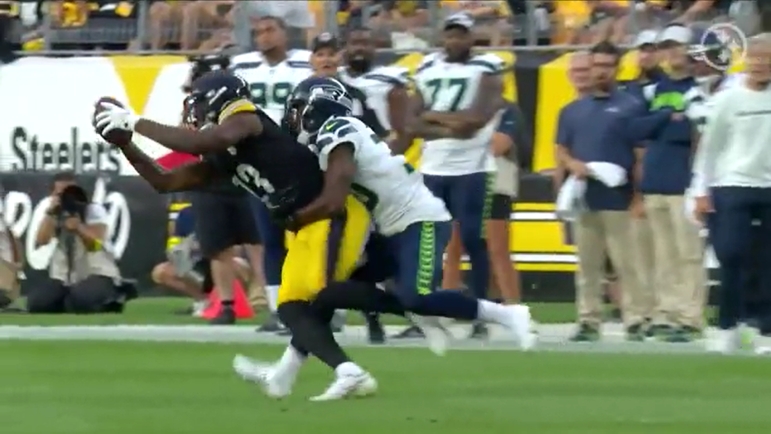 After the initial panic following the departures of JuJu Smith-Schuster, James Washington, and Ray-Ray McCloud via free agency, it is now clear as the Steelers approach the start of the regular season that they do, in fact, have some encouraging depth at wide receiver.

Indeed, there is a fairly contentious battle for the sixth wide receiver spot, with arguably five of them already having been claimed. Diontae Johnson, Chase Claypool, and rookie second-round pick George Pickens are as safe as safe can be, but fourth-rounder Calvin Austin III and Gunner Olszewski are also very likely safe bets, as well.

Then it comes down to the field, which includes an interesting mix. Miles Boykin, with his contributions on special teams not to be overlooked, may be the most notable, but Steven Sims also provided us with a reminder that he is not to be ignored, with a big play on both special teams and offense. Anthony Miller has ground to make up after missing the first preseason game.

Outside of veterans, there is also Tyler Vaughns, a member of the practice squad last year (along with Miller and Sims), who has been consistently making plays in training camp and also showed up in the preseason debut, including on the game-winning drive.

Out of the field, Boykin is the one they have been most aggressive about. They claimed him off waivers back in February or March, knowing that he is due a couple million. He was a player they coveted coming out of the draft.

He only had two catches for 17 yards, but they were both quality catches, including a nice hands catch for a third-down conversion, and he also had two tackles on special teams, forcing a fumble. Is he now the leader in the clubhouse for a potential sixth wide receiver spot, assuming they carry that many, if he wasn’t already?