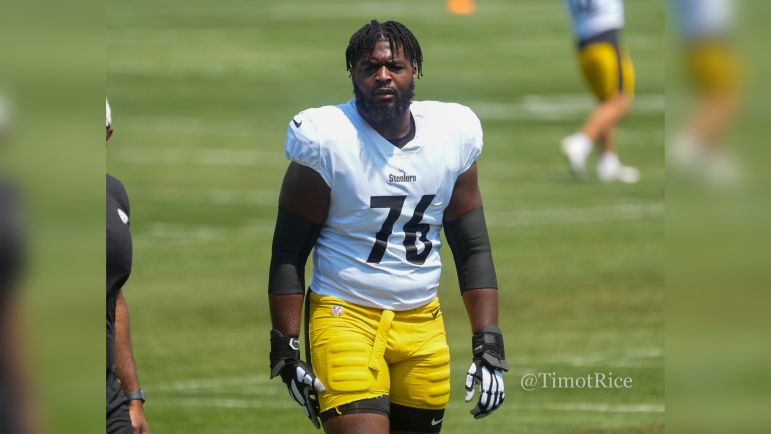 With that in mind, we’ll look at the team’s offensive tackles.

Chukwuma Okorafor: One of the few bright spots along the offensive line this summer, Okorafor was arguably the team’s top offensive lineman. Granted, that isn’t saying much but Okorafor’s play was good-enough. Facing T.J. Watt on a daily basis will do that – I wouldn’t say iron vs iron but iron vs…copper? – and when he faced someone else, like Delontae Scott, Okorafor looked good. Again, expected. Make no mistake, Watt beat Okorafor bad several times, especially in team drills, but it’s the toughest challenge Okorafor faces all season. Makes going against other guys, like Jaguars’ #1 overall pick Travon Walker, a bit easier.

I wouldn’t say Okorafor’s game is too terribly different than a year ago. He’s pretty much maxed out as an average right tackle with good feet but below average strength. Despite being one of the few linemen to have three different o-line coaches in three years, Shaun Sarrett, Adrian Klemm, and now Pat Meyer (he also was a rookie in Mike Munchak’s final year), he’s adjusted well to the new scheme. I’ve said it before and I’ll say it again. Okorafor is the best lineman on a bad line and the worst on a good one. Right now, he’s still the former. A depressing thought.

Joe Haeg: Haeg’s been steady and generally inoffensive which feels like he should move to the top of the class. He played well against Seattle, a veteran with experience playing different spots and in different schemes. He’s seen and done it all at this point. Despite his ok play, his spot and role on the team feels less certain than it should be. Trent Scott’s eaten into his time and Haeg is currently in concussion protocol, missing the Jaguars’ game because of it. It’s not impossible Meyer vouches for Scott over Haeg. Haeg isn’t expensive but if you want a surprise cut for some cap relief, it’s not crazy to mention his name, though I’d be against the idea. Haeg has good size and runs his feet to displace defenders in the run game. His pass protection is average to below but I’d trust him to temporarily step into the lineup, something more important given Moore’s severe struggles. But he isn’t a long-term answer to replace Moore this season or next.

Trent Scott: Scott’s never been a guy I’ve been enthused about. But he’s been coached by Meyer his whole NFL career with the Chargers, Panthers, and now following him to the Steelers. He’s a poor athlete who struggles mightily with speed rushers and is someone who is going to get his quarterback hit. A lot. Scott had a rough outing in the opener but to his credit, improved in the second game versus Jacksonville. He’s one of the few linemen on this team comfortable with Meyer’s system because he’s been in it so long. He works independent hands, he gets the system, and he had a couple of positive moments because of it. Put it this way – Scott’s hands are better than his feet. With his familiarity, I could see him sticking around the Steelers have given him lots of playing time this summer, even splitting first-team reps with Joe Haeg during the one day Okorafor missed practice. But if he gets into a game, look out.

Jake Dixon: A local product from Duquesne, he signed as an UDFA. Dixon showed versatility early on in camp, playing both tackle spots and also seeing work at guard as the Steelers shuffled their line around more than they have in recent years. Dixon played with a mean streak and finished his blocks. His most memorable moment came at the end of a practice, mixing it up with DL Khalil Davis at the end of a pass play. Standing on the sidelines, twin brother Carlos Davis saw it, sprinted over, and absolutely ear-holed Dixon, truly a blindside hit and dirty play, creating a big scuffle to end the day’s work. Dixon’s overall play didn’t seem like anything special but he didn’t seem like a liability and had a better camp performance than say, Jordan Tucker. But Dixon was part of the team’s initial cutdowns, 90 to 85, and he remains a free agent.

Dan Moore: Like Okorafor and Watt, Dan Moore and Alex Highsmith had solid battles early on before Highsmith’s camp ended with a rib injury. Some good 1v1 reps and Highsmith got to work on his inside spin against him in team sessions. But Moore’s play tanked once the games began. Some tougher matchups, sure, but that’s the life of a left tackle. No excuses. Moore is struggling as much as anyone following Meyer’s philosophy. Kendrick Green is even doing a better job adhering to it though he’s struggling just as much. Moore’s pass sets aren’t aggressive enough and he’s not using independent hand punches as much as he should, falling back on two-hand punches that are missing too often. In pass pro, his initial punch is bad and he’s catching too many rushes, in part due to his lack of aggression. Moore still lacks the power to handle bull/power rushes and isn’t using Meyer’s hop step enough to stall them out.

The “first significant contact” coaching point Meyer builds everything around has been Moore’s biggest issue. He’s young and dealing with a new o-line coach so hopefully, he gets better with reps and mistakes. But there are fundamental issues in his game and he looks like a guy who isn’t playing with a lot of confidence right now. He’s a hard-worker and a plus athlete but for his and the Steelers’ sake, he needs to turn his game around. Not even his run-blocking is looking all that effective compared to last year when he pushed his weight around a bit. He can’t struggle like this during the regular season and give the Steelers a chance to succeed. Major concern here.

Jordan Tucker: An undrafted rookie out of North Carolina, Tucker brought size and a bit of versatility to the NFL. But he never saw a snap along the line inside a stadium. The most he did was play on the field goal kick team. All we can do is go off of camp and what I saw wasn’t impressive. He struggled with balance and was always on the ground. He wasn’t explosive and struggled with leverage, once being forklifted 3-4 yards into the backfield on a run play. On the first day he was signed, OLB Ron’Dell Carter got off the bus and schooled Tucker in three straight reps. Tucker was overwhelmed and overmatched and might’ve been the worst lineman in camp, though expectations for him weren’t high to begin with. He was released when the team added Adrian Ealy post-camp.

From years ago, Emmanuel McCray remains my gold standard of bad offensive lineman but Tucker was in striking distance. This is a harsh report but this is a harsh game and that’s the reality of how his summer went.