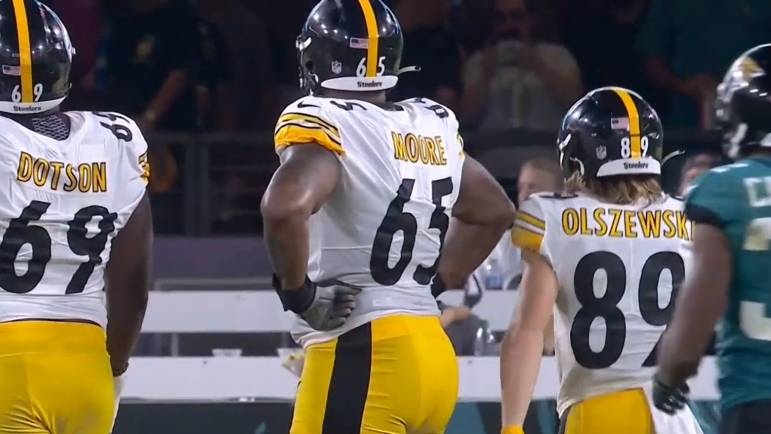 Reasoning: The second-year left tackle is giving his doubters ample ammunition to pound the table and insist that they were right all along that the position was the Steelers’ number one need this offseason, which they completely (or essentially completely) failed to address.

If Dan Moore Jr. is going to be the Steelers’ left tackle of the future, he’s going to have to burn the tape from the past two preseason games and chalk it up to growing pains, because he has been among the worst players on the field.

I say that as somebody who skewed toward optimism about him potentially growing into a competent left tackle. He seemed to start off well enough during training camp, albeit not without hiccups, but in-game thus far, he has been a significant liability.

I wrote yesterday that the only reason I didn’t get to Moore first was because I didn’t want it to overlap with our film room piece on him running the same day. So I set my sights on Kendrick Green first—unfortunately, another worthy target.

Now I’m back to highlight Moore, who at this point may be the biggest thing standing in between Kenny Pickett’s starting future if the team simply doesn’t want to expose him to such poor offensive line play. That is the narrative that has been building in the wake of the rookie quarterback’s strong play, the idea that the team may only be reluctant to put him in right away because of the line.

Well, that group isn’t helping its cause, and no matter how much Mike Tomlin might embarrass them in the film room, the only thing that’s going to make a difference is what they do on the field this Sunday. They simply have to do better.

The truth is, Moore did have some competent games last season. He did exhibit traits that one could project as potentially starter worthy. He’s not showing them very often right now, but the Steelers don’t even have anybody else. How much of it is the changeover in line coach? Is he adjusting to Pat Meyer’s teachings? Is that just an excuse? How much better is he going to get, and how long will it take to get him there? Because it can’t come fast enough.