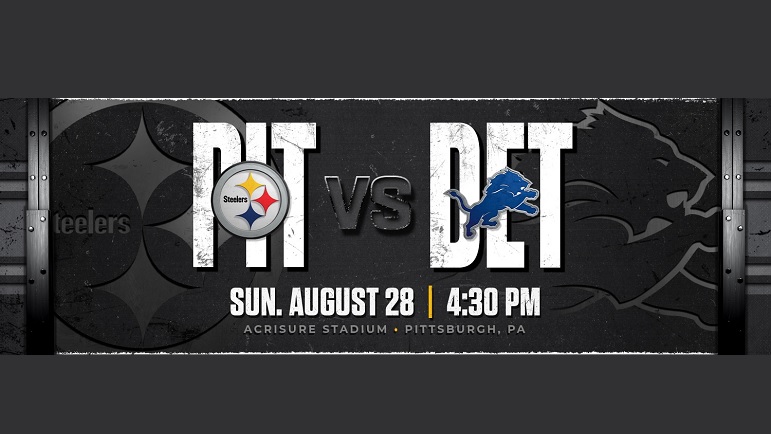 The Pittsburgh Steelers are set to host the Detroit Lions in Pittsburgh at Acrisure Stadium in just under an hour. In the final preseason game before the start of the regular season, many roster battles are to be decided. The final 53 man roster will be announced the following Tuesday, so players are making their final push. Some are vying to become the starter, while others are fighting for a job on the 53 man roster, or even the practice squad.

Both teams appear to be treating this as a tune-up game with starters projected to play for some or all of the first half. Even guys like Najee Harris, Cameron Heyward, and TJ Watt should see a handful of snaps. Fortunately for Steelers fans, the Lions are on HBO’s Hard Knocks, so there should be some behind the scenes Steelers footage in a future episode to look forward to.

The quarterback rotation should look very similar to last week with Mitch Trubisky getting the start followed by Kenny Pickett and Mason Rudolph, though the division of labor in terms of snap count could look quite different. Trubisky and Pickett are competing for the starting job, while Mason Rudolph has trade rumors buzzing around the league about him.

Thank you for joining us for this week’s game thread. Refresh the page throughout the game for curated tweets, interesting stats and more. Also, be sure to check out the comment section at the bottom of the page for a real-time discussion with other Steelers fans.

Should the rookie be QB1? 🤔

2022 Preseason Week 3 Steelers vs Lions – What To Watch For https://t.co/qshpUlH97H #Steelers pic.twitter.com/8tHqlLP9bV

Steelers OLB T.J. Watt on life after QB Ben Roethlisberger and what to expect from the Steelers in 2022. #Steelers #NFL pic.twitter.com/LkDRCvgvMO

The Steelers won the coin toss and elected to defer. Lions will start with the ball.

The first drive ended by TJ Watt, darting into the backfield for the easy tackle for loss to kill the drive for the Lions.

Gunner Olszewski back to receive the punt. He got away from the first two defenders and made it to about the 22 yard line.

Najee Harris went up the middle on the first play of the drive. He gained about 3 yards. Trubisky couldn’t find anyone open downfield on the bootleg pass and drifted out of bounds for a loss of 1. 3rd and 8, Trubisky failed to bail out of the pocket and got bulled over as his pocket collapsed. The receivers were not very open downfield.

Another look at Lions 3rd down sack #Steelers #NFL pic.twitter.com/9GKn9iQxkt

Larry Ogunjobi tackled the ball carrier on 1st down for a gain of just one. Cameron Heyward batted down the ball on 2nd down. On 3rd, the pass fell incomplete with multiple Steelers in coverage. Quick three-and-out for the Lions.

Steven Sims received the punt this time and called for a fair catch. Steelers get the ball at their 15. The Steelers slowly losing the field position battle. Trubisky has a long field ahead of him.

Pat Freiermuth caught the first down pass for a gain of five. Najee Harris tackled for a loss on 2nd. Prior to the snap on 3rd down, Aidan Hutchinson called for neutral zone infraction, so a manageable 3rd and 2 now. Trubisky in shotgun with a deep pass to the left sideline, through heavy coverage and Diontae Johnson caught the 38 yard pass.

On 1st down, Harris rushed for 11 yards off left tackle. Back to Harris on the next play for a dump off pass resulting in 9 yards. 2nd and 1, Trubisky found Miles Boykin for 5 yards and a fresh set of downs.

Dan Moore Jr. called for offensive holding. 1st and 20, Gunner Olszewski on a jet sweep for 12 yards. Dan Moore called for another holding call. 2nd and 18 and Moore has them moving in the wrong direction. Deep left to Gunner Olszewski in the end zone, but the pressure made the throw slightly off target. Kevin Dotson called for a false start, so 3rd and 23. Najee Harris for no gain on the 3rd down pass. The Chris Boswell kick is good, but a penalty is down. Declined. 3-0 Steelers.

Dan Moore called for his second hold today. First one was more forgivable but that one stopped a would-be sack. He's worked independent hands a bit better today but overall results aren't there. #Steelers

The three most recent offensive line draft picks for the Steelers have truly had an awful preseason as it continues to be the biggest question mark for this team in 2022.

Ok, Najee Harris knocked the rust off. Get him out of there, Mike #Steelers #NFL

Diontae Johnson entered the blue tent to be looked at. That was a rough landing on that deep completion. Hopefully he is okay.

The kickoff was returned to about the 40 yard line, but a penalty marker is down. Facemask on the Steelers and holding on the Lions. Offsetting penalties, and the ball goes to the spot of the holding. Lions start at their 20 yard line.

The Lions ran up the middle on 1st down for just 2 yards. Heyward and Tuszka in on the tackle. Holding called the next play, so 2nd and 18 for the Lions. Ahkello Witherspoon made a nice play to tackle the catch for just a one yard gain. 3rd and 17 for the Lions, Jermar Jefferson picked up 27 yards for a long conversion.

Diontae Johnson is out for the rest of the game with a shoulder injury. Hopefully just as a precaution, but we will know more later.

On 1st and 10, Justin Jackson picked up 2 yards up the middle, stopped by Witherspoon. Cam Sutton allowed the catch to St. Brown for 9 yards.

The Steelers are pretty banged up at what was once one of their deeper positions. Diontae Johnson, Chase Claypool, Calvin Austin III, Anthony Miller. This will certainly leave room for guys like Tyler Vaughns or Steven Sims to make the team.

Boyle was sacked on 1st down by Minkah Fitzpatrick. Cam Heyward batted the ball into the air for the second time of the game. Could have probably picked that one off, but it fell to the ground. On 3rd and 15, Cameron Sutton intercepted the ball and returned it 17 yards to the 19 yard line. Trubisky gets a red zone look, probably a valuable situation for Tomlin to see him in.

Najee Harris still in the game. Mike Tomlin not living in his fears. Najee was tackled for a loss on 1st. Trubisky complete short to Steven Sims on 2nd for 5 yards. 3rd and 7, Trubisky attempted a pass deep right for George Pickens, but it was well defended. The field goal unit is out. The Boswell field goal is good. 6-0 Steelers.

Here is the INC pass to Pickens #Steelers pic.twitter.com/9MKJEnQZPX

That is a datapoint for Mike Tomlin to consider as Trubisky got a red zone attempt. Even more of an emphasis in sudden change after the interception. Kenny Pickett has an important hour ahead of him.

The Chris Boswell kickoff was just short of the goal line and was returned to the 16 yard line. Mark Robinson with the special teams tackle. Great sign for Robinson.

Myles Jack made the tackle out in the flat to limit the first down pass to 1 yard. 2nd and 9, Levi Wallace and Derrek Tuszka stuffed the rush attempt for 1 yard. 3rd and 8, Blough scrambled up the middle for 7 yards. Cameron Sutton tackled him just short of the line to gain. The Lions attempted the rush on 4th and short, but Devin Bush made the stop with a tackle from behind.

Another red zone chance for Trubisky coming here. George Pickens caught the ball behind the line of scrimmage and dove forward for no gain. On 2nd Jaylen Warren went around the right end for 5 yards. 3rd and 5, Pat Freiermuth dropped the pass. Chris Boswell’s kick was good. 9-0 Steelers.

The kickoff was returned for a healthy 44 yards, but holding brings it back again.

1st and 10, Blough complete to St. Brown for 7 yards. Edmunds in on the tackle. 2nd and 3, a big run for Justin Jackson, but holding brings it back. 2nd and 13, the pass fell incomplete with Minkah Fitzpatrick in coverage. Mike Tomlin really getting some work here for his guys. Hopefully no more injuries. 3rd and 12, St. Brown complete for 18 yards.

The Steelers have been failing on 3rd and long situations. They had similar struggles last year.

On 1st and 10, Delontae Scott sacked Blough for 7 yards. 2nd and 17, pass fell incomplete. 3rd and 17, another incomplete pass with Terrell Edmunds in coverage. Nearly picked off. The punt resulted in a touchback.

TJ Watt out with what appears to be a left leg injury. Two key players hurt in this final preseason game. We won’t know the severity until later.

Guessing this might is what lead to Watt going to the locker room. Hope it is nothing serious. #Steelers #NFL pic.twitter.com/WqtrSLjjaK

Just three first downs for this Steelers offense so far. That is two straight weeks with Mitch Trubisky’s unit struggling.

1st and 10, George Pickens for 13 yards shaking the first defender for extra yards. The drive stalled out again. Pressley Harvin punted the ball 50 yards. The ball was not returnable.

On 1st and 10, Justin Jackson ran for a 10 yard gain. The Steelers thought they had the ball on a fumble at the end of the play, but the refs did not agree.

Robert Spillane in coverage on 2nd down to force the incompletion. 3rd and 8, Blough pass incomplete deep. Minkah Fitzpatrick in coverage. Nearly picked off by Minkah.

Mitch Trubisky has faced two tests with red zone opportunities after turnovers without any touchdowns. He gets a chance to salvage his day here with a two minute drive to close out the half. This is a scenario Pickett has thrived in during the preseason.

The offense found a spark with a deep pass to George Pickens on 3rd down for 22 yards. The next play a deep 32 yard pass to Pat Freiermuth in the middle of the field.

Capped off the drive with a short crosser to Steven Sims for the touchdown. 16-0 Steelers.