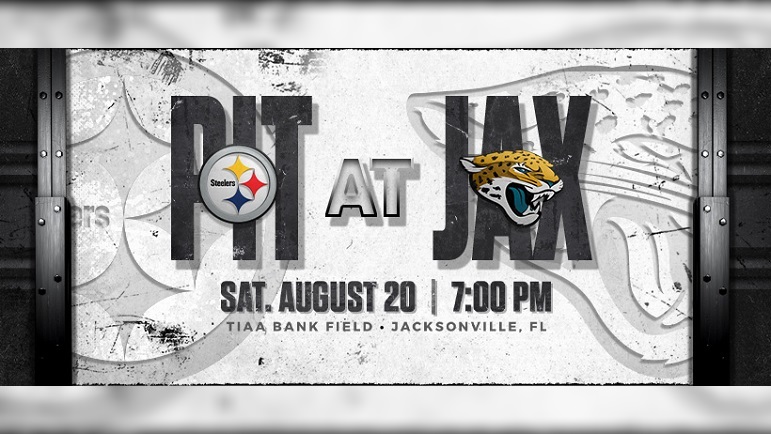 Welcome to the Steelers Depot game blog for the second preseason game of the 2022 NFL season. With the preseason being just three games long now, this game will act as the ‘tune up’ game where both teams’ starters get a little more burn than usual. Instead of just a couple drives for Mitch Trubisky, he will likely play most of the first quarter, and the team announced that Kenny Pickett would get the first reps off the bench this week. That means we will get to see Pickett playing with, and against, higher quality players.

The Jacksonville Jaguars will also have their eyes peeled as they watch former first overall draft selection Trevor Lawrence against the formidable Steelers starting defense.

I wouldn’t expect 100% participation from the healthy starters, as certain veteran players might be held out of the action. For instance, Cam Heyward traveled with the team, but I doubt he ends up playing in the game following an ankle injury scare on Thursday’s practice.

Thank you for joining us here for the game! Be sure to refresh the page throughout for curated tweets, interesting stats, and live updates. Also, scroll down to check out the comment section where fans gather to discuss the action in real-time.

2022 Preseason Week Two Steelers vs Jaguars – What To Watch For https://t.co/xxlyhCT6iD #Steelers pic.twitter.com/H7kxLEC3hD

Cameron Heyward and Najee Harris will not play Saturday night versus the Jaguars, per @missi_matthews on pre-game radio show. She said that is what Mike Tomlin told her earlier in day. #Steelers #NFL

Coach Tomlin confirmed no Cam Heyward or Najee Harris tonight for the #Steelers.

The Steelers will get to see their newly extended Diontae Johnson for the first time since signing.

Former member of the Jaguars, Myles Jack, was made the captain for tonight’s game on the Steelers side.

Benny Snell Jr. out with the first team. A good sign for him after missing last week’s game. A check down pass to Snell on first down, complete for about 4 yards. An incomplete deep pass on 2nd down to Diontae Johnson, a bit of an awkward throw, but Trubisky was able to connect for a 29 yard gain to Chase Claypool.

Chase Claypool excelling from the slot would be huge for the Steelers offense. Need more plays like this. pic.twitter.com/SkhLHpJf9R

Snell up the middle for a loss of 3 on first down. Trubisky evaded pressure and scrambled for 10 yards on the ground to make it 3rd and manageable. On 3rd down, Trubisky escaped a sack to extend the play, delivered an impressive pass, but it bounced off the hands of the receiver and was intercepted. Play is under review. The interception was reversed. Chris Boswell in for a 53 yard attempt, it bounced off the left upright.

Ahkello Witherspoon and Levi Wallace the outside corners in nickel. Cam Sutton in the slot. Witherspoon/Sutton the corners in base. Arthur Maulet is out tonight and could play on early downs this season. #Steelers

The defense allowed a reception on 3rd down over the middle for a conversion. Devin Bush cut under the quick screen, but the Jaguars picked up 6 yards on the play. 3rd and 4, Trevor Lawrence missed Christian Kirk for an easy first down. 51 yard field goal attempt for Ryan Santoso, but it narrowly missed. The game is still scoreless.

Kevin Dotson in at LG this series. Looks like he and Kendrick Green will rotate the way they have during the preseason. #Steelers

Benny Snell back in on the second offensive drive. A toss play resulted in a loss of one. Benny Snell dropped the pass on 2nd. Trubisky was under pressure, but it was a catchable ball. Trubisky was sacked on 3rd. The offensive line is taking a beating to this young and talented Jacksonville front.

Pressley Harvin III’s first punt of the season was just 41 yards. It was muffed by Laviska Shenault, but he ended up recovering.

On 1st down, Travis Etienne met at the line of scrimmage by Myles Jack and Terrell Edmunds for no gain. Trevor Lawrence found Marvin Jones wide open in the flat for a gain of 16 and a fresh set of downs.

Near midfield, TJ Watt in for the sack on first down. He ripped under the offensive tackle for an easy sack. On 3rd and 8, Trevor Lawrence scrambled for a 12 yard pickup and another fresh set of downs.

Myles Jack tackled the catch of Christian Kirk to limit the play to just 5 yards on 2nd down. Trevor Lawrence incomplete on 3rd and 6, so the Jaguars will bring out their kicker.

Gunner Olszewski back to return the kickoff, but it bounced through the back of the end zone for a touchback.

Trubisky and Snell back in the game for the Steelers with just a couple minutes left in the first quarter. On 1st, Snell with a run for two yards up the middle. Trubisky found Diontae Johnson f or 16 yards on 2nd. A great route and catch by Diontae.

Trubisky in shotgun and he found Diontae Johnson. Diontae was called for pass interference. A pretty weak call, but the Steelers now at 1st and 20. Jaylen Warren in the game up the middle for 4 yards. Fatukasi injured on the play for the Jaguars. 2nd and 16, Trubisky connected with Warren on a wheel for 6 yards. 3rd and 10 upcoming, and possibly for Kenny Pickett.

Trubisky back in to finish off the drive at the start of the 2nd quarter. Trubisky found Jaylen Warren on the check down pass for just 5 yards. Benny Snell with a big time special teams tackle. Harvin III punted for 47 yards with a short 5 yard return, nice hangtime on the punt.

The Jaguars starting from their own 10 yard line. On 1st, a Trevor Lawrence pass finds his receiver for just 3 yards tackled by Ahkello Witherspoon. Travis Etienne went up the middle for 10 yards on 2nd down.

1st and 10, Tyson Alualu made the tackle on Travis Etienne for 3 yards. Cam Sutton nearly picked off the pass, but couldn’t quite jump high enough. A well placed ball by Trevor Lawrence for a gain of 14.

Snoop Conner up the middle for no gain with Damontae Kazee and Larry Ogunjobi with the stop. Marvin Jones gained 10 yards through the air with Robert Spillane in coverage. The Jaguars sustaining a drive here.

Travis Etienne ran through the Terrell Edmunds arm tackle for a few extra yards on 1st. 2nd and 7, Zay Jones picked up 12 on a quick out.

1st and 10 just outside the red zone, Travis Etienne picked up 1 yard, stopped by Spillane. Alualu batted down the 2nd down pass to bring up 3rd and 9. Christian Kirk picked up 22 yards, beating Levi Wallace.

Now firmly in the red zone, Snoop Conner picked up 3 yards up the middle. Conner again for just 2 yards on 2nd. 3rd and 5, Trevor Lawrence missed his receiver near the left sideline of the end zone. Santoso back out for the short field goal. 6-0 Jaguars.

The Steelers defense has been on the field most of the game at this point and they have held up okay, but Trevor Lawrence carved them up a bit on that drive.

Gunner Olszewski returned the kick to the 28 yard line. Perhaps Kenny Pickett is due to check in to the game, though I cannot imagine Mike Tomlin is satisfied with Trubisky’s output.

Pickett is indeed in the game. First play complete to George Pickens for 6 yards. The Steelers called for illegal shift with two players in motion at the same time. Claypool and Olszewski moved, so one of the two at fault. 2nd and 9, but a timeout called by Mike Tomlin on the sideline.

Not 100% sure but I think Claypool was correct jetting across and Olszewski wasn't.

Pickett found Chase Claypool for the first down, but James Daniels called for holding. 3rd and 18 for Kenny Pickett. Maybe they will send him for his first deep attempt here. Anthony McFarland made the catch across the middle of the field, but only picked up 7 yards.

Pressley Harvin III back in the game to punt. A 42 yard punt for Harvin returned for -1 yard. Spillane in for the special teams tackle.

Devin Bush made the stop for no gain on 1st down, but Christian Kirk ended up converting on 3rd and 4 with a 11 yard diving reception.

On 1st and 10, Snoop Conner stopped by Delontae Scott and Hamilcar Rashed for no gain. The defense has rotated out much of the starting lineup. Conner received the short pass and turned up field for 10 yards.

3rd and 7 for Trevor Lawrence and the Jaguars offense. 1:16 to go in the half. He scrambled for just 1 yard. Damontae Kazee made the tackle on Evan Engram for just 2 yards on 4th. Turnover on downs.

Kenny Pickett hit Diontae Johnson on the crosser for 18 yards. It could have potentially went the distance, but Diontae got shoestring tackled.

Pat Freiermuth got involved with another 1st down pickup. The Steelers spiked the ball to kill the clock.

On 2nd and 10, Pat Freiermuth picked up 24 yards with a great pass by Pickett while under pressure. Timeout #3 by the Steelers.

Pickett found Diontae Johnson in the endzone for a touchdown. Offsetting penalties make it a redo. Bummer for the rookie, but he gets a couple more chances here at the end of the half. On 1st and 10, Pickett hit Benny Snell in the flat who drug the defender and dove for the pylon. Looks like a touchdown to me. Boswell point after attempt is good. 7-6 Steelers.

Kenny Pickett continues to pass every test thrown at him.