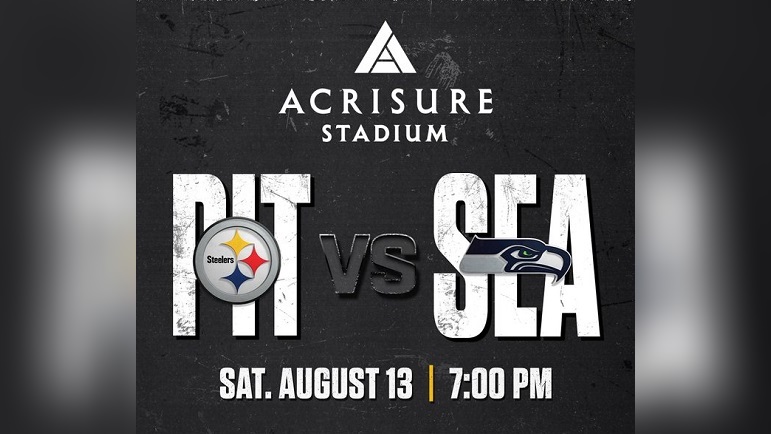 With just under an hour until kickoff, the Pittsburgh Steelers will host the Seattle Seahawks at the newly named Acrisure Stadium. Both teams are entering a new era without their franchise quarterbacks of the past, so all eyes will be on the quarterback play. The Steelers have already announced that Mitch Trubisky will start the first preseason game and Mason Rudolph will be first off the bench. That leaves first round draft selection, Kenny Pickett, as the third option entering the first week of preseason play.

For the Seahawks, Russell Wilson is now in Denver which leaves Geno Smith and Drew Lock to battle for the starting position. Those names will make the most headlines given the nature of the quarterback position, but there are plenty of other highly anticipated position battles to watch.

If you are new to the Steelers Depot game blogs, you can scroll down to the comment section to join in on the discussion with other Steelers fans. Be sure to refresh the page throughout the half as I curate interesting tweets, live updates, injury news, and more. Thank you for hanging out with us here on the site, and enjoy the game!

And his play has been excellent. That's the kind of summer he's having. #Steelers

Not playing Saturday night per @missi_matthews

Steelers have won the coin toss and have elected to receive. #Steelers

Anthony McFarland Jr. was back for the kickoff. He returned it to about the 28 yard line, but a penalty flag was thrown. Illegal double team block against the Steelers, so Mitchell Trubisky will start his first drive as a Pittsburgh Steeler backed up in his own end.

The first pass was complete to George Pickens for about 9 yards. Kevin Rader was targeted on 2nd and nearly brought the high pass in before the ball fell incomplete. McFarland Jr. bounced the run to the outside for a big Steelers first down. George Pickens made a nice block on the perimeter. Personal foul called on the Seahawks, so the Steelers suddenly find themselves near midfield.

Gunner Olszewski converted on 3rd down with a nice move after the catch and then the next play caught a touchdown pass from Mitch Trubisky. A great first drive for Trubisky in Pittsburgh. 7-0 Steelers.

The Steelers defense letting up a couple big plays on their first two chances. Geno Smith is getting the start for the Seahawks.

Karl Joseph, who had been having a nice camp, is being tended to on the sideline on the cart. Hopefully nothing serious, but I will update you as more information comes in.

On 3rd and 6, the Steelers caused a little confusion pre-snap, so Geno Smith called the timeout. Smith tried to scramble out with nobody open downfield. Henry Mondeaux was able to bring him down – could probably call that a coverage sack.

Trubisky at quarterback again for the second drive. A gain of 16 with a tight window pass to Connor Heyward.

On 1st, Anthony McFarland Jr. with some nice footwork in the backfield to create a 7 yard gain. On 2nd, he punched it up the middle for a gain of 5 and a new set of downs. Now into Seahawks territory.

Gunner Olszewski and George Pickens still out wide as they were last drive.

Jaylen Warren now on the field. Trubisky took a big shot in the backfield, but shrugged off the contact and raced to the boundary for a gain of a few. Could have been a big loss. Trubisky nearly found Olszewski on 3rd down, but just barely missed. The punt was bobbled by the Seahawks, but they recovered.

The Seahawks will take over at their own 9 yard line. Cameron Nizialek with the first punt for the Steelers.

And I'm not mad at Ben for that. His knees were shot. Ben brought a lot that can't be replaced in one game, one year. But it's nice to see a mobile QB and the rewards you get. Mike Tomlin talked about it all last year.

Ahkello Witherspoon and Devin Bush in on the tackle on 1st down. Witherspoon down injured after the play, but it doesn’t look major, maybe a stinger? Witherspoon with a smile coming off the field. He is likely done for the day, but he should be just fine.

Myles Jack stuffed Kenneth Walker for a small gain on 2nd.  On 3rd down, Derrek Tuszka held the edge well and there was nowhere to go. The Seahawks punt and Steven Sims returned it 38 yards. The Steelers will have great field position to take over.

Mason Rudolph took over for this drive. Dan Moore Jr. was beat soundly and Mason was sacked instantly. Nearly a fumble. On 2nd, McFarland Jr. with a delayed handoff for a gain of 7. The Steelers in a tough 3rd and 13 situation. Mason Rudolph lofted it up to George Pickens with a perfect throw to the corner. Pickens brought it in for the touchdown! 14-0 Steelers.

Travis Homer was wide open underneath on the dump off for a gain of 25. Homer with another big gain the next play. Some over pursuit by the defense.

Mason Rudolph back in at quarterback. Jaylen Warren with the carry on 2nd down for a few yards. Gunner Olszewski converted on third down. Connor Heyward backed the team up 5 yards, but gained it back with a catch on 1st down. George Pickens getting both feet inbounds on 2nd to convert.

Mason Rudolph dialed up another deep ball to George Pickens, but it fell incomplete. Miles Boykin with a strong contested catch to convert again. Four for five on third downs now.

Jaylen Warren picked up another first down after shrugging off multiple defenders. Penalty on the defense, but declined. Mason Rudolph made a poor decision throwing a pass in heavy coverage, but the defender dropped the interception.

Jaylen Warren showing off his stuff again with power to run through contact. McFarland and Warren both have looked great tonight. Miles Boykin targeted in the end zone, but good coverage and he couldn’t secure it. Maybe some interference, but it was close. 2nd and goal, Warren punched through the scrum for a short gain. On 3rd and goal, Mason tried to force the ball into a crowded area and it fell incomplete. His internal clock was just a couple seconds too quick. The Nick Sciba field goal is good. 17-3 Steelers.

Miles Boykin in on the kickoff unit and he made the tackle at the 23 yard line. Arthur Maulet had an excellent stop on 3rd down and the Steelers will get one more chance before the half. I would guess it will be Mason Rudolph and then Kenny Pickett will get most, if not all, of the second half.

Mason Rudolph’s pass was batted down at the line of scrimmage. Now 3rd and 10, Rudolph found Jace Sternberger for a gain of 8. Not quite enough for a first down. Mason delivered the pass despite taking a big hit.

The Seahawks are driving to try and make this closer going into the half. Demarvin Leal couldn’t quite finish the sack which led to a big play for Geno Smith.

Tre Norwood in coverage on the incomplete pass on 1st down. On 2nd and goal from the 7 yard line, Travis Homer picked up 5 yards on the ground. Geno Smith scrambled in for the touchdown. 17-10 Steelers.