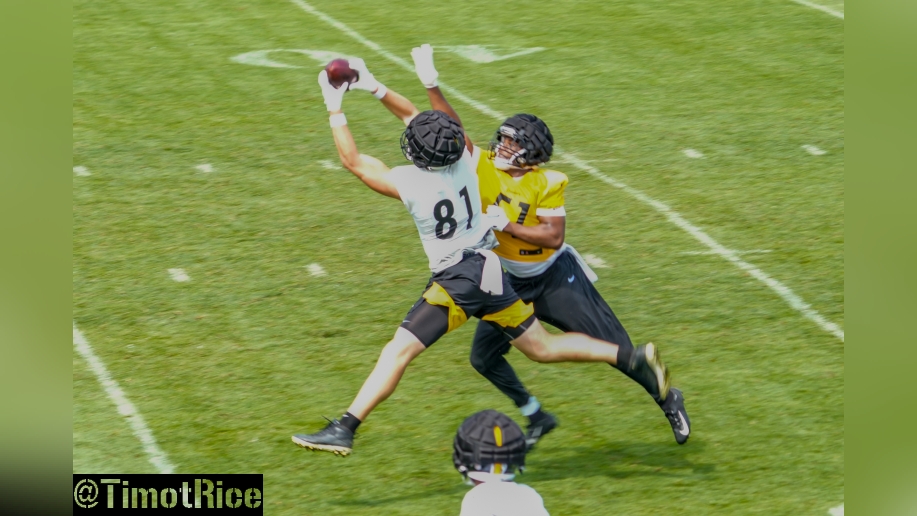 First impressions tend to leave a lasting impression that is hard to displace. That is the case for many Steelers fans, including myself, regarding TE Zach Gentry, who appeared to be a bust after his first couple seasons in the NFL. A former fifth-round draft pick out of Michigan back in 2019, Gentry struggled to adjust to the NFL game initially coming out of college, playing 49 offensive snaps in his rookie season and had a knee sprain result in him landing on IR in 2020 having only played 20 offensive snaps.

Zach Gentry is a rigid player whose height hinders his release, but this is a pretty hands catch. Know drops were a worry at UM but nice grab here for a long gain vs SMU. #Steelers pic.twitter.com/Te2rkBWTJG

However, Gentry managed to step into the TE2 role in the offense last season after Eric Ebron went down to injury, causing Pat Freiermuth to ascend to TE1 on the depth chart. Gentry saw his snaps jump to 473 on offense with an additional 139 on special teams, and caught 19 passes on 25 targets for 167 yards.

Coming into 2022 having made some flashes in training camp down the seam as a pass catcher, Gentry isn’t shy saying that he can be a capable pass catching option for Pittsburgh heading into Year Four with the team.

“It’s one of those things I haven’t done a whole lot at this level,” Gentry said prior to practice Saturday via video from the team’s website. “I was a big seam catcher in college and everything, so it was something I knew I was capable of doing, but it’s something I’ve been kind of honing and working on the last couple of years.”

If I’m going to be honest, I personally did see Gentry as a draftable TE coming out of Michigan in 2019. Sure, the 6’8″, 265 lb. frame is extremely enticing as a big-bodied red zone/possession style receiver, but the lack of athleticism and the rawness in various aspects of his game had me off of him completely, thus making me disappointed when Pittsburgh elected to use one of the draft picks acquired from the Antonio Brown trade with the Raiders to select him in the 2019 NFL Draft.

Gentry struggled out of the gate which was something we should have expected from a rookie TE that had only converted from playing QB a few years prior. In fantasy football, the expectation is often that rookie TEs shouldn’t be expected to produce until year three or four in the league, and that is for the high-pedigree prospects. Gentry definitely wasn’t a high-pedigree guy, so I probably should have had more grace when it came to his development. He mentioned as much speaking to the media above, saying that he knew that he was a pass-catching TE in college, but needed time in the league to hone his skills to match the demands of the position at the NFL level.

Heading into his contract year, Gentry now sees the opportunity to serve as a well-rounded TE for the Steelers this season, having the chance to showcase his development as a pass catcher to hopefully earn himself a nice pay day after the season.

“I think I’m very capable in that field,” Gentry continued. “Like I said, I did it a lot in college. I think when I’ve given my opportunity the last couple years, I’ve been able to execute. So I think I’ll be just fine.”