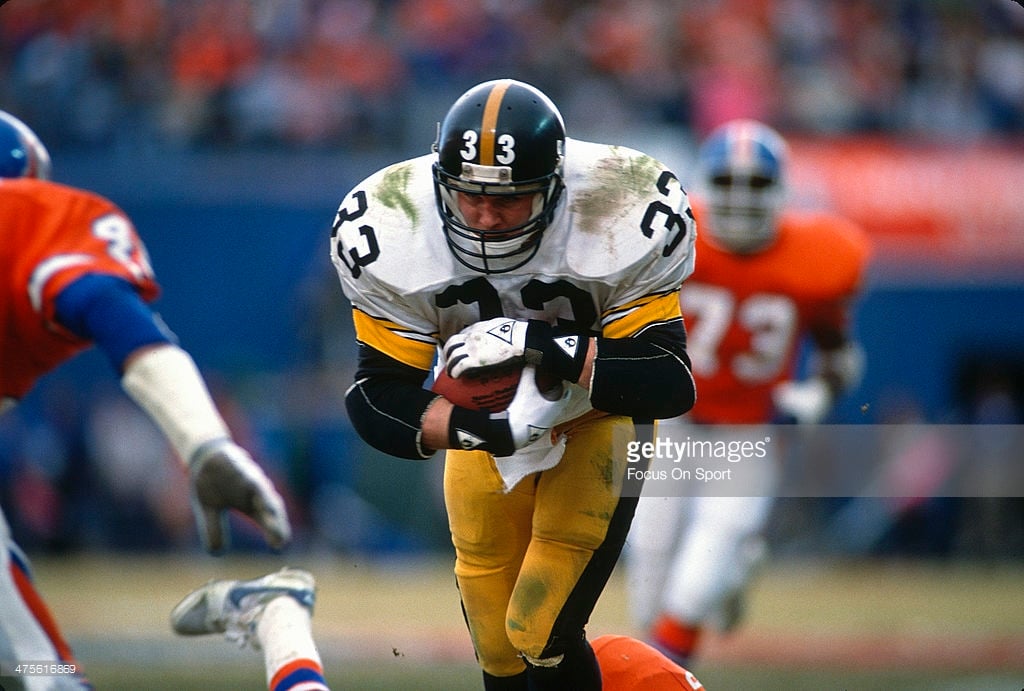 While listening to Friday’s edition of The Terrible Podcast with Dave Bryan and Alex Kozora, a question was raised in the mailbag at the end of the show regarding one former Pittsburgh Steeler that has been in the news recently in a rather negative light. That player is none other than RB/RB Merril Hoge who has since had his fair share of backlash for the comments he has made against LB Devin Bush as well as the rest of the Steelers’ linebacker core. Since his playing career, Hoge has been an analyst for ESPN and has done work with the Pittsburgh Steelers in film breakdowns shown on the team’s website.

Listener and emailer John Peterson asked Dave an Alex for a Merril Hoge post to reflect who he was as a player, providing some background for the younger generation of Steelers fans that may just see him as some grumpy analyst ripping current players. Seeing that I wasn’t alive when Hoge played in Pittsburgh, I can say the only knowledge I have on him the player is what my father has told me in summary as well as the occasional clip thrown up here on the Twitter machine.

Don’t worry, John, I have heard your request and am happy to oblige. That way, guys like Dave and you can reflect on his playing career and guys like me can be more informed on who exactly Merril Hoge was as a player.

In his second year, and first year as a starter in 1998, Hoge passed Frenchy Fuqua’s 49 receptions from 1971 to become first Steelers RB/FB to make 50 catches in one season. Najee Harris has since then shattered that record, catching 74 passes last season, but Hoge cracking 50 catches back in the late 80s for a tailback is fairly impressive.

Hoge was a throwback runner, having a physical running style where he wanted to go through you and lower the shoulder with his 6’2″, 225 lb. frame according to Pro Football Reference’s page. Unfortunately, his play style ultimately impacted the longevity of his playing career, as he is said to have suffered 12 concussions dating back to high school. His final one came with the Chicago Bears in 1994, his only season not in a Steelers uniform, on a blocking play. That collision ended Hoge’s playing career. Still, Steelers fans will appreciate the tenacity and reckless abandonment that he played with during his eight-year NFL career.

While a physical runner, Hoge also displayed some grace and nifty footwork as a runner between the tackles and in open space at times. He could cut back to daylight and occasionally could jump out of tackle attempts to gain additional yardage.

Hoge’s passing game prowess was really before his time to be honest, being able to run the wheel route up the sideline and play a prominent role in the passing attack for Pittsburgh. Here is one example on the highlight Louis Lipps TD pass to Hoge against the Eagles.

In summary, I have learned more about Merril Hoge the player as well as the person after diving more into his background and watching some of his tape. I can say I can appreciate his contributions to the Steelers franchise during the lean years in-between Super Bowl appearances, being one of the key players on the team that gave fans excitement. Regardless of what he says as an analyst and whether or not we agree with his takes, I think we can all appreciate what he represents as a former player for the city of Pittsburgh, emulating that blue-collar, smash-mouth type of football player the city and the fanbase has identified that a “Pittsburgh Steeler” should be.

What are your thoughts on Merril Hoge the football player? Do you think he represented the city of Pittsburgh well during his time with the team? Does what Hoge say as an analyst tarnish what he accomplished on the football field? Please leave your thoughts in the comments section below and thanks again for reading!