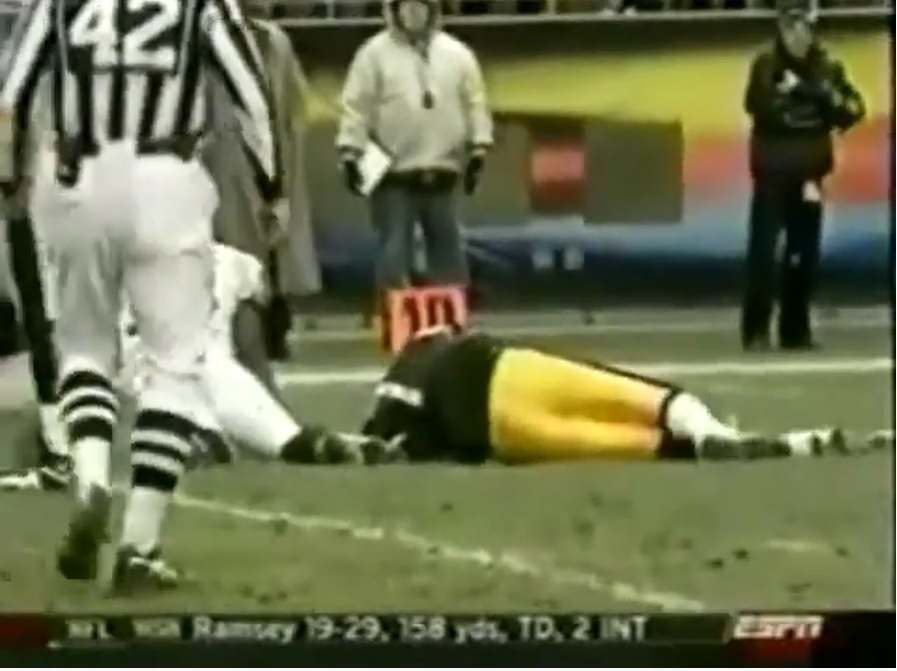 Pittsburgh. Baltimore. A legendary rivalry, the best of this century.

Within that, Ben Roethlisberger versus Terrell Suggs was the ultimate matchup. A rivalry built on mutual respect but sometimes, mutually assured destruction.

Ben Roethlisberger’s first career start against the Baltimore Ravens though his second encounter against the team, seeing his first NFL action subbing in for an injured Tommy Maddox against the Ravens Week 2. Pittsburgh came into the rematch 13-1, on a historic tear with a rookie at quarterback, with their only loss coming to the Ravens. Baltimore wanted to beat them a second time.

It’s the middle of the third quarter. Pittsburgh’s up 10-7 facing third and goal on the Ravens’ two. Playaction to Jerome Bettis with Roethlisberger rolling to his left and floating a touchdown to tight end Jerame Tuman. Crowd goes wild, everyone’s celebrating. Except Roethlisberger who is still on the ground. Terrell Suggs comes flying off the edge untouched, it’s how the play had to be designed, and crushes Roethlisberger into the ground.

Even back in 2004’s older-school rules, the refs flagged Suggs for a “body weight” call, driving Roethlisberger into the ground. Roethlisberger’s ribs were badly bruised. Take a look at the moment courtesy of NFL Primetime’s recap.

In one of his earliest displays of toughness fans would come to expect, Roethlisberger entered the game on the next drive. He completed two passes, a shot downfield to Plaxico Burress but was in visible discomfort after the play, nearly walking off the field. Pittsburgh called another pass, a rare screen left side to Bettis and though he wasn’t touched, Roethlisberger came off the field. Tommy Maddox, helmet already in hand, replaced him, throwing incomplete on third down and setting up a Jeff Reed 40-yard field goal.

Pittsburgh would have just one more drive and closed things out on the ground with Maddox handing the ball off to Bettis and Verron Haynes. Bettis converted on 4th and 1 to seal victory.

After the game, Bill Cowher confirmed Roethlisberger “grimaced” every time he threw the ball, leading the Steelers to take him out. A veteran Jerome Bettis saw what Steelers’ fans would all see in their quarterback.

“Ben’s a tough guy, and I’m not worried at all about Ben,” Bettis told the AP. “He wanted to keep going. He’s a competitor.”

Roethlisberger did not play in the season finale, a meaningless game the Steelers still won – except for Willie Parker, who used it to start his career – but returned for the team’s postseason run, one that ended in bitter defeat at the hands of Rodney Harrison and the New England Patriots.

Suggs was his classic self after the game. Per the PPG, he had little to say about the incident.

“Asked if he was surprised to draw a penalty for his hit on Roethlisberger, Suggs grunted only a monosyllabic “yeah” before heading for the bus.”

Prior to the game, Suggs called Baltimore Pittsburgh’s “kryptonite” for being the only team to knock off the Steelers all year. Baltimore won the battle, injuring two quarterbacks in two games, but Pittsburgh won the war, finishing the year 15-1 and easily winning the AFC North. But in this game, the Steelers/Ravens rivalry was truly born and would become football’s best for the next decade. It’s still one of the game’s most marquee matchups though its lost a bit of its shine of the old Ed Reed/Ray Lewis, Hines Ward/Troy Polamalu days.

The Roethlisberger/Suggs chapter has also officially closed. Suggs has been out of the league since 2020 and Roethlisberger hung up his cleats this winter. I don’t know if the two liked each other but they respected one another, getting the best of the other and being bested over a 15-year span. This moment, like most of their encounters, started with a bang.