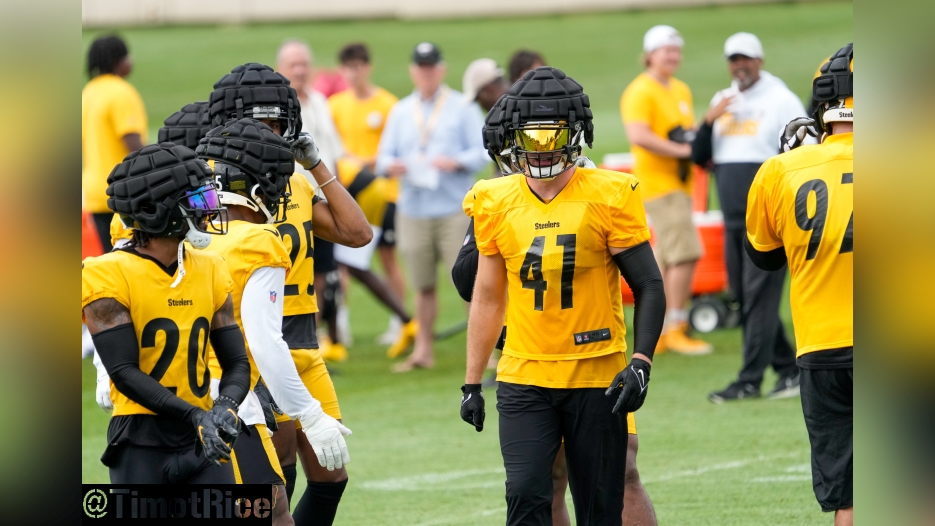 The theme of the first four days of the Pittsburgh Steelers’ 2022 season has been defense, as we wrote about after day two. The last two practices certainly haven’t changed things. But more specifically, the play of the Steelers’ linebackers has been especially impressive. Judging run sessions is hard to do until tomorrow when the pads come on and running the ball is more than a game of just two-hand touch, but in the pass game, they’ve been making plays.

Through four days, the Steelers’ defense has recorded five interceptions. Three of them have been by linebackers: Devin Bush, Robert Spillane, and T.J. Watt. Spillane and Watt’s plays were especially impressive, and Bush’s was opportunistic on a ball knocked out of Zach Gentry’s body on day two. Spillane has shown his IQ and technique in coverage, driving on the ball with authority and roaming underneath in zone coverage, picking off Mitch Trubisky, who forced a ball down the middle on Thursday.

Watt, of course, is Watt. He’s been a wrecking ball on a daily basis, especially the first and fourth days. He turned volleyball player at the next Saturday, batting down a pass and picking off an attempted WR bubble screen to George Pickens. Pass rushers in these settings don’t always get to show their best given the structure of camp. Quarterbacks are off-limits and that changes the mindset of someone off the edge, knowing they can’t go all-out and risk hitting the quarterback or even push a lineman into his quarterback’s knee. But Watt has found ways to make an impact, very much continuing the ‘T.J. Swatt’ moniker fans have gotten used to. Watt has had at least seven pass deflections in three straight years, making he and Shaquille Leonard the only linebackers to do so since 2019.

But it goes beyond the big, obvious plays. Myles Jack has been sticky in coverage, blanketing Zach Gentry rep after rep. Even Gentry’s great 20-yard catch earlier in camp was well-defended by Jack, requiring a perfect throw. As we wrote about earlier this offseason, Jack is set to be the Steelers’ best cover linebacker since Ryan Shazier, and so far, he’s meeting that expectation. Devin Bush’s play has been harder to read; he did have that interception, but there haven’t been any obvious negatives. Elsewhere, Ulysess Gilbert III has a pass breakup and enjoyed a fine start, while seventh-round rookie Mark Robinson has played well early, even when asked to move backwards. Rookie T.D. Moultry looks explosive off the ball and could make an impact as a pass rusher late in preseason games.

The pads coming on certainly will be the defense’s biggest test. We’re not used to this extended ramp-up period. Normally, four practices means two in pads but the league is lengthening its “acclimation” period, perhaps one reason why the Steelers have 18 camp practices, a fairly high number. But four sessions in, it’s been an encouraging group of guys.