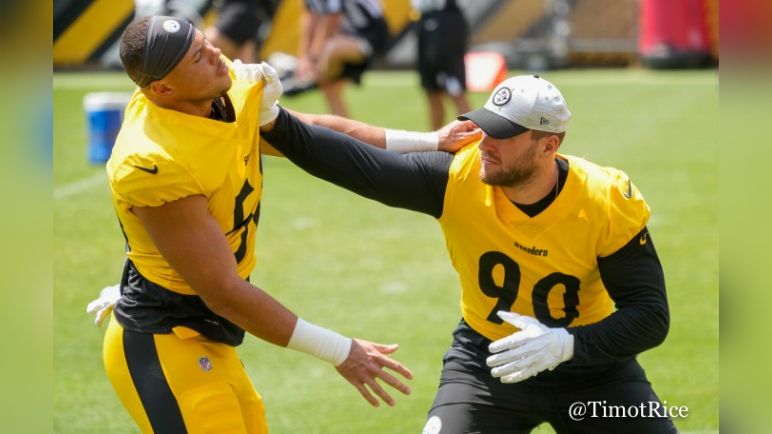 The front seven of the Steelers’ defense has for some time annually been ranked near the top of the league, or if not, not far behind. However, last year the unit was dealt several devastating blows, including a season-ending ankle injury to nose tackle Tyson Alualu but also a knee injury to Stephon Tuitt, coupled with the death of his younger brother. The team was forced to play rookies and street free agents in their place, and the result was a run defense that plummeted to the bottom of the league. The Vikings game in December epitomizes the season’s run defense in a nutshell as Pro Bowl running back Dalvin Cook ran roughshod over the defense to the tune of 205 yards, frequently ripping off chunk gains deep into the secondary.

Thus the reason the website Sharp Football Analysis has the team’s front seven ranked seventh in their recently-released rankings, and matter of fact, based off last year’s numbers it seems a bit generous. They have them coming in behind the likes of the Rams, Bucs and Eagles, among others.

“T.J. Watt alone is reason to rank the Steelers’ front seven near the top of the league. However, it’s worth noting just how much the team relies on Watt. When he was on the field, Pittsburgh allowed 5.2 yards per play and 6.2 yards per play without him. If this unit underperforms, a lack of depth will be the reason.”

What was a sore spot last year the front office paid extra attention to this offseason, drafting DeMarvin Leal, once regarded as a first-round pick, out of Texas A&M in the third round. They also recently acquired the services of Larry Ogunjobi, another defensive tackle who’s coming off a career year with the division-rival Bengals, posting seven sacks and a team-leading 12 tackles for loss. Isaiahh Loudermilk received the baptism-by-fire treatment last year in his rookie year, and the game experience will be invaluable this year as he’s reportedly gained some solid muscle and will be a vital depth piece. So too will be nose tackle Montravius Adams, whom the team claimed off the Saints’ practice squad last November and turned out to be a nice addition. So nice, in fact that the team re-upped him this past offseason on a fresh new two-year deal, and he should still remain heavily involved in certain personnel packages, even with the return of Alualu.

In the team’s defense, one of the responsibilities of the linemen is to occupy blocks so the linebackers can flow freely and rack up tackles. This wasn’t the case last year, as the inside linebackers frequently got swallowed up as the opposing offensive linemen reached the second level. The play of Devin Bush, who the team traded up to get in the 2019 draft, has left plenty more to be desired, as he often looked lost on the field last season. Also missing was his explosive first step, as he looked far too tentative. Hopefully this was just mental, as he was fresh off an ACL injury he sustained the prior season. His rookie season he looked like the playmaker the team had hoped to be getting when they made the draft day trade, so if he can get back to form, this will help the defense ten-fold.

The team also upgraded the other inside linebacker spot, vacated by cap-casualty Joe Schobert, whose play was subpar all of last season. The team was diligent in free agency, signing Myles Jack, a tackling machine also by way of Jacksonville who’s still just 26 years old. Jack flourished his first few seasons with the Jaguars, flanked by star talent everywhere including Calais Campbell, Yannick Ngakoue, Telvin Smith and Jalen Ramsey. As the stars left town, more attention was paid to Jack and his play seemed to suffer. A fresh start in the Steel City will do him well, surrounded by All-Pro talents at every level of the defense.

On paper, the front seven looks to be a super-talented group, led up-front by arguably the top defensive tackle in the game not named Aaron Donald in Cam Heyward. Watt is the straw that stirs the drink in the pass rush, as evidenced by the 22.5 sacks he piled up last season, tying Michael Strahan’s single-season record and winning the DPOY Award in the process. His bookend running mate on the other side, Alex Highsmith, will look to make another jump in production in his third season, as he recently stated 10-12 sacks is the goal. Odds are the team is in prime position to lead the league in sacks for a sixth-consecutive season, and it’s a testament to the strength of the front seven.

Do you agree or disagree with the rankings by Sharp Football Analysis? Let me know your thoughts in the comments below.