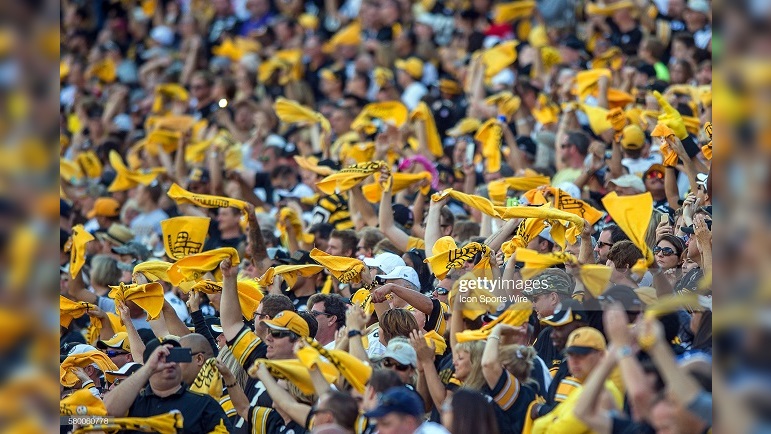 While Pittsburgh Steelers’ fans aren’t particularly thrilled with the latest news of a stadium name change from Heinz to Acrisure, Steelers’ Nation overall is a very happy bunch. That’s according to a study conducted by the website Online Betting Guide, who ranked Steelers’ fans as third-happiest in the NFL.

They created a “Fan Happiness Score” by using social media as their guy. They viewed the number of followers and likes on Instagram and Twitter combined with Facebook “love to angry” reaction icons to come up with a final number. Pittsburgh finished with a 6.92 overall score, good enough for third place. Here’s the top five.

Interesting to see the Steelers tied with the Ravens for third place. The AFC North was well-represented with those two teams in the top five and Cincinnati at #10. New Orleans claims the top spot with New England in second place.

Unfortunately, the website only shows the top ten scores. It’d be far more fun to see who finished last. Jaguars’ fans? Commanders’ fans? Lions’ fans? All strong contenders to be most miserable.

While semi-interesting data, as least for mid-July content, the methodology seems pretty weak, judging fan happiness off Twitter followers and Facebook reaction scores. But it’s difficult to apply hard, tangible data to “happiness” and the site is making do with what it has.

Steelers’ fans may have a tougher time remaining happy in 2022. The organization is starting over at quarterback with a tough schedule and a terrible new stadium name.

Online Betting also compiled “happiness” data for the other major sports. Memphis Grizzlies fans were far and away the happiest group with a 8.53 score. Chicago Bulls fans were next at 8.10, with the Miami Heat ranking third at 7.92. The Saints were the only NFL squad to crack the top ten, while just one NHL team did too, the Colorado Avalanche at #7. Five NBA organizations made the list, including the Sacramento Kings, who may be more apathetic than actually happy. Again, you can check out the entire published study by clicking the link here.