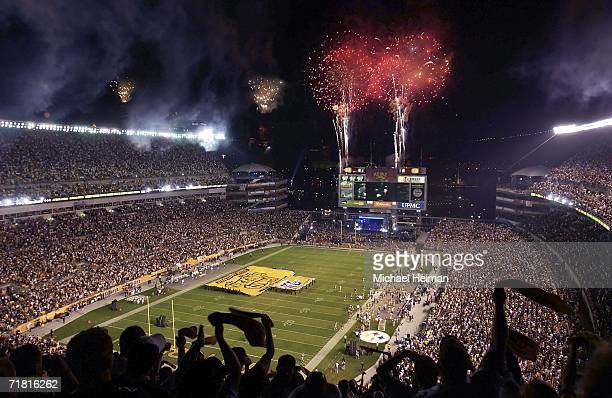 The Pittsburgh Steelers have officially announced the new name of their stadium for 2022 and beyond – Acrisure Stadium. It’s a 15-year partnership, meaning those who dislike the name, which makes up the majority of fans, better get used to it. It’ll be around for awhile.

The Pittsburgh Steelers officially announced today that the new name of their home stadium will be Acrisure Stadium. Financial terms of the 15-year deal for the stadium were not released. #Steelers #NFL pic.twitter.com/4BDyu57fgj

“Acrisure provided us with an opportunity to ensure our stadium continues to be a valuable asset for our fans as well as keeping up with the market value of NFL stadiums,” Steelers’ Team President Art Rooney II said in a press release. ‘We are very appreciative to partner with Greg Williams and his company, and we look forward to a long, beneficial relationship for years to come.”

Acrisure, an insurance brokerage company, also issued a statement regarding the news.

“The Pittsburgh Steelers are an institution in American sports and a globally recognized brand. Partnering with the Steelers is the opportunity of a lifetime and a tremendous honor,” said CEO Greg Williams.

The rights will go into effect for the 2022 season. It replaces the old and original name of Heinz Field. No word on the cost of the deal, but it’s likely to be tens of millions of dollars, if not more. Pittsburgh’s home has been called Heinz Field since the stadium opened in 2001. The Steelers, of course, aren’t changing locations but are changing names, a rarity for the team. Since 1970, they’ve played at Three Rivers, Heinz Field, and now Acrisure Stadium.

As a silver lining, the Kraft Heinz Company hinted they would still have a smaller partnership with the Steelers, tweeting this out a short time ago.

The name may be changing, but this is not goodbye. Pittsburgh will always be home for Heinz! Our partnership continues and we’re excited for the future and looking forward to next season. Until then, share your #HeinzFieldHighlights with us. pic.twitter.com/3Cq8DC2F1L

UPDATE (2:44 PM): The deal is worth at least $10 million per year, according to The Fan’s Andrew Fillipponi, who has been in front of this story from the beginning.

Acrisure will reportedly pay more than $10 million a year for the naming rights to the Steelers stadium, per @ThePoniExpress. #Steelers #NFL

UPDATE (3:27 PM): Kraft Heinz has released a full statement, saying they were outbid by Acrisure with a price bigger than Heinz “could justify.” But they announced they’ll remain a partner with the Steelers, with more details to be released in the coming days.