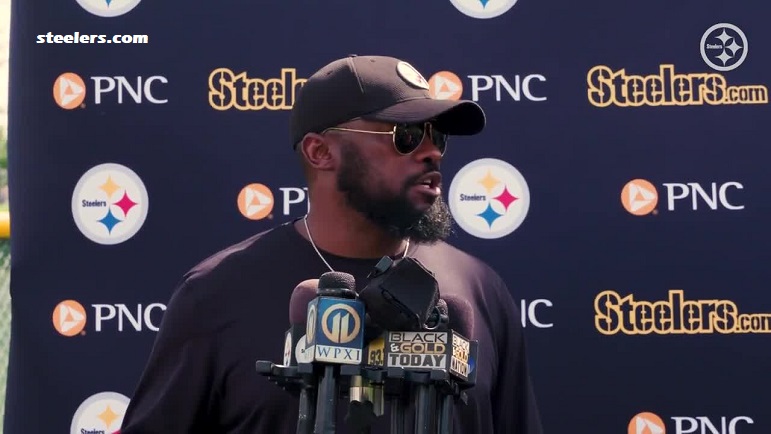 The Pittsburgh Steelers have now wrapped up their second training camp practice of 2022 at Saint Vincent College in Latrobe, and afterwards, head coach Mike Tomlin updated the health of his team coming out of that second session.

“From a health standpoint, not a lot new to talk about,” Tomlin said. [Pat] Freiermuth didn’t finish the last period or two. He experienced some lower body tightness. We’ll exercise that necessary precaution, get him evaluated and not let a small thing become a big thing. Other than that, it’s kind of status quo on some of those guys that we mentioned yesterday, [Miles] Killebrew and so forth.”

We’ll now have to wait and see what this means for tight end Pat Freiermuth (tightness) moving forward into the weekend and if he’ll be able to resume practicing on Friday. As for safety Miles Killebrew (pectoral), he did not practice on Thursday after getting injured on Wednesday. It’s hard to say for sure whether or not outside linebacker T.D. Moultry (cramps) practiced on Thursday. Alex Kozora said he did not see the rookie undrafted free agent in any team sessions, however.

Two other players that sat out Thursday, safety Minkah Fitzpatrick (wrist) and defensive tackle Tyson Alualu (knee) started off training camp on the Active/NFI and Active/PUP lists, respectively. They likely won’t practice for a while. Additionally, wide receiver Diontae Johnson (personal) did not practice during the team portion again on Thursday, and that’s due to his contract situation. He was limited to positional work. Defensive tackle Larry Ogunjobi (foot) was also heled out of the team portion of practice again on Thursday. He is being eased into action still.

The Steelers next training camp practice will take place on Friday at Saint Vincent College.