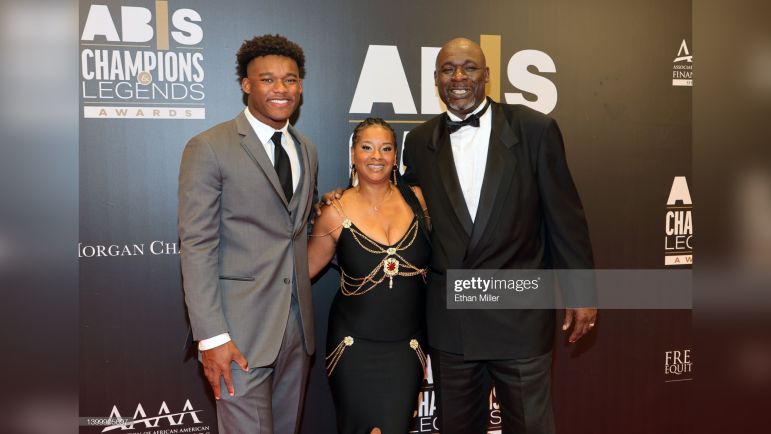 A lot was made about the first couple of rounds of last night’s MLB Draft, and the fact that, for the first time ever, four players were selected in the first round who are second-generation MLB players. The sons of Matt Holliday (Jackson), Andruw Jones (Druw), Carl Crawford (Justin), and Lou Collier (Cam) were all drafted last night.

This is the first time ever that four sons of former major leaguers went in the first round of an MLB draft! pic.twitter.com/XifEBa9XZH

But so, too, was the son of a former first-round NFL player: that of former Pittsburgh Steelers tight end Eric Green. That would be Elijah Green, now 18 years old, who played at IMG Academy. He was drafted fifth overall by the Washington Nationals, though it will likely be a quite before he sees an MLB park. Baseball and football drafts don’t quite work the same way—there is no minor league system.

The Steelers, of course, place a fair amount of value in pedigree and bloodlines. They have four sets of siblings on their 90-man roster right now with T.J. and Derek Watt, Cameron and Connor Heyward, Terrell and Trey Edmunds, and Carlos and Khalil Davis. The Edmundses are also the children of former Pro Bowl tight end Ferrell. There are plenty of other bloodlines, as well. Robert Spillane, for example, is the grandson Johnny Lattner, one of the great ‘what could have been’ stories in Steelers, and NFL, history.

As for the topic at hand, Eric Green offers impressive bloodlines, as well. He not only was a first-round draft pick, he saw NFL success. He made the Pro Bowl himself in 1993 and 1994, and had a 10-year career overall. He recorded 362 career catches for 4,390 yards and 36 touchdowns, and he did that all in the 1990s as a tight end. He scored 13 touchdowns in his first two seasons with the Steelers, and still owns the team record for receiving yards in a single season by a tight end with 942.

Elijah, who has committed to the University of Miami, is 6’3”, 225 pounds, and primarily plays in the outfield, and many believe that he could have declared for the 2021 MLB Draft as a 17-year-old. As it is, he was still selected fifth overall this year. Here’s just a bit of his scouting report from the league website:

“A right-handed hitter, Green is capable of doing just about everything very well…Green is an elite-level runner who can steal bases and cover a ton of ground in the outfield, where he should be able to man center field, with a plus arm, for a very long time to come. His complete toolset doesn’t come around very often”.

NFL scouts said very similar things about Eric Green and his rare natural gifts, which is why he went 21st overall to the Steelers in 1990. A remarkably athletic specimen for a man his size (6’5”, 280 pounds), the Georgia native, a decorated athlete, can now add ‘proud papa of a professional athlete’ to his list of life accomplishments.

Champ your family and friends are extremely proud of you!!! ⁦@elijahgreen1204⁩ Today is YOUR DAY!!! Enjoy and embrace every moment of it!!! God has a plan for your young life son!!! Let him be your guide!!! Love Ya DAD pic.twitter.com/3387loSlmt