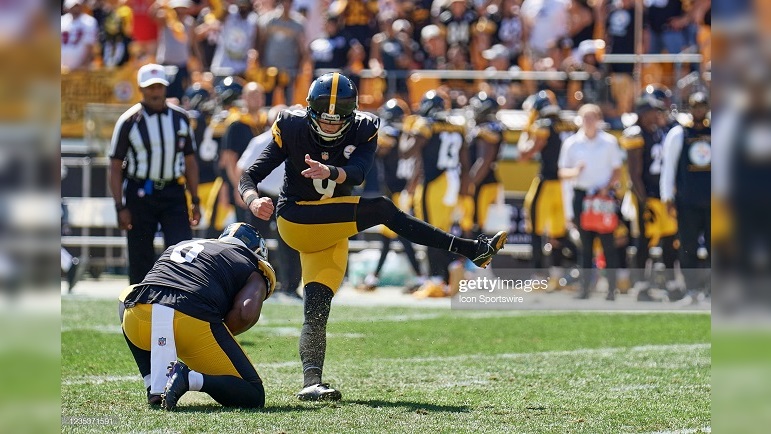 With training camp in full swing in Latrobe at Saint Vincent College, real football has arrived for the Pittsburgh Steelers. What great news that is!

Though real football is back and actual developments on the field in practices must be talked about, I am still trying to wrap up some offseason series here for Steelers Depot, continuing today with my Ranking The Steelers’ Starters series, focusing on No. 6-4 today.

As I dive further and further into this series, I am finding it much, much harder to figure out how to rank the projected starters for the black and gold ahead of the 2022 season. I believe the Steelers got better in the offseason and added a lot of talent. That’s making it challenging to flesh it all out.

Before we dive further into my rankings, I wanted to lay out my projected starters for the season as we draw nearer to Steelers’ Training Camp. Below, I went with 11 personnel and a three-receiver set offensively, while going with the Steelers’ sub-package defense.

If a name is in italics, it means they’ve appeared on the list to day. You’ll see 18 names below already in italics.

If a kicker by the name of Justin Tucker didn’t reside in Baltimore, let alone the NFL, there’s a great chance Chris Boswell would be considered the best placekicker in the NFL, bar none.

Outside of a rough 2018 season that saw him struggle mightily due to injury, Boswell has been one of the most consistent, accurate kickers in the NFL overall, and is coming off of a career year in which he connected on 36-of-40 field goals for the Steelers, drilling a number of game-winning kicks in 2021.

It’s gotten to the point with Boswell that once the Steelers cross over midfield, they are pretty much in Boswell’s range for three points, which became huge for an offense that was dismal in 2021. That could remain the case in 2022, so the Steelers will need to be able to lean on the consistent right leg of Boswell once again.

Here’s hoping he gets the extension he deserves from the Steelers organization.

What a special talent Najee Harris is.

Even in a year in which the Steelers offensive line was downright terrible in front of him, and the offense lacked any sort of creativity or downfield threat overall, Harris turned in a Pro Bowl season, setting the franchise record for rushing yards in a season for a rookie, and churned out 1,667 total yards on the season, scoring 10 touchdowns.

Now, ahead of his second season Harris is poised to become not only the focal point of the Steelers’ offense, but also a team leader overall. He’ll have to carry an even larger workload in 2022 as the Steelers break in a new quarterback and a pair of new offensive linemen. With some improvements around him, and a playbook that’s opened up a bit more, Harris should have an even better season this fall for the black and gold, inserting himself into the discussion for one of the top running backs in football.

While the Steelers’ offense was mostly a disaster in 2021, Diontae Johnson truly ascended into stardom at the wide receiver position.

Already an elite route runner that creates separation with the best of them, Johnson turned in the best season of his career, hauling in 107 passes for 1,161 yards and eight touchdowns, all career highs three years into his career.

Now, entering a year of transition for the Steelers at the quarterback position, Johnson’s importance to the Steelers’ rebuilt offense skyrockets as a true No. 1 option in the passing game. Though he had some struggles with drops down the stretch last year, those issues have been blown out of proportion compared to the amount of targets he received in 2021.

Don’t except those numbers to decline too sharply either. He’ll still be a focal point and will draw a ton of attention from opposing defenses each week, which should open the field up for Chase Claypool, Najee Harris, Pat Freiermuth, George Pickens, and more. He’s a vital piece to the Steelers’ offense — very clearly the top player on the Steelers’ offense in my book. Hopefully the Steelers can work out a long-term deal with #18 and keep him in the Steel City a long time. He’s worth it.