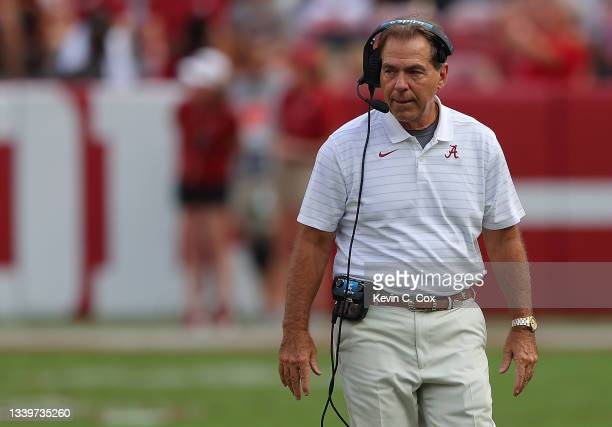 Pittsburgh Steelers RB Najee Harris made a guest appearance Monday morning on All Things Covered podcast with Patrick Peterson & Bryant McFadden and talked with the fellow former Steeler about his recent Madden rating, his playing weight, and even his experience during draft day back at home at a homeless shelter.

When Harris responded to McFadden on how he became the student of the game that he is today, he acknowledged that he sought out the advice and instruction on a regular basis of possibly the best coach to ever do it in college football: Nick Saban.

“You know, I didn’t really have a running back coach until college,” Harris said on the All Things Covered which also aired on the podcast’s YouTube channel. “So, me learning all that stuff with Saban; I used to go to office a lot and tell Saban ‘You know, what’s some things I need to work on’ and he’ll pull up some film and then he’ll break it down to me and all this stuff every year. Every year I’ll go to Saban and be like, ‘What’s some things I need to work on’, causes Saban watches. He watches all tons of film on us.”

While some players hate to be held under a microscope constantly by their coaches, Harris seemed to relish it and used Saban’s relentless film study and evaluation to make him a better football player. Nick Saban has long-often been referred to by many as obsessive with winning and perfection, demanding the absolute best of his players, assistant coaches, and support staff to put their best effort forward to attain said perfection. Many players and opposing coaches have criticized Saban for such methods, but Harris embraced it and adopted that same obsessive nature when it came to film study and preparation.

I don’t care for Alabama nor Nick Saben but this is some great coaching pic.twitter.com/wtUCzhi0wb

In order to be the best, you must be willing to do what greatness requires. That often means extra rehab sessions to get the body right, extra reps after practice on the jugs machine to work on your hand-eye coordination, and extra time in the film room to have a leg up on your competition from a cerebral aspect of the game. Harris learned this quickly during his time with the Crimson Tide and sought out the best mentor he could have in his free time to ensure he was working on his weak points to become the best player he could be.

Seeing as Saban and Bill Belichick coached together in Cleveland back in the early 90s and remain good friends to this day, it’s no wonder why both men are considered the best in their respective levels of football given the amount of work they did together and how they pushed each other to the levels they are at now. Najee Harris offered to be a volunteer rather than a hostage under Saban’s mentorship, molding him into the pro’s pro that now takes the field as a prominent member of the Pittsburgh Steelers.