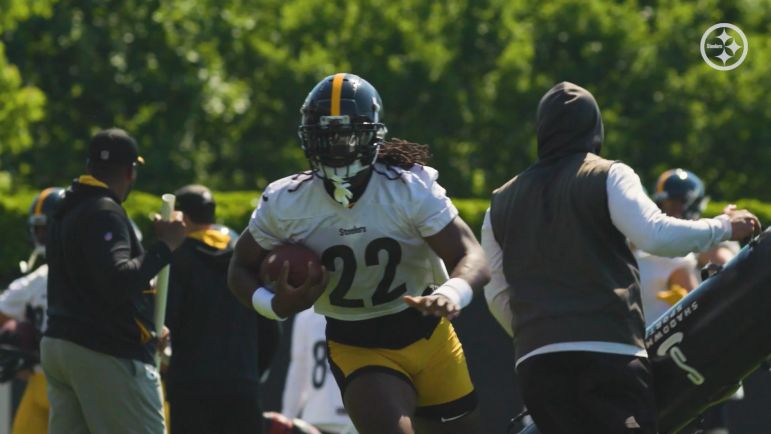 Najee Harris has tied Diontae Johnson’s overall rating in Madden 23. With running back ratings revealed Wednesday, Harris came in at an 85 overall, up from his 76 overall as a rookie. Still, that failed to crack the top ten running backs in football. Instead, he tied for the 15th best overall rating alongside Cordarrelle Patterson.

The best RBs in #Madden23 🏃💨 pic.twitter.com/1W3DXGYlxl

You can check out the complete list of rankings here.

Notable individual ratings of his include 88 speed, 83 strength, 96 carrying, and 88 break tackle, the latter seeming awfully low for a back who broke plenty of tackles as a rookie. We’ll see if Harris has any commentary about his ratings later in the day.

A heavy workload though inefficient season behind a weak Steelers’ offensive line led Harris to finish 2021 with 307 carries for exactly 1200 yards and seven touchdowns.

Other running back rankings include Benny Snell at a 73 overall, Anthony McFarland at 67, and Trey Edmunds at 64. Like in real life, the only back you want to use for the Steelers is Harris.

The rest of the Madden ratings will be released later in the week.

Elsewhere, Chris Boswell is rated 82 overall while Minkah Fitzpatrick is the top-ranked safety on the team at 89 overall. Surprisingly, Fitzpatrick’s rating makes him just the fifth-highest FS in the game behind Kevin Byard, Justin Simmons, Micah Hyde, and Jessie Bates.

Other Steelers’ DB ratings include Terrell Edmunds at 78, Damontae Kazee at 76, Karl Joseph at 74, Miles Killebrew at 67, Tre Norwood at 65, and Donovan Stiner at 62.