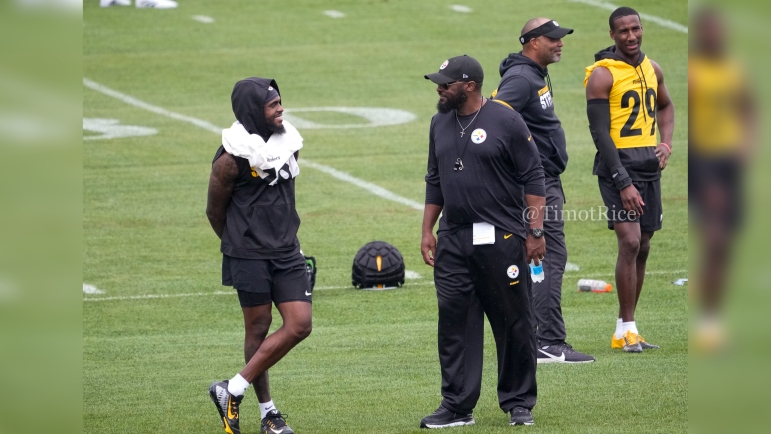 Pittsburgh Steelers wide receiver Diontae Johnson is in training camp. The fourth-year veteran is even doing some on-field work, though there is plenty that he isn’t doing. A Pro Bowl selection as an alternate last season, he believes that he should receive a contract extension before playing out the final year of his rookie contract.

It’s far from clear that the Steelers even have any serious intention of doing that, but Johnson is standing there from the sidelines, both literally and figuratively, watching all of these other wide receivers, including those from his own draft class, making bank, waiting his turn.

And the Steelers continue to wait for him to decide that he is ready to be a full participant in practice. He told reporters on reporting day that if it were solely up to him, he would practice, but it’s a conversation that he’s having on an ongoing basis with his agent when it comes to pushing for a new deal. In the meantime, the team moves on without him in the drills he sits out, and they’re not necessarily waiting on him or staring at the clock, so to speak.

“I’m not making any guesses about participation”, head coach Mike Tomlin said after practice on Saturday when he was asked about any potential timeline for Johnson to be more involved on the field. “I deal in reality and who we have working and what transpired today. We’ll see what happens as we move forward”.

It must be said that there certainly doesn’t appear to be any hostility at all. Johnson will often be found hacking it up with Tomlin at Latrobe, and as said, he still participates in some individual drills and is involved in most every way, much as T.J. Watt was last year during his contract negotiations.

The biggest difference there, of course, is the fact that Watt’s contract extension was inevitable. Johnson even getting a new deal from the Steelers after this season isn’t guaranteed, although truth be told, I really would love to know where they stand internally regarding the future of the wide receiver position.

Is it Johnson that they want to pay, or do they want to see how things play out this year with Chase Claypool and now rookie George Pickens? While there’s no hard-and-fast policy regarding only paying one receiver at a time, it is very difficult to pay two of them near the top of the market—increasingly so indeed, now with essentially 14 of them averaging $20 million per season or more.

Quite a number of them earned top dollar just this offseason, including Tyreek Hill, Davante Adams, Cooper Kupp, A.J. Brown, Terry McLaurin, and most recently, D.K. Metcalf. You’ll notice that a lot of these names will be rather familiar to Johnson, having been drafted in the same class as himself.