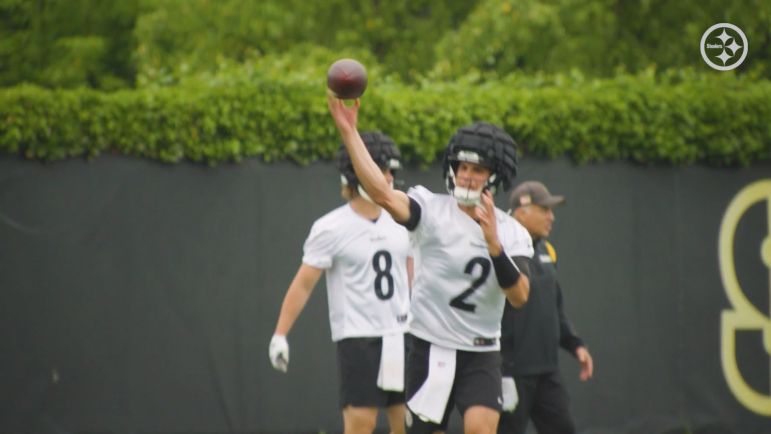 It would be fair to say that Mason Rudolph has never been fully embraced by the fan base of the Pittsburgh Steelers. Drafted in the third round in 2018, he came in with loftier expectations because of former general manager Kevin Colbert’s rare admission that they had a first-round draft grade on him.

After spending his rookie season inactive, he won the backup job in 2019, and then was forced into extensive playing time after Ben Roethlisberger injured his elbow. He had some bright spots, but there’s a reason the team signed a veteran free agent this offseason and then drafted a rookie in the first round after Roethlisberger retired.

Despite the outside view, Rudolph maintains that he believes he is in the competition with Mitch Trubisky and Kenny Pickett for the starting job, saying back in May that that is what he had been told by the higher-ups.

In a training camp preview published today for the Pittsburgh Post-Gazette, Gerry Dulac quotes Rudolph as displaying an appropriate awareness of the perception of his status with the team in 2022, amid speculation that he could be traded, or even cut.

“That’s going to be the narrative heading to camp, but it’s exciting to know you’ve got a good chance to play”, he said about the perception that he is most likely to be the quarterback left out of the mix. “I’m getting a fair shot and I’m excited about that. I’m getting enough reps to prove myself. I think I’ve had a good spring practice”.

What kind of workload will he get in training camp, however, with two quarterbacks who are new to the team, including a rookie, who are competing for a starting job? The Steelers have gotten five years of looks at Rudolph. Trubisky and Pickett are the unknowns, and one way or another, they have to see what they have.

The thing is, if the Steelers feel like they ‘know what they have’ with Rudolph, then that probably doesn’t speak well of how they view his chances of being their starter. Sure, Colbert and company would pay lip service to the idea back in February and March that they would theoretically be comfortable with him starting this season if necessary, but actions speak louder than words, and, well, just look at the quarterback room now.

But the same applies to Rudolph himself. Actions speak louder than words. And training camp is the time to act. If he’s going to be the starter, he can earn the job on Chuck Noll Field and inside of preseason stadiums.

He knows the narrative, as he said. But nobody knows yet how the story ends, because it’s still being written by the characters involved. Rudolph steps into Saint Vincent College with the right mindset. Can he capitalize on it?