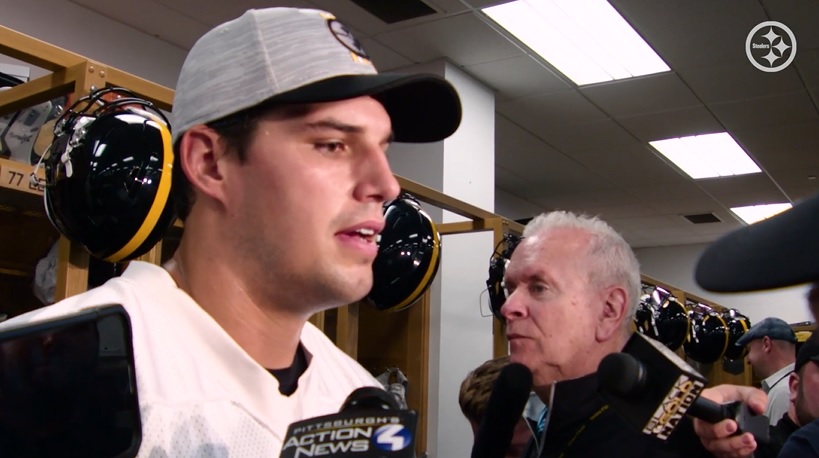 Does Mason Rudolph care if you leave his name out of the Pittsburgh Steelers’ quarterback competition? Probably not—as long as the coaching staff and front office aren’t doing the same. The fifth-year veteran is approaching this year, following the retirement of Ben Roethlisberger, as his opportunity to finally emerge as a starting quarterback in the NFL. And he believes his chance is legitimate this year.

“I can’t control what goes on on the second floor, but I’ve been told that”, he told reporters yesterday during the first OTA session, via video of his media session on the team’s website, when asked if he believes he has a legitimate shot to compete to be the starter. “I’m excited to do my best to compete to be the guy. So, yes”.

His competition is all new to the team, though not all new to the league. On the first day of free agency, the Steelers signed former first-round pick Mitch Trubisky to a two-year contract. Trubisky has a winning record as a starter with the Chicago Bears over a four-year span, and helped bring them to the playoffs twice.

After signing Trubisky, the Steelers weren’t finished, as they drafted two quarterbacks, including Kenny Pickett in the first round. Pickett is from right next door, literally inside the UPMC Rooney Sports Complex on the Panthers’ side. They wouldn’t have drafted him if he wasn’t going to start at some point, but it doesn’t have to be now.

This is Rudolph’s opportunity, one way or another, to show out, to carve out his future. Even if Pickett is the future in Pittsburgh, if he can win the starting job for 2022 and put out good tape, he can potentially find another opportunity to start—or at least to compete to start—in another city as an unrestricted free agent in 2023. It’s all got him “excited”, as he said, to finally enter an offseason knowing there’s a real chance.

“The last four years, you knew there was a Hall-of-Fame quarterback in front of you, and you’re developing, getting better at your position and doing everything you can to be ready in case your number was called”, he said. “Obviously, it’s a little bit more realistic this year that it will be called. Just, the added excitement”.

The Steelers had a first-round draft grade on Rudolph when he came out of Oklahoma State in 2018. He lasted until the third round as they addressed other needs—safety, and then wide receiver, as it happened—but when he was still on the board in the third round, they traded up to get him.

Pittsburgh wasn’t looking for a quarterback at that time, with Roethlisberger still healthy and still playing at a high level. They knew the end could be around the corner, but they weren’t going to rush to find his successor and pay top dollar to do it. Could he finally be Roethlisberger’s successor, five years later?