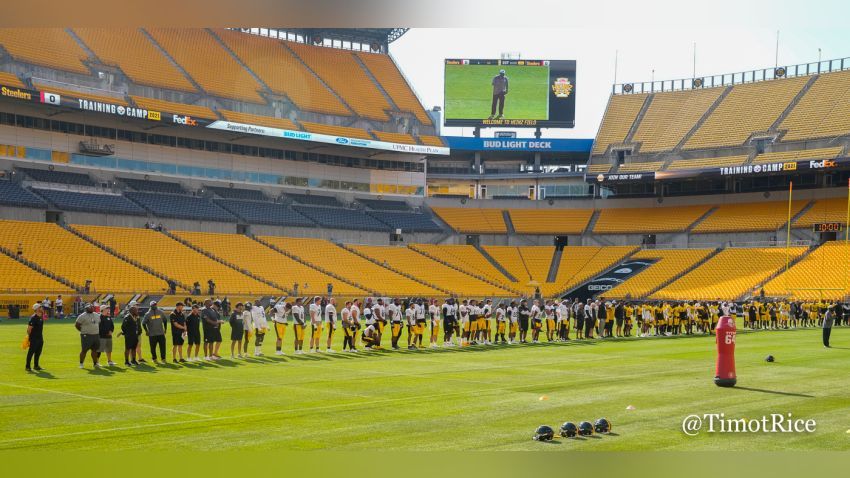 My Pittsburgh Steelers’ 2022 roster prediction kicks off the first day of training camp with the team reporting to St. Vincent College. Tomorrow will mark the team’s first practice of the summer, meaning football is all the way back.

With that, I’m offering my best guess as to what the 53-man roster and 16-man practice squad will look like when the team travels to Cincinnati Week One. This will of course change throughout the summer and I’ll offer a new prediction following each of the team’s three preseason games.

Analysis: No changes here. It’s more a question of how the depth chart will look than who they keep. Mason Rudolph could be traded but he probably has less value than people think. Pittsburgh wouldn’t mind keeping an established veteran in that room either. Gut says he stays.

Analysis: One change here by putting McFarland back on the roster. This is certainly last chance for him but he’s healthy, there’s obviously at least one spot open, and Matt Canada will get the most out of him as he started to do last summer before McFarland got hurt. Of course, this team could easily look outside the organization if none of the in-house options step up.

Analysis: Heyward will bounce around as a H-Back and tight end so you can call him whatever you want. He’s versatile and athletic enough to make the team. Given the lack of TE depth behind the top two, there is room for both Watt and Heyward. For now, anyway.

Analysis: Is tight end the Steelers strongest position group? Receiver has the potential to beat it but George Pickens and Calvin Austin III are still NFL unknowns. Freiermuth enters camp as the clear starter with Gentry rounding into form as a solid blocking option. Kevin Rader will push for a spot while Jace Sternberger’s pedigree is interesting but he’s had zero NFL success.

Analysis: Pretty competitive room top to bottom. Don’t count Anthony Miller out of this group either. But the top four plus Olszewski seem like locks/good bets to make the squad. Boykin has the size, athleticism, and special teams value Mike Tomlin loves and has the inside track on the #6 job. It may depend a bit on how the slot battle looks and if someone like Austin can establish himself early. If not, Miller may be worth the extra look.

Analysis: Chalk group here. You may not love what the Steelers have done at tackle, which is to say, not much, but these are their top three. Haeg serves as the veteran swingman. Hope the top two stay healthy.

Analysis: I’ll stick my neck out with UDFA Owens making the team. Versatility could make him a similar story as last year with John Leglue and there is a 9th offensive line spot up for grabs. Dotson should be the starting LG with Daniels opposite. Green will try to push Dotson but is far more likely to be the backup.

Analysis: Cole seems to be the top center heading into camp with Hassenauer the #2. It’s not great but it’s better compared to a season ago. Cole will bring more stability.

Analysis: Have the team keeping seven defensive linemen. A rare move but Kevin Colbert’s not running the show anymore and the Steelers have seven qualified names. That’s really all that matters, though injury can change the outlook. Leal really needs a redshirt year so being extra heavy here is wise. Loudermilk should look better in Year Two while Ogunjobi, so long as he’s healthy, will have an immediate impact. Will be interesting to see how the roles are divided up.

Analysis: Unless Alualu just doesn’t have it anymore, hard to see either of these guys being cut. Alualu’s absence was a big reason for why the Steelers’ run defense tanked and Adams was the man who finally offered some production there. If he’s cut, I have no clue who the backup NT (Ogunjobi?) is and Pittsburgh doesn’t want to be in the same spot as they were last season. Both deserve a place on the roster.

Analysis: Pittsburgh’s fired plenty of EDGE depth at the wall. I’m not sure what will stick. Avery seems as good a bet as any to be the #3 and rotate with Watt and Highsmith. A worse version of Melvin Ingram but probably more accepting of his role. Tuszka’s late-season 2021 surge and solid special teams capability give him the nod over Tuzar Skipper, who the team was hesitant to use there during his first trek with the team.

Analysis: No changes here. The ILB battle #3-5 will be one of the tightest of the year even if it is far from the Steelers’ most meaningful competition. Buddy Johnson being left off the list will ruffle some feathers. He’s the most “bubble” player of the 90. But without much of a NFL resume, I’m leaving him off until his play proves he belongs on the 53. All the others here have earned their keep.

Analysis: Some changes here. Adding James Pierre to this list. He may be the best backup outside CB option. Without him, depth in that area is a bit weak but Pierre needs a good camp to stick. Layne stays as a quality specialist. I’m not as high on Damontae Kazee as others while Arthur Maulet may get squeezed out. Sutton, Witherspoon, and Wallace will be the three on the field in nickel. Not entirely sure where they’ll all line up but those are your three. So where does that leave Maulet?

Analysis: Only nine DBs kept to bring on the seventh defensive lineman. Norwood will function as a backup slot corner/dime defender and backup FS behind Fitzpatrick. Killebrew the backup to Edmunds and one of the team’s top special teamers.

Analysis: Just a matter of when Boswell gets his new deal. I think it’ll be sooner than later, as early as today.

Analysis: Harvin is battling himself and free agency more than he is backup Cameron Nizialek. Harvin will need to prove consistency in order to stick. Right now, he’s the favorite but a bad summer can change that in a hurry.

Analysis: Unless he bombs this summer, he’ll remain the team’s snapper.

Analysis: It’ll be a 16-man practice squad this year: eight on offense, eight on defense. Durant and Warren bring different aspects to the table and a RB room that runs hot with competition is a good thing. Jace Sternberger is a name to watch but will have to have a good camp to stick. White is versatile and plays well on special teams while Miller is a slot option. Leglue is the interior guy, Scott the tackle with ties to new o-line coach Pat Meyer.

Costin is newly signed but has NFL experience while Davis can play in the middle. Johnson will battle T.D. Moultry while Skipper could be kept there as an experienced option if there are injuries in front. Putting rookie Robinson and Johnson on the practice squad. Platel is a Maulet-like slot option while Stiner is one of my favorite sleepers in camp.