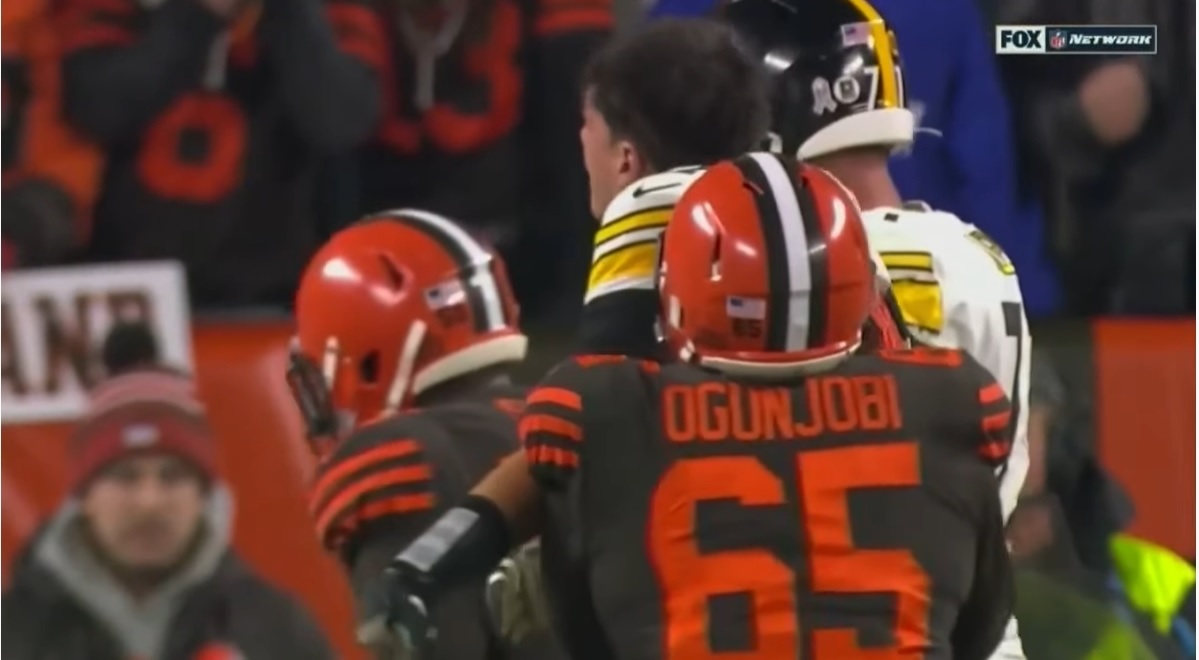 At this point in the rivalry between the Pittsburgh Steelers and the Cleveland Browns, the ugly melee on Nov. 14, 2019 in Cleveland is an infamous one overall.

That night, as we all know, Browns’ star Myles Garrett ripped off Steelers’ quarterback Mason Rudolph’s helmet and hit him over the head with it, setting off an all-out brawl on Thursday Night Football at FirstEnergy Stadium. Shortly thereafter, Ogunjobi came racing in from behind and knocked Rudolph to the turf as Garrett found himself beneath a dogpile from Steelers’ center Maurkice Pouncey, guard David DeCastro and guard Matt Feiler, who raced to the aid of their quarterback.

Four seasons removed from that incident, it’s all water under the bridge for the two parties involved. Arriving at Saint Vincent College in Latrobe Tuesday for his first training camp with the Steelers, Ogunjobi again addressed the incident, this time with Steelers’ media, stating that the two have talked and squashed any issues from that incident all these years later.

Here’s what he said via the Pittsburgh Post-Gazette’s Gerry Dulac.

Former Browns DT Larry Ogunjobi said he's talked to Mason Rudolph about the Myles Garrett incident. “He reached out when I signed. I feel like it’s water under the bridge. That was years ago. I don’t have any hard feelings. I don’t think he has any hard feelings."

“He reached out when I had signed. I feel like it’s just water under the bridge. That was years ago. I don’t have any hard feelings,” Ogunjobi said to reporters Tuesday, according to Dulac. “I don’t think he has any hard feelings.”

Safe to say everyone's mind is made up on who's telling the truth, Garrett or Rudolph, and no one will *know* what happened. But worth pointing out Rudolph said to Ogunjobi "you bitch" after getting blindsided. If he was hurling racial slurs, probably would've used one there. pic.twitter.com/j4iHJyONLk

Clearly, the Steelers have moved on from the incident overall, considering Ogunjobi was signed this summer to replace the retired Stephon Tuitt. If there was still bad blood from either side, the two wouldn’t have come together on a contract agreement as quickly as they did.

It was certainly an ugly night overall for the Steelers and Browns’ rivalry, as well as the NFL in general. But all parties have seemingly moved on and know that things happen in the heat of the moment. Ogunjobi’s comments on Tuesday don’t come as a surprise at all though, considering he stated shortly after signing with the Steelers in late June that Rudolph was one of the first Steelers to reach out to him to welcome him to the team after the signing, along with guys like Cam Heyward, T.J. Watt, Alex Highsmith, Karl Joseph and Genard Avery, who welcomed the defensive tackle to the Steel City.

Now that the local media has talked to Ogunjobi regarding the melee and the Rudolph involvement from four seasons ago, hopefully the incident truly becomes water under the bridge and everyone can move on and stop talking about it.