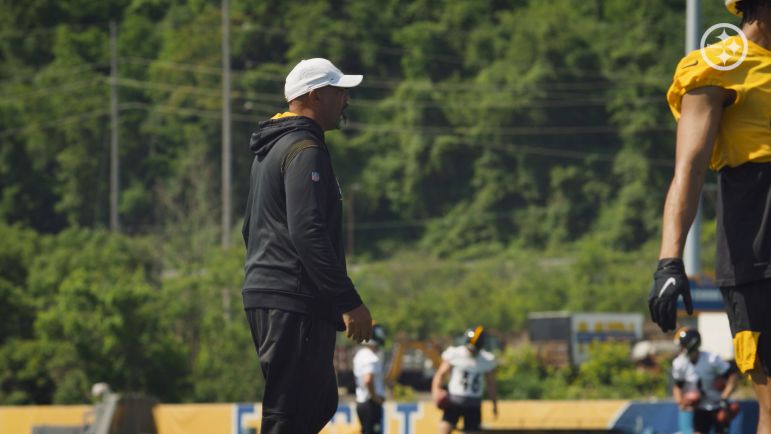 After registering 74 total tackles, 15 for a loss, six sacks, a forced a fumble and 15 quarterback hits during the 2021 regular season, Pittsburgh Steelers outside linebacker Alex Highsmith is hoping to top those stats in 2022, his third NFL season. This season, however, Highsmith will look to make another jump in his progress under a new defensive coordinator in Teryl Austin, who succeeds the retiring Keith Butler. On Monday, Highsmith was a guest on ‘Movin’ the Chains’ on SiriusXM NFL Radio and the Charlotte product was asked to comment on Austin’s promotion and if he thinks they’ll be any noticeable changes in the Steelers defensive scheme in 2022.

“We’re gonna see,” Highsmith said. “I’m so excited to have TA [Teryl Austin] as our defensive coordinator. Just like you said, he’s been here in the system for a while and so he knows what he’s doing. He’s been a d-coordinator at other teams in the league and so I’m just really excited to have him as our defensive coordinator. And just throughout OTAs and throughout minicamp, he definitely brought a fire to our defense. And so, I’m just excited just to continue to work with him and just the rest of the defensive staff as well coming up this upcoming year.”

Austin’s promotion to defensive coordinator has a lot of people excited as the 2022 season draws nearer and it’s obvious that Highsmith is one of them. It’s not like Austin is new to Pittsburgh, however, as he was previously the Steelers senior defensive assistant and secondary coach the last three seasons. In short, he knows the strengths and weaknesses of most of the veteran defensive players currently under contract with the team.

As the Steelers new defensive coordinator in 2022, Austin is sure to add a few new wrinkles to the defense and hopefully that will play in Highsmith’s favor as well. Additionally, the Steelers defensive front should be better than the 2021 unit and mainly due to several players returning to full health and the addition of two more players during the offseason in defensive lineman Larry Ogunjobi and inside linebacker Myles Jack.

Highsmith, who showed some improvement in his play against the run and more power as a pass rusher as well in 2021, figures to have plenty of opportunities in 2022 to win several one-on-one matchups with opposing tackles. In short, there’s plenty of reasons why Highsmith is excited about the upcoming 2022 season with just two weeks remaining before the team reports to training camp.

“We’ve got a lot of guys coming back,” Highsmith said on Monday. “Just know if we stay healthy this year, we’re gonna be a problem. So, I know it’s gonna be a, a really good year for us.”