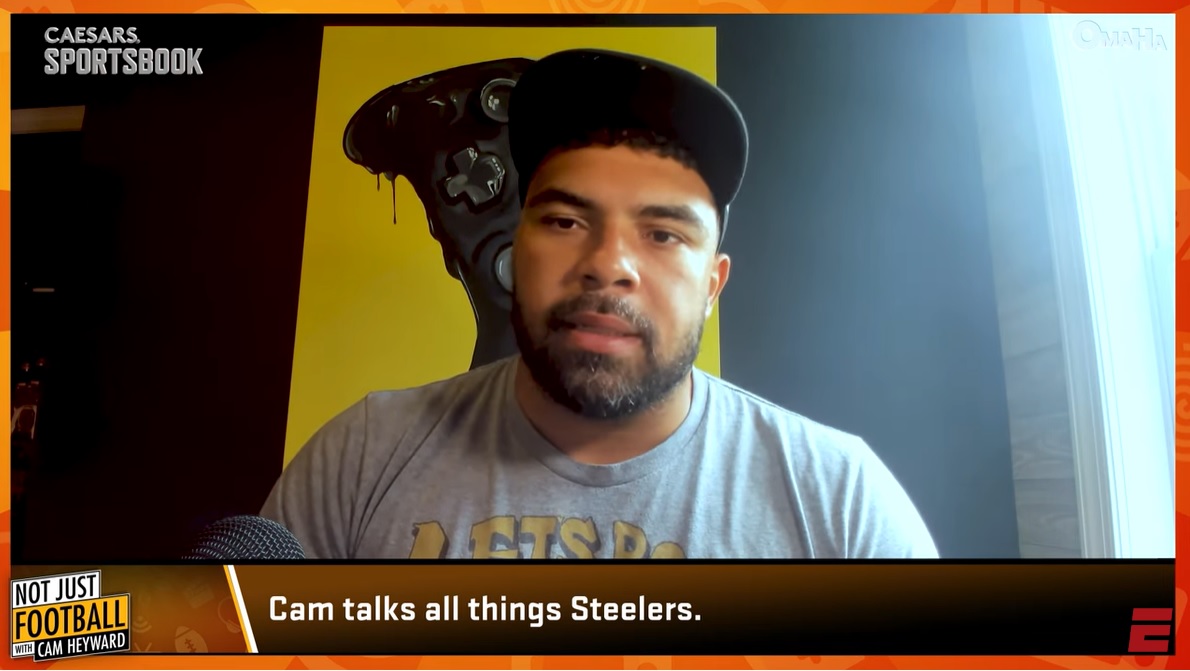 Cam Heyward’s officially taken to the airwaves with the debut of his new podcast, Not Just Football, debuting on ESPN’s platform yesterday. Heyward talked about the state of the new media and the college football landscape but also offered his commentary on the Steelers’ quarterback situation, the first true battle in over two decades. The battle will center around Mitch Trubisky versus Kenny Pickett with Heyward seeing Trubisky having an early leg up.

“I think it starts with Mitch. Mitch, we brought him in in free agency,” Heyward said on his show. “The thing we have to remember about Mitch is he’s coming from a situation where in Chicago they didn’t really give him anything. And he still made it to the playoffs…everyone likes to say ‘Mitch did this wrong, Mitch did that wrong.’ Man, Mitch did a lot of things right. Hopefully we have a better team around him. And we’re going to support him. Right now, he’s our #1.”

Trubisky was one of the league’s first free agency signings and how Pittsburgh kicked off a busy free agency, inking a two-year, incentive-laden deal. That was before Pickett became a Steeler but Trubisky ran as the team’s starter throughout the spring, making it safe to assume he’ll begin camp as the #1 too.

As Heyward points out, Trubisky didn’t have the benefit of a great supporting cast. In 2017, his rookie year, his top receivers were Kendall Wright and Josh Bellamy. Not exactly All-Pro caliber guys. Chicago did give him one weapon in Allen Robinson, and in his first year with the team, 2018, Trubisky led the Bears to the playoffs and made the Pro Bowl. Things backslid from there under Matt Nagy, who looked in over his head and was fired last year.

Trubisky spent 2021 in Buffalo as Josh Allen’s backup before signing with Pittsburgh. The Steelers certainly will offer more stability and arguably a stronger supporting cast, though the performance of their offensive line will be critical to Trubisky’s and the offense’s success. Heyward made a similar comment, pointing to the strength of the Steelers’ backfield with Najee Harris and a potentially deep receiver group consisting of Diontae Johnson, Chase Claypool, Pat Freiermuth, and rookie wideouts George Pickens and Calvin Austin III.

While Trubisky is the favorite, Heyward warned the battle is far from over.

“We don’t know what it’s going to be by the time the season kicks off. There’s a lot of football that’s gotta take place. All we’re doing in OTAs is running around in shorts. I’m excited to put on the pads and see how these guys deal with pressure in their face.”

Given his rookie status and Steelers’ “earn it” mentality, it wasn’t a shock to hear Pickett run as the #3 during OTAs. Spring work isn’t a time for evaluation or decision-making. It’s installing, learning, getting a baseline understanding of how the NFL works. Training camp is when the reps begin to matter from a depth chart and role standpoint and if Pickett shines, he’ll make it a battle. But it’s clear Heyward and likely the rest of the team is entering camp under the assumption Trubisky is the guy. It’ll be his job to lose.