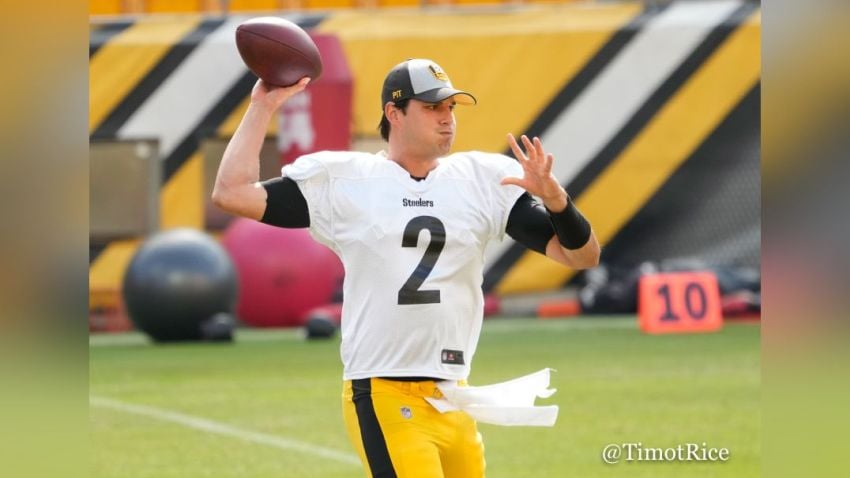 Should The Steelers Explore A Mason Rudolph Trade?

Alex – No, The Steelers Shouldn’t

Mason Rudolph. The Steelers’ Cinderella in the sense of…everyone hates him. There will be no magic ball. No pumpkin that turns into a carriage. No lost glass slipper. The only thing that’s fallen off him is his helmet and Myles Garrett tried to make it fit by bashing him over the head with it. Not exactly his Prince Charming.

That’s all to say – Mason Rudolph is who he is. And that’s not changing. But it doesn’t mean Pittsburgh needs to hurry out and trade him.

Oh how quickly we forget. Travel back to 2019. One day after Week One, Pittsburgh shipped Josh Dobbs – then the #3 behind Ben Roethlisberger and Rudolph – to Jacksonville for a fifth round pick. In the moment, it looked like a solid deal. A week later, Roethlisberger’s done for the year and Rudolph – and eventually a man named Duck – were tasked to try to run the offense. It was offensive, that’s for sure.

Trading Rudolph would run that risk. The team would be left with Mitch Trubisky and Kenny Pickett and if one got hurt, you’d be getting pretty nervous. All that would be left is 7th rounder Chris Oladokun who has talent but is currently the Duck Hodges of the room. I promise Mike Tomlin doesn’t want to even have to think about playing Oladokun this year. Is this living in your fears a little? Perhaps. But it’s just being smart, pragmatic, and careful at the most position in all of sports. It’s a fragile group and you don’t want football karma to strike you down.

2019 was a storm. A hurricane. The type so big and bad they retire the name of. And when they refer to the next great inevitable storm, they say it’s 2019 all-over. Telling a Steelers’ fan that is like telling someone who lives in Moore, Oklahoma it’s May 3rd, 1999 again. Outsiders don’t have a clue what you mean. But to those who know, they know. That’s gonna leave scars and make you act and feel differently the next time around.

Plus, what would be the return? Fans tend to overvalue what their own could get. Quarterbacks hold value more than other spots but Rudolph is a career-backup who will be a free agent after this season. Getting a fifth rounder for him would be nice but isn’t terribly likely. Is it worth to assume the risks of trading him for a late, potentially conditional Day Three pick?

Now, does that mean Pittsburgh shouldn’t trade Rudolph under any circumstances? No. I said the Steelers shouldn’t explore, not that they couldn’t listen. If there’s an offer they can’t refuse, say some desperate team ponies up a fourth round pick, trading Rudolph is worth the risk of 2019 happening all over again. But until that time comes, keep Rudolph, keep your quarterback depth, and give yourself plenty of options during the season.

Jonathan – Yes, The Steelers Should

Come on, guys. This should be an easy one.

You know the saying, “There’s too many cooks in the kitchen”? That is exactly the case with the Pittsburgh Steelers QB room.

They re-signed Mason Rudolph last offseason to guarantee themselves a QB on the roster for 2022 with Ben Roethlisberger expected to retire. Since then, they signed Mitch Trubisky to a two-year deal to compete with Rudolph for the starting job and selected Kenny Pickett in the first round of the 2022 NFL Draft as the hopeful long-term replacement for Ben Roethlisberger. They also spent a seventh-round pick on Chris Oladokun who they liked enough to secure him with a draft pick rather than try and sign him as a UDFA. He is raw but has physical traits that project well to Matt Canada’s offense and can become what Josh Dobbs was as the long-term QB3 on the depth chart.

Saying all of this, what exactly is Rudolph’s role on the team in 2022?

Sure, he is currently QB2 on the depth chart behind Trubisky and ahead of Pickett, but Pickett is a rookie QB getting his first NFL exposure, so it’s understandable why he is running with the third team during spring OTAs and mandatory minicamp. As for Trubisky, he’s coming in after an unceremonious end to his tenure in Chicago and was a backup in Buffalo for one season, but has already surpassed Rudolph on the depth chart who has started ten games for the Steelers and is entering his fifth NFL season with the team. That’s not a great nod of confidence for a player that should have the leg up on the competition given his time and experience in the Steelers offense.

Rudolph has already been disregarded by many as an actual contender for the starting QB job. If he was, why did Pittsburgh elect to sign both a FA QB and draft one in the first round?

This isn’t a slight against Rudolph who has a 5-4-1 record as a starting NFL QB, but rather an acknowledgement that this will be his last season in Pittsburgh.

If this is the case, why not explore a trade to get back something for him?

Pittsburgh managed to steal a fifth rounder for Dobbs just a couple of seasons ago, and they should be able to get no worse than a sixth back in return for Rudolph who is more of an accomplished passer. As Kevin Colbert would say back when he was GM, you must weigh the potential value with draft picks as a sixth rounder could be an Antonio Brown or Brett Keisel if you hit on the pick.

What about if the team experiences a 2019 situation where the starter goes down?

Say Trubisky goes down early in the season like Ben did in 2019. That gives Pickett more opportunity to gain experience on the field much like Ben did in 2004 when he was thrust into action. It also gives Pittsburgh the chance to evaluate their selection rather than ponder if they made the right choice on the most “pro-ready” QB in the draft class. What if Pickett goes down too? Does Pittsburgh really want to throw Oladokun out there? Preferably not, but say they keep Rudolph on the roster as the #3, what are the chances that he propels them on a playoff run?

Not likely, to be honest. And with Cam Newton, A.J. McCarron, and Mike Glennon available on the open market, Pittsburgh could elect to sign one of those guys for the veteran minimum to hold a roster spot with Oladokun rather than hold Rudolph on the roster as the break glass #3 option.

Pittsburgh doesn’t have any compensatory picks coming their way in the 2023 NFL Draft, and with Mason Rudolph surely on the way out after the season, the team would be wise to at least see what they could get in return for him as a one-year rental elsewhere.

Should The Steelers Pay Diontae Johnson?
Will TJ Watt Set The Sack Record In 2022?
Should Derek Watt and Connor Heyward Make The Roster?