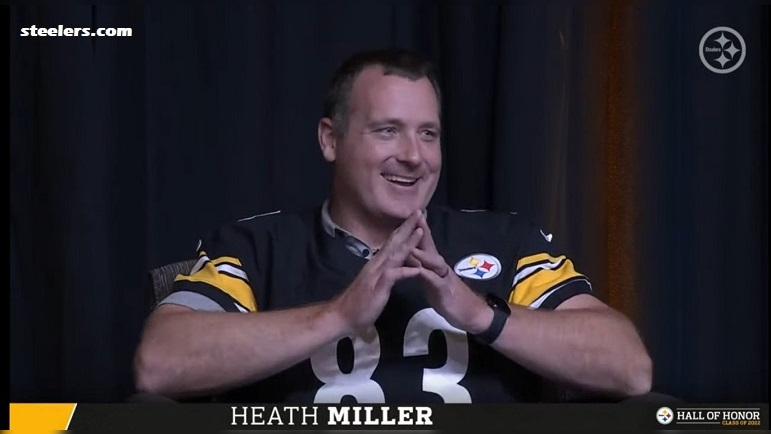 The Pittsburgh Steelers created the Hall of Honor in 2017 to recognize the great accomplishments of former players, coaches, and contributors of the organization since the team was created in 1933. On Saturday, the team added four new members to this prestigious group: RB/WR Ray Mathews, OL Sam Davis, TE Heath Miller, and color commentator Myron Cope.

Miller was on-hand after his induction was announced to provide his instant reaction to being named to that Hall of Honor, expressing his humility and gratefulness to have played for the Black and Gold his entire NFL career.

Heath Miller on Steelers Hall of Honor selection: "It's pretty flattering. I think there's no better fans in the NFL than Steelers Nation. And my goal as a player was to give my very all for our team, but also the city of Pittsburgh." #Steelers #NFL

“It’s a huge honor,“ Miller said on his induction according to the team website transcribed by Teresa Varley. “I couldn’t be more grateful and honored to be a part of this Hall of Honor class.”

Miller epitomized what it meant to be a Pittsburgh Steeler, starting 167 of the 168 games he was active for in his 11-year NFL career. He was as consistent and reliable as they come, being a weapon in the running game as a blocker as well as a possession receiver in the passing game, providing Ben Roethlisberger with a reliable target for over a decade. Miller was known for being a soft-spoken individual but was recognized by his teammates for his hard work and leadership, being named team MVP in 2012. From Miller’s perspective, there was no other way to play as a Pittsburgh Steeler.

“As I was playing, Coach (Mike) Tomlin talked about the standard all the time,” Miller continued. “I just wanted to make people who wore the black and gold before us proud and live up to their expectations. To even be mentioned with them is special. The culture here from the top down is based off of hard work. For me it was the perfect match. I couldn’t pick a better team to play for. I’m very proud to have been a part of it.”

Heath Miller was that traditional, “throwback” TE that did whatever was asked of him to help the team be successful and win football games. He manned the TE position in Pittsburgh for over a decade, being elected to two Pro Bowls and serving as a part of two Super Bowl Championship teams. Since he retired in 2015, the Steelers have been looking to find that long-term answer at the TE position, and believe they may have found it last season in second-round pick Pat Freiermuth. Freiermuth was on-hand after the announcement to congratulate Miller, as the two have become good friends since Freiermuth was drafted.

For any player coming into the Pittsburgh Steelers organization, there are many current and former players to look to as an example of what a Pittsburgh Steeler should be. If you ask anyone in the organization or in the vast fan base Steeler Nation has, there is no doubt that Miller’s name would be mentioned among the greats, and now he is being honored as such as a member of the Hall of Honor Class of 2022.

With 83 days now left to go before the Steelers play the Bengals in Week 1, here are some #83 Heath Miller highlights for yinz to watch. #Steelers #NFL #HereWeGo #HEEEEEAAAAATTTTHHHHHpic.twitter.com/vLqIhXfm1P