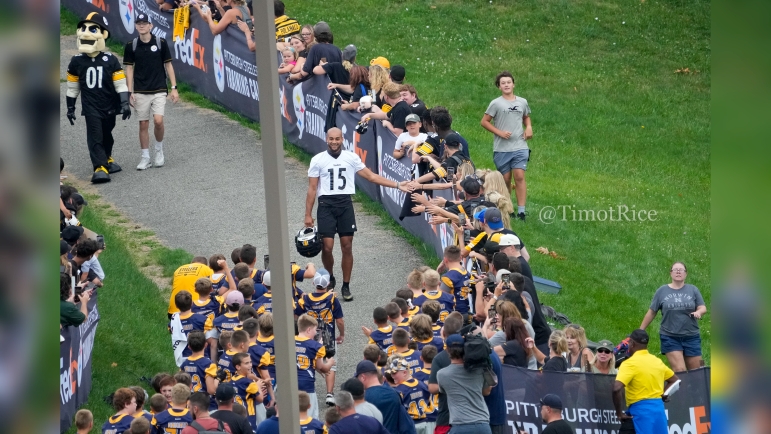 The first day of Pittsburgh Steelers’ training camp was relatively uneventful. There’s always something to learn, always something to talk about but it was a lower key day and a shorter practice, potentially due to NFL restrictions on camp “ramp-up” periods, allowing players to ease their way into the start of the season. But the most notable part of the day was the chance for four players to see increased roles and reps due to the absence of players normally ahead of them on the depth chart. Be it for injury or contractual reasons, these four players got a chance to move up the line and see more snaps.

A bit to my surprise, it was not Tre Norwood running first team FS with Minkah Fitzpatrick on NFI due to a right wrist injury. Kazee soaked up first-team reps. His play wasn’t particularly notable, it can be tough for safeties to stand out especially without pads, but his running was certainly notable. It’s unclear when Fitzpatrick could return, but it wouldn’t be a shock if the team took a conservative course of action. There’s no need to rush their star, proven safety, who can still run and condition himself while he gets 100% healthy. Maybe he doesn’t come back until after the off day for Monday’s practice. Maybe it’s longer. Until then, Kazee should continue to work those first-team reps opposite Terrell Edmunds.

While wide receivers mix and match and rotate more than any other positional group, Cody White was essentially a starter in 11 personnel yesterday. With Diontae Johnson’s hold-in, White was elevated to first team mixing between the slot and outside receiver spots. His actual day was quiet, I don’t believe he was even targeted, but the reps are important. He’s versatile and has been with the team for nearly two years. Remember Pittsburgh was patient and let White get back healthy after dealing with a hamstring injury at the start of camp last year. They know him, trust him, and he’s starting off camp with an opportunity.

If you’re wondering what player was most versatile yesterday, it was Karl Joseph. He lined up all over. At safety, covering the slot, blitzing off the edge. He also saw elevated play due to Fitzpatrick not working and Miles Killebrew leaving midway through with a pectoral injury. If Killebrew’s injury is serious, and a pec injury is not a great sign, Joseph may be in the running to take his spot. He struggled to earn a spot last year, but he’s gone through the entire offseason process with the team this year as opposed to being signed right before Week 1 last year. That’s a big difference.

Larry Ogunjobi was healthy enough to work in individual session but was held out of team periods. That helped Leal get second-team DT reps in nickel. Had Ogunjobi worked in team, either he would’ve run first team and pushed Chris Wormley to second team or Ogunjobi would’ve worked second team instead of Leal. Leal had a solid first day in run session, blowing up one run play mid-way through practice. Leal hasn’t seen much action in base, so he’ll need to maximize his work in nickel/sub-packages.