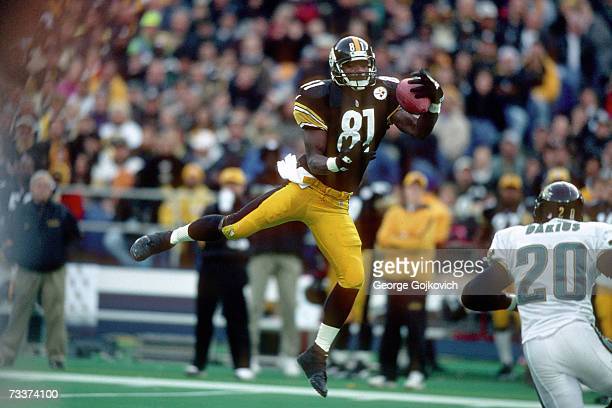 Some sad news to report as former Pittsburgh Steelers’ WR Charles Johnson has died at the age of 50, according to North Carolina’s CBS 17, who reported the news Tuesday as confirmed by Johnson’s former teammates. A cause of death is not yet known.

Pittsburgh drafted Johnson 17th overall in the 1994 NFL Draft. He spent five years with the team, catching 247 passes for 3400 yards and 15 touchdowns. His best season came in 1996, going over the 1000 yard mark for the first and only time of his career, ending the year with 1008 yards. He missed the team’s Super Bowl loss to Dallas due to injury.

Dave Bryan had just tweeted out a clip of him yesterday catching this 55-yard touchdown from Kordell Stewart against the Cincinnati Bengals in 1998. In a reply that now reads a bit more ominously, Stewart paid respects to his good friend and former teammate upon seeing that play again.

With 55 days remaining until the Steelers play the Bengals in Week 1, here's Charles Johnson catching a 55 yard TD pass from Kordell Stewart (@KSlash10) against the Ravens in 1998. #HereWeGo #Steelers #NFL pic.twitter.com/hJ7yTbv5ow

My dude my guy my friend CJ.

@nflthrowback Exactly 25 years ago on this day -9/11/93-, @RunRalphieRun's Kordell Stewart pulled off his 1st (yet only his 2nd-most famous) Hail Mary against @BUFootball from 39 yards out, thanks to the awareness of future @Steelers teammate Charles Johnson. pic.twitter.com/0dMPNDMMUF

Johnson broke into coaching later in life and at one point employed ex-Steelers Dewayne Washington and Willie Parker on his staff along with former Rams’ WR Torry Holt. Johnson was currently the assistant athletic director at Heritage High School, according to the CBS report.

Our thoughts are with the Johnson family.

Back when the Steelers drafted Charles Johnson in 1994. RIP! #Steelers #NFL pic.twitter.com/2lvNkT2sw9