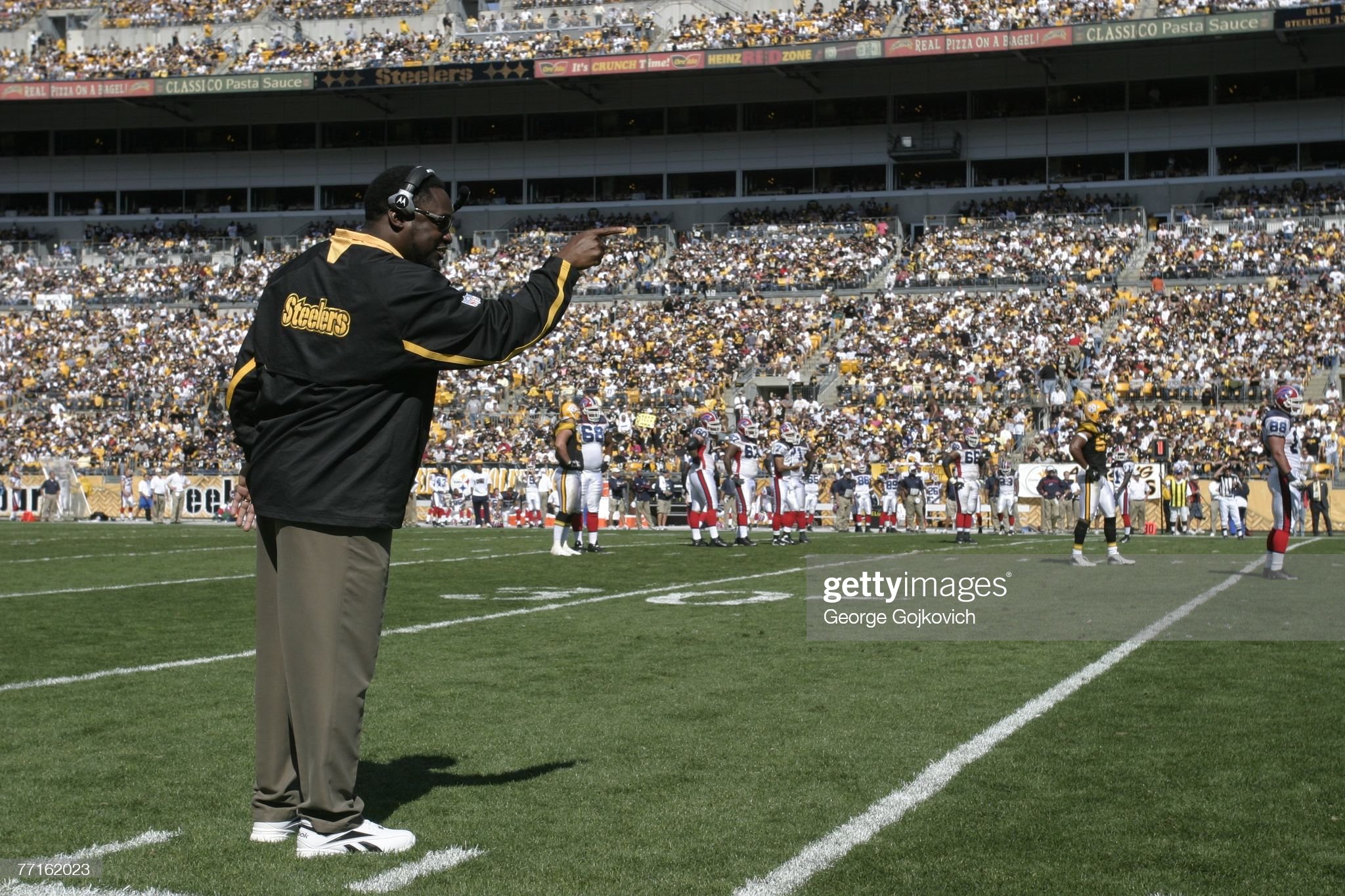 Turns out, Mike Tomlin’s home debut at Heinz Field as the Pittsburgh Steelers’ head coach ended up being historic.

No, it wasn’t historic in the sense that it was the first time since the end of the 1991 season with Chuck Noll on the sidelines that someone other than Bill Cowher was roaming the home sidelines for the black and gold. It was historic though in the fact that it was the 500th career regular season win in franchise history as the Steelers became the first AFC team to accomplish that feat.

It also happened to be an absolute beatdown of the hapless Buffalo Bills on Sept. 16, 2007 in front of 64,307 fans on the North Shore.

That day, the Steelers rushed for 181 yards, sacked Bills’ quarterback JP Losman four times, held star rookie running back Marshawn Lynch to just 64 yards rushing, and rolled to a 26-3 win on the back of four field goals from steady kicker Jeff Reed, moving to 2-0 in the Tomlin era.

Not bad for a history-making game, huh?

Opening up that matchup against the Bills at Heinz Field in 2007, there was a real buzz in the air as the Steelers were fresh off of a dominant performance against the Cleveland Browns in Tomlin’s debut as head coach.

Riding high, the Steelers got off to a fast start in the Week 2 matchup against Buffalo. On a third and one three plays into the first drive, standout running back Willie Parker showed what type of day it was going to be for the Steelers on the ground, ripping off a 21-yard right around right tackle, sparking the Steelers’ offense.

Look at the great down block by tight end Heath Miller, the pull and pin by right guard Kendall Simmons, and the devastating block in space by second-year fullback Carey Davis. What a thing of beauty.

The Steelers started rolling from there as quarterback Ben Roethlisberger picked up 10 yards on a scramble on third and seven, and Parker ripped off a 9-yard run before the drive stalled in Bills’ territory, forcing the Steelers to settle for a 34-yard field goal by Reed to take a 3-0 lead with 8:03 left in the first quarter.

Defensively, the Steelers got off to a slow start as Lynch — the 12th overall pick in the 2007 NFL Draft, gained 12 yards on his first carry of the day. Pittsburgh buckled down though as James Harrison sacked Losman for a loss of seven and then, after a 15-yard gain by receiver Roscoe Parrish on third and 17, the Steelers forced an incompletion by Losman for the turnover on downs near midfield.

The very next play the Steelers made one of the few mistakes of the day as Roethlisberger looked deep for Santonio Holmes but was picked off by safety Jim Leonhard. The Pittsburgh defense stood tall though, forcing a quick three-and-out to get the football right back.

A 12-yard connection to Cedrick Wilson from Roethlisberger on the second play of the drive got the Steelers’ offense going. Parker then gained 11 yards on a powerful run up the middle, before Roethlisberger then connected with Hines Ward for two receptions of six yards each, and a 12-yard catch, before then finding Holmes for nine yards.

An 8-yard run by Parker put the Steelers at the Bills’ 10 yard line, but the drive stalled, leading to Reed’s second field goal of the day — this one from 28 yards — for a 6-0 lead with 10:05 left in the second quarter.

Pittsburgh’s defense again swarmed the Buffalo offense, forcing another quick three-and-out, giving the Steelers’ offense the ball once again. Roethlisberger heated up, finding rookie tight end Matt Spaeth for nine yards, before then firing a dart over the middle to wide receiver Nate Washington between three Bills’ defenders for a gain of 21 yards, putting the Steelers in Buffalo territory.

Roethlisberger did a remarkable job manipulating the Bills’ secondary on the strike, moving the safety with his eyes to open just enough space. Look at the arm strength on a young Roethlisberger here too.

Following the completion to Washington, the Steelers turned to Parker on the ground.

After a huge run to open the game, Parker stayed hot, ripping off a 24-yard run off left tackle behind the likes of Marvel Smith and Alan Faneca, putting the Bills entirely on their heels defensively.

Davis played very well in this game, especially early. Looking back, he was a solid fullback for the Steelers in the 2007 season, which saw Parker rush for 1,316 yards on 321 carries.

Unfortunately for the black and gold, the drive stalled after that, leading to a third field goal from Reed as the consistent kicker drilled this one from 39 yards out for the 9-0 lead with 3:13 left in the first half.

Trailing by two scores, the Bills’ offense really couldn’t get anything going. Two offensive penalties — a holding and an illegal shift — stalled the next Buffalo drive, forcing another punt from Brian Moorman, giving the Steelers the football late in the first half with a chance to add on.

Pittsburgh did just that as Roethlisberger moved the Steelers right down the field through the air.

It all started with a 30-yard strike to Washington over the middle.

Talk about being wide open in the two-minute drill. Washington sure had a knack for getting himself open and showing Roethlisberger his numbers.

After the 30-yard connection, Roethlisberger then found Ward for 10 before then throwing a dart to Holmes for a gain of 17, holding onto the football and remaining patient in the pocket in trademark Roethisberger fashion with the vintage pump fakes.

With the 17-yard hookup to Holmes on the catch-and-run, the Steelers were just 13 yards from pay dirt, but the drive stalled again as the Steelers struggled to finish off drives, leading to a 31-yard field goal from Reed with nine seconds left for the 12-0 lead, which held up into halftime.

Coming out of the break, the Bills put together their lone scoring drive of the afternoon.

A 63-yard kickoff return by Terrence McGee sparked the Bills’ offense before Lynch picked up two gains of eight yards on the ground. Pittsburgh’s defense buckled down in a big way though in the red zone, forcing Buffalo to settle for a 24-yard field goal from Ryan Lindell, making it 12-3 with 9:58 left in the third quarter.

From there, the Steelers took over for good.

It was Parker who fully took over the game for the Steelers. After a 7-yard run to open the drive, Parker then ripped off a 16-yard gain on third and two, taking the wind right out of the Bills’ sails.

What a terrific play in the hole by Parker to avoid the garbage at his feet. He was so shifty in space. What a flashback here to one of his better games.

With Parker rolling offensively, the Steelers didn’t let up. Parker then added a gain of six yards before Roethlisberger found Holmes for a gain of 27 yards, eventually setting up a 1-yard touchdown from Roethlisberger to Spaeth — his second straight week with a touchdown in his rookie season — off of play-action to make it 19-3 Steelers with 4:46 left in the third quarter.

A huge lead in hand at home, the Steelers’ defense put the game away.

Larry Foote sacked Losman on fourth and two forcing a turnover on downs. The next Bills’ drive saw Clark Haggans sack Losman for a loss off 11, eventually forcing a punt. Then, it was all Parker.

The Steelers’ standout running back reeled off gains of nine and two yards before Roethlisberger hit Heath Miller down the left sideline for 29 yards, setting up Parker’s game-sealing 11-yard touchdown up the gut.

Late in the game, LaMarr Woodley sacked Losman for a loss of eight yards, and cornerback DeShea Townsend tackled Parrish short of the sticks on fourth and eight, forcing another turnover on downs.

The Steelers then closed out the game with backup running back Najeh Davenport, who rolled to gains of seven, 13, 11, nine and six on five straight carries before backup quarterback Charlie Batch kneeled out the win in Tomlin’s home debut, sending the Steelers to a 2-0 start.

In the win, Roethlisberger completed 21-of-34 passes for 242 yards, one touchdown and one interception. Parker added 126 yards and a score on 23 carries on the ground, while Davenport closed out the game with 46 yards on six carries.  Ward led the way in receiving with five catches for 55 yards, while Washington added three catches for 60 yards and Holmes chipped in with three catches for 53 yards.

Losman threw for just 154 yards on 15-of-25 passing, adding 38 rushing yards on four attempts. Lynch rushed for 64 yards on 18 carries, while Parrish led the Bills with six catches for 56 yards.

Defensively, James Farrior led the Steelers with 10 tackles in the win, while Haggans, Woodley, Harrison and Foote recorded one sack each.

That season, the Steelers went on to finish 10-6, winning the AFC North in Tomlin’s first season before falling to the Jacksonville Jaguars at home in the Wild Card, 31-29.