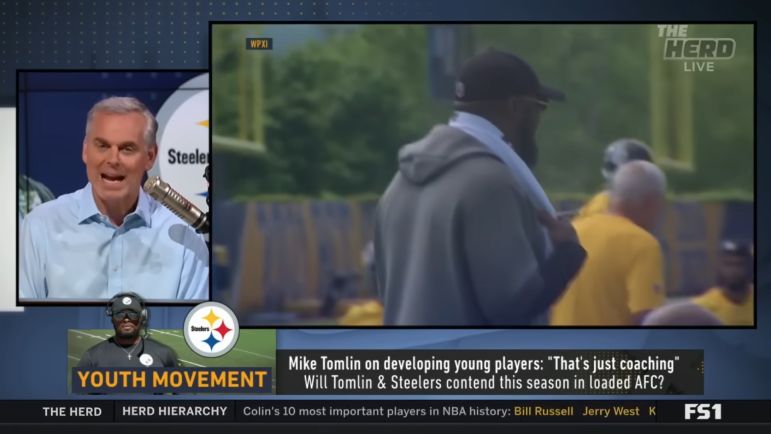 As one of the most traditionalist franchises in the NFL, one could say that the Pittsburgh Steelers have a bit of an identity crisis. It wouldn’t quite be accurate to say that they buck trends toward hiring offensive coaches considering that they haven’t hired a coach in a decade and a half, but rarely has the team’s offensive prowess ever matched its defense.

Now, they’re not the only team about which that’s true—and one of them is in the same division—but without a great offense, there is understandable hesitation about committing to them as a Super Bowl contender. Even when they had Ben Roethlisberger at his height, the question was always, ‘Could they beat Tom Brady? Could they beat Aaron Rodgers?’.

The answer ended up being no, but they managed to win a couple of times by avoiding them. Is this Steelers team anywhere close to beating the Bradys and Rodgerses of today, in terms of matching offensive firepower? You can include Colin Cowherd among those—which is probably about everybody—who doesn’t think so.

“I love so much of what the Steelers do, but it’s hard for me to invest in, ‘That’s a Super Bowl team’. I always struggle with what to do with them”, he said in a recent installment of his show, after extolling the virtues of Mike Tomlin following his recent podcast appearance and his approach and attitude toward coaching. “I know they’ll do a lot of things well”. But, he also said, “I just don’t feel like they have a good feel for offense. They’re not as detail-oriented as a Rams or a Niners on that side of the ball”.

“It’s hard for me to invest in this team as a Super Bowl team when I don’t think the side of the ball that 2022 football is about, I don’t think they’re great at it”, he said. “They’re running through offensive coordinators, I don’t love their decisions on those. Offensive line never quite feels right”.

Now, that’s not entirely true. There was a good half a decade or so during which they had one of the best offensive lines in the league, and regularly sent multiple linemen to the Pro Bowl, with no obvious weak links in the line as a whole. But I’m sure almost all of us have lived through most of the past decade of Steelers football. How many times have you felt ‘This offense could beat anybody right now?’

Probably not often. And the more the game turns toward the offensive side of the ball, the harder it is to buy into the Steelers as a legitimate Super Bowl contender. But who knows? Maybe Matt Canada really does have the creative ideas to get the most out of this team. Maybe Kenny Pickett really does have what it takes to be a franchise guy. And maybe Najee Harris really is that good, when given an offensive line that can at least rise to the level of competence.