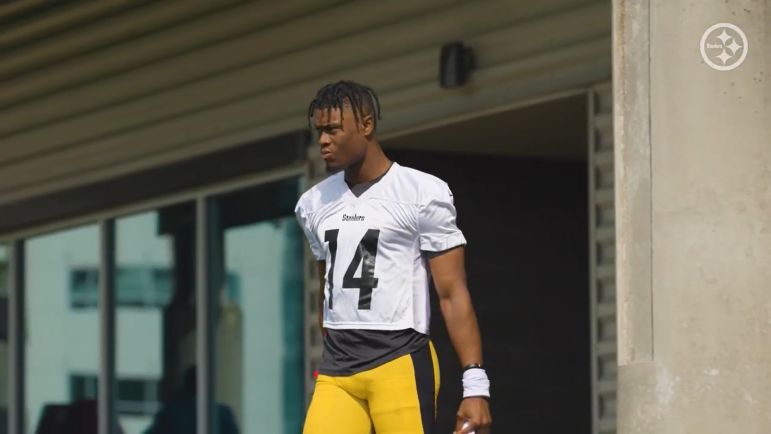 What a world it is when adding weight can be considered a good thing.

That is the case for plenty of athletes in sports around the globe, looking to add size and muscle mass to their frames to improve performance as well as hold up with the physical rigors their sports entail. Football is no exception, as players at all levels need to maximize their frames to produce exceptional strength and explosiveness while also having the body armor to absorb the punishment that occurs in-between those white lines on the gridiron.

Much has been made about RB Najee Harris and his weight this offseason, reportedly coming in at 244 lbs. Many have seen this as a potential negative for a running back who needs to be fast and dynamic with the ball on his hands. However, speed has never been the key part of Najee’s game, but rather being a shifty runner with the size and strength to carry the load for an offense on the ground for an entire NFL season.

Mike Prisuta of Steelers.com recently put out a piece highlighting Canada’s comments on Harris and the size of his quads which we wrote about at Steelers Depot back during training camp and OTAs. Still, Canada went out of his way to bring up another name when talking about Harris in terms of size that may come as a surprise to some people: rookie WR George Pickens.

“I didn’t notice the quads (on Harris), but if you don’t notice how big George is, I mean, he’s a freakin’ big dude,” Canada said according to Prisuta on Steelers.com.

Frankly, Canada mentioning Pickens in-light of his comments of Harris and his size comes as a pleasant surprise. As we well know, Pickens suffered a torn ACL during spring practice last year at Georgia prior to the start of the 2021 season. Pickens managed to battle back from that injury and get back on the field for the team’s stretch run, playing in certain packages and making a few splash plays to help the Bulldogs capture a National Championship.

When Pickens checked into the NFL Combine, he weighed in at 195 lbs. while standing 6’3 1/4”. Considering his size and height, 195 lbs. is a tad underweight from where you want a receiver of Pickens’s stature to be. However, when Pickens made it to Pittsburgh after the draft, his listed weight on the team website jumped to 200 lbs.

As is often the case with football players who suffer a major injury, they can’t train effectively in terms of weightlifting to keep their bodyweight up, thus leading to them losing weight while rehabbing. This appeared to be the case with Pickens who was listed at 200 lbs. back in college prior to the knee injury. The atrophy naturally associated with a lack of resistance training likely caused his bodyweight to drop into the 190s, having it likely being even lower than the 195 lbs. he was listed at the NFL Combine as most players will consume plenty or water and sodium prior to the weigh in, as I have experienced during my time working with the Iowa Hawkeye and Florida Gator Football Strength and Conditioning Programs.

However, now over a year removed from the ACL injury, Pickens has been able to hit the weights without any physical limitations, likely causing his bodyweight to jump back up to where it was re-injury and likely above that. Prisuta mentioned in the piece that Pickens looked bigger than his listed 200 lbs., and that can be believable given the fact he is preparing his body for the rigors of the NFL game compared to college as well as the fact that Pickens is still only 21 years old and is still growing into his body.

You don’t want you wide receiver to be unable to move, but in the case of Pickens who wins as a combative catch receiver on jump ball situations as well as a receiver that can stretch defenses vertically, you must be able to play through contact. Pickens is sure to see that at a greater level in the league compared to the college game, thus filling out his frame should be seen as a good thing.