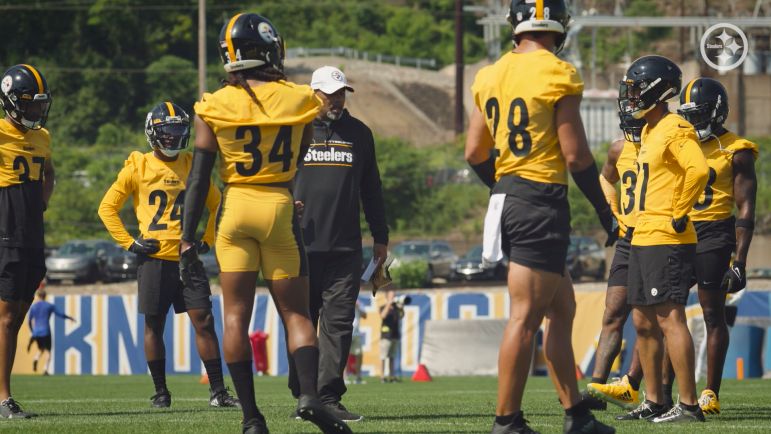 Topic Statement: The Steelers will carry 11 or more defensive backs.

Explanation: Forever an integral position, in today’s game, you can never have enough players to cover wide receivers and running backs and tight ends. While the Steelers’ secondary may lack premiere talent outside of Minkah Fitzpatrick, they do have numbers.

This is what the numbers are telling us since the addition of Damontae Kazee at safety. They’re not going to cut Tre Norwood and they just re-upped Miles Killebrew as a top special teams player. That gives them a locked-in number of five safeties with Fitzpatrick and Terrell Edmunds.

Then at cornerback, you have your top three contributors in Cameron Sutton, Ahkello Witherspoon, and Levi Wallace. They’re not giving up on James Pierre, who they think has starting potential, and is also a key special teams player. Arthur Maulet is one of only two true cornerbacks really vying for a roster spot who can play in the slot, and he’s also a special-teamer. Then you have Justin Layne, who has logged over 500 special teams snaps over the past two years. That’s six without even trying. I didn’t even mention Karl Joseph.

The advantage of having defensive backs with diverse skill sets is that you can save on roster spots that way. Because Maulet, Norwood, and Kazee are all capable of playing both slot and safety, they can part with somebody like Layne, whose only contributions would likely be special teams, which can always be turned over.

Positional numbers tend to have a way of sorting themselves out. Hopefully rather than through injury, the Steelers’ secondary can be sorted productively. If they have too many talented defensive backs, they may be able to part with one via trade, even if it’s a conditional seventh-round pick.

But let’s be honest, somebody like Layne, maybe even Maulet and Pierre, perhaps even Norwood, stand a good chance of clearing waivers if they don’t make the team. The practice squad is still a viable option to keep some of these guys. There are just too many numbers needs at other positions to go heavy when you have players who can contribute at multiple spots in the secondary.