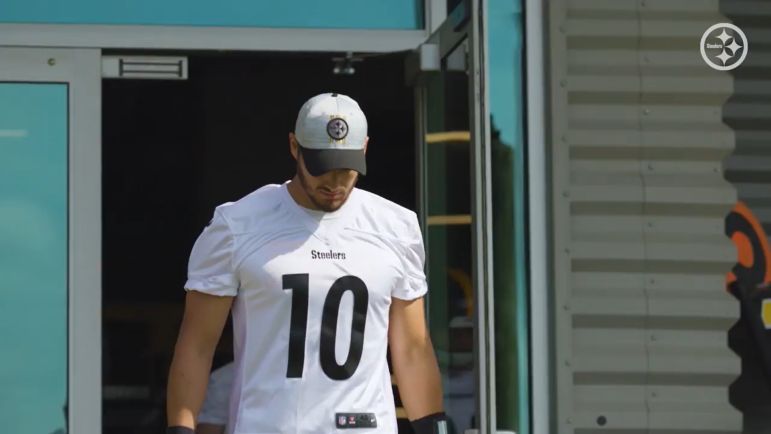 Bryant McFadden is confident in QB Mitch Trubisky. But not too confident. McFadden joined The Maggie And Perloff Show Thursday to talk about the AFC, AFC North, and his former NFL team. McFadden offered an optimistic take on Trubisky, believing he’s shown the tools to win at the NFL level, and if the starter, lead Pittsburgh into the postseason.

Trubisky has a career 29-21 record, highlighted by his lone Pro Bowl season, going 11-3 in 2018 with the Chicago Bears. That year, he threw a career-high 24 touchdowns while completing exactly two-thirds of his passes as the Bears won the NFC North, though they were double-doinked out of the playoffs.

And in fact, that record is better than Watson’s (28-25) and Burrow’s (12-13-1). Of course, it’s doubtful McFadden would actually rank Trubisky as the division’s second-best arm.

Still, McFadden believes those glimpses are enough reason to believe in Trubisky this season.

“He was able to have an above .500 winning record with a lot of dysfunction around him. He’s shown the ability to win games by any means necessary.”

Of course, before he can win the North, he has to win the Steelers’ starting job. He’ll battle fellow veteran Mason Rudolph and rookie Kenny Pickett this summer in training camp. Trubisky figures to enter camp as the starter but will have to secure the job throughout August. Even if he does and plays well as McFadden suggests, he still isn’t picking Trubisky to lead the Steelers to another AFC North crown.

“I probably would say Cincinnati.”

The Bengals are the 2021 AFC Champs, upsetting the Kansas City Chiefs in the title game before suffering a close Super Bowl loss to the Los Angeles Rams. They return with a better offensive line and on paper, look like one of the AFC’s best teams. But the North figures to be competitive wire-to-wire. Last year, first and last place was separated by just two games.

Despite McFadden choosing the Bengals to win the AFC North, he believes a Trubisky-led Steelers team is good enough to get into the postseason.

Pittsburgh has had little issue making the playoffs. Winning in the postseason has been a different story, a drought that’s gone on now six straight seasons. But getting to the point with Trubisky under center would be considered a win by most. It’d be a good place for this team to be in come January.