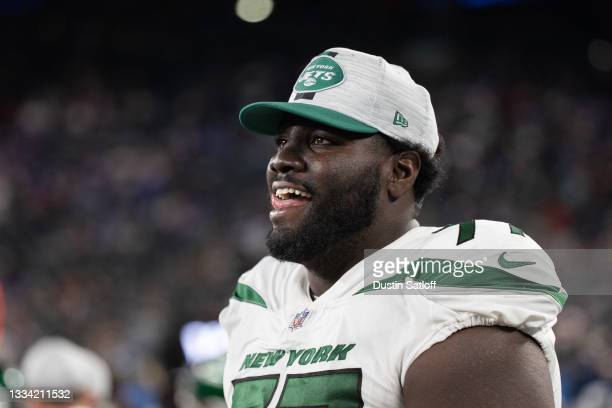 Alex Kay of Bleacher Report recently published an article proposing Bold Predictions for NFL’s Top 5 Trade Targets this offseason prior to the start of the 2022 campaign. Names like Jimmy Garoppolo, D.K. Metcalf, and Deebo Samuel were included, as they have often been floated around this offseason due to contract disputes and the potential loss of a starting job in the case of Garoppolo.

However, Kay proposed that the Pittsburgh Steelers could be in line to get in on the action, making the bold prediction that they should pursue Jets OT Mekhi Becton if made available by the team.

“Several teams stand out as potential suitors for Becton due to their lack of talent and upside on the offensive line. The Pittsburgh Steelers may be the most desperate after deploying a line that Pro Football Focus ranked No. 26 in the league last year. Rookie left tackle Dan Moore Jr. was one of the most disappointing players on the unit, earning a lowly 57.8 PFF grade while giving up seven sacks and getting flagged for five penalties over 1,079 snaps. He’s one of the projected returning starters on a line that PFF projects to be the third-worst in the league in 2022.”

Kay has the Steelers parting with a second-round pick and a fourth-round pick in the 2023 NFL Draft to acquire Becton in this exercise. Notice how the title states this scenario as a “bold prediction”, meaning there isn’t any real interest that we know of in terms of Pittsburgh being even remotely interested in acquiring the services of Becton via trade.

While trading for Becton sounds good in-theory by someone on the outside like Kay says in his article, there are several reasons why this move is highly unlikely. First, Becton notably struggled with injuries last season, being relegated to just one game played after suffering a knee injury that cost him nearly the entire 2021 season. During that rehab process, Becton reportedly struggled to keep his weight in check as well as his work ethic to try and get back after the injury, resulting in the process going from an expected four-to-six-week recovery to a season-long recovery.

Yikes 😳 @DanGrazianoESPN said there is ‘frustration’ w/ #Jets coaching staff on Mekhi Becton, ‘they’d like to see him not be overweight’ + ‘they’re at a point where there not sure what to do about it anymore’ + ‘he has the backing of the front office’: 🎙 #Greeny #TakeFlight pic.twitter.com/ZXVVyK7y2x

Pittsburgh has acquired former first round picks via trade before trading for CB Justin Gilbert back in 2016 from the Browns and most recently S Minkah Fitzpatrick from the Dolphins. Still, while the Fitzpatrick trade turned out to be a huge success for Pittsburgh, he was healthy and motivated when the deal got done, two things that we can’t guarantee are the case with Becton at this moment in time.

A thread on #Jets OT Mekhi Becton and his injury. Mekhi, in his 2nd season with NY, went down with 1:25 left in the third quarter in week one against the Panthers on Sunday, Sept. 12. He was rolled over on by a teammate and Panthers defender and suffered a patellar dislocation. pic.twitter.com/c0SJvX1xrx

Another reason why trading for Becton wouldn’t be a probable move for Pittsburgh to consider is the opportunity cost vs. what they are actually getting in return. A second- and fourth-round selection for an injured player that has reported motivation concerns wouldn’t be a wise investment from Pittsburgh’s perspective. Even if the asking price was lowered, there is no guarantee that Becton at this point-in-time would be head-and-heels better that either Dan Moore Jr. or Chukwuma Okorafor, who are both young, developing tackles as well. Both are healthy and have been in Pittsburgh’s system for at least a full season and letting them play out the 2022 campaign will allow Pittsburgh to evaluate whether either can be the long-term solution at their respective spots.

“While Becton may not be in peak form right now, he did have a promising 74.4 PFF grade as a rookie. HE could be an ideal buy-low candidate to improve Pittsburgh’s offensive line as it prepares for life without longtime quarterback Ben Roethlisberger.”

Overall, I understand the intrigue Kay has here at the possibility of placing Becton in Pittsburgh, but both the plausibility and probability of this scenario playing out are slim-to-none as mentioned above. There are too many red flags associated with Becton to be confident in part with the necessary draft capital to acquire him, not to mention that the price Kay proposes isn’t the “buy-low” he makes it out to be. There is no denying that Pittsburgh’s OTs are still a position up in the air entering into 2022, but this bold prediction doesn’t seem like something the Steelers would have interest pursuing even if it was an option.

Whole o-line protected well against the Ravens' chaotic front but Dan Moore Jr. might have had his best game after an uneven rookie season. Key run blocks in the 4th quarter but steady pass pro all game. More patient in his set/punch. Cut-up of his best reps. #Steelers pic.twitter.com/GneGElCk10

What are your thoughts on the article? Do you think Pittsburgh would/should have interest in Becton if he was made available by New York? What is your reasoning? Please leave your thoughts in the comments section below and thanks again for reading!