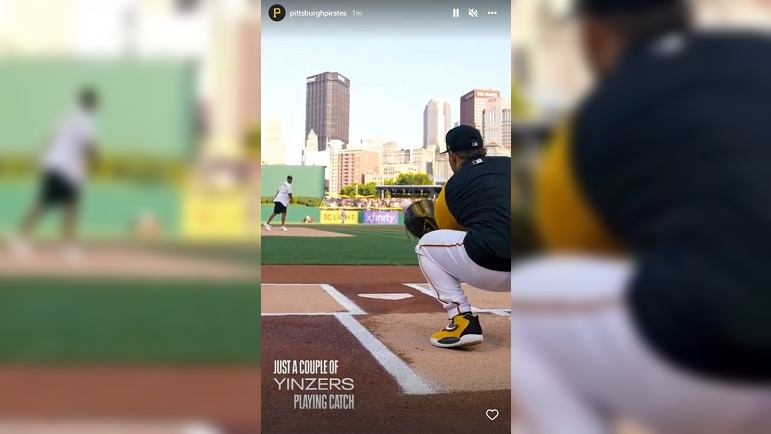 Well folks, former and newly-retired Steelers quarterback great, Ben Roethlisberger, has been in the public eye quite a bit over the last several days. Last week, he made headlines citing a stark contrast between when he first came into the league versus the past several seasons, attributing the team’s playoff failures to players with “me-first” attitudes. After hearing team captain and All-Pro veteran Cam Heyward bristle at those comments, Big Ben yesterday came out and said perhaps he “should’ve been more detailed” with his wordings, as it certainly didn’t apply to every teammate. Le’Veon Bell or Antonio Brown anyone?

Tonight, he was in the public eye in a much more positive fashion. A brief time ago, for the first time spanning his 18 seasons in the Steel City, Roethlisberger threw out the first pitch for the Pirates-Phillies game at PNC Park as part of the “Yinzerpalooza” festivities.

Big Ben has been in the public eye quite a bit since hanging up the cleats following the team’s 41-21 dismantling by the Chiefs in January’s Wild Card round. He was honored earlier this year at a Penguins game, and was even spotted taking batting practice with several Pirates players earlier this spring.

Roethlisberger also was interviewed during the third inning of the game and talked about throwing out the first pitch.

“[Pitchers JT Brubaker and David Bednar] said don’t skip it and don’t airmail it. I said ok, thanks. I wasn’t nervous until the anthem happened. And then the anthem happened and I felt these instant butterflies and jitters…I took a little something off and I threw a strike and that’s all that matters.”

Roethlisberger said although he played high school baseball, he never entertained the idea of going pro. A good move in hindsight. He also denied any urge to return to football but said he may catch a practice in Latrobe.

“Any itch I have I’m scratching by texting Pat Freiermuth right now, seeing how he’s doing. I’m enjoying this being here with my family. With those guys nothing but the best…excited to maybe sneak over there one day and catch them at practice. But as far as being out there, I’m good.”

While taking in the 3rd inning of the @Pirates & Phillies, Ben talked with Dan Potash about being…<checks notes>…nervous? pic.twitter.com/oVSy3aejpN

As the aforementioned “Yinzerpalooza” is a celebration of everything “Pittsburgh-ian” featuring the return of Pirates alumni and a pregame pierogi eating contest, what could put the icing on the cake better than letting the best QB in Steelers history throw out the ceremonial first pitch, which was indeed ruled a strike to current Pirates pitcher David Bednar.

This indeed was the first pitch he’s thrown out, a funny circumstance considering he spent his nearly two decade career in Pittsburgh. However, it wasn’t his first go-round with the Pirates, as back in the summer of 2014, he participated in batting practice with them, and in the process, nailed former pitching coach Ray Searage with a line drive.

Time will tell if #7 remains as heavily-involved in the public eye as he’s been recently. Perhaps with training camp currently underway, he’s getting that “itch” to get back at it, that most new retirees get this time of year. It wouldn’t necessarily be a bad thing, especially for the young QB’s to get some sideline support from a franchise great. One thing is certain, that in five years from now, right around this time, the halls of Canton will be setting in stone one of the best to ever wear a Steelers uniform.