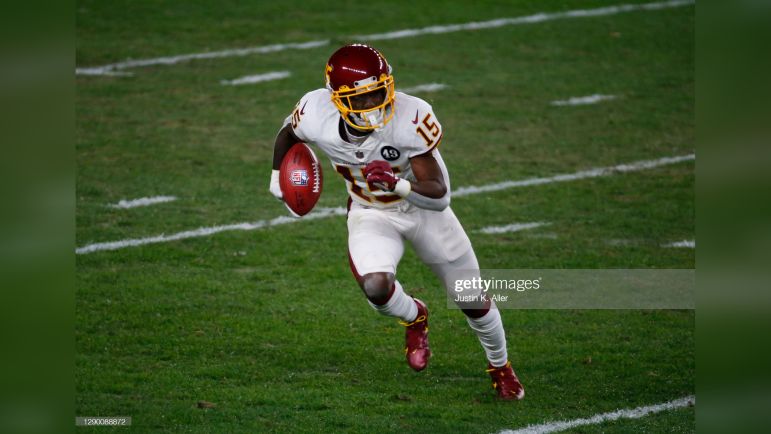 Reasoning: After spending all of the 2021 season at least on the team’s practice squad, veteran wide receiver Steven Sims may have a hard time doing even that this year with all that the Steelers have done at the position, particularly in drafting George Pickens and Calvin Austin III.

It is safe to say that Steven Sims is not currently viewed by many people as being inside the roster bubble to make the 53-man roster later this year. The Steelers lost some wide receivers in free agency, but they are still bringing back Diontae Johnson and Chase Claypool, for starters.

They also signed Gunner Olszewski to replace Ray-Ray McCloud as a return man, and then claimed Miles Boykin off waivers. On top of that, they used second- and fourth-round draft picks to expand the position with young talent like George Pickens and Calvin Austin III.

As if that weren’t enough, the other veteran wide receiver who spent last season on the practice squad, Anthony Miller, is the former teammate of Mitch Trubisky, who is likely to be the Steelers’ starting quarterback at the beginning of the 2022 season.

You can even throw Cody White’s name in there, who spent the year ahead of Sims on the depth chart. From all angles, it doesn’t look great when it comes time to evaluating his chances of making the jump to the Steelers’ 53-man roster.

But he does have a trump card, of sorts. All he really has to do is win the return man job. Olszewski’s spot isn’t etched in stone or anything, even if they did sign him as a free agent. His deal isn’t so grandiose that they couldn’t even entertain the notion of cutting him.

Failing winning a return job (and he did well as a kick returner as a rookie in 2019, for example, so it’s not foreign to him), Sims is going to have a hell of a time cracking the roster, or perhaps even catching on anywhere in the league this year. But that’s the story of so many players year after year. Most people don’t end their careers how and when they want to.