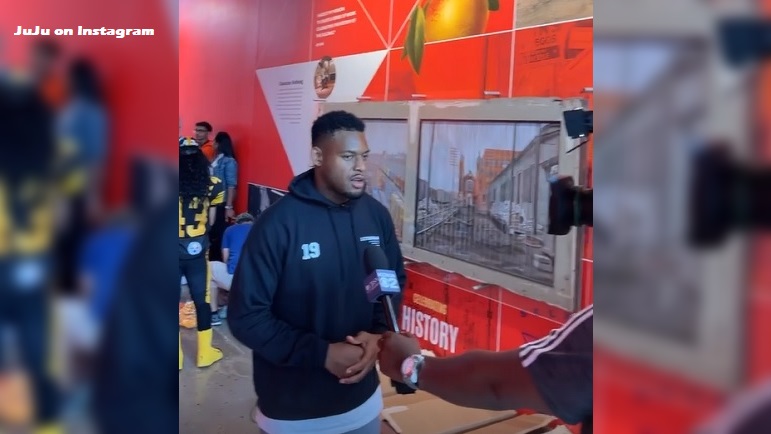 Wide receiver JuJu Smith-Schuster was back in Pittsburgh on Sunday to properly say good-bye and thank you to all the fans of the Pittsburgh Steelers who supported him since being drafted in 2017. The event, which reportedly took place outside The Strip District Terminal, included a small fee to attend that will benefit several local charities via the JuJu Foundation. As you would expect, the new Kansas City Chiefs wide receiver drew quite a crowd on Sunday. The former second round draft pick out of USC explained to Brian Batko of the Pittsburgh Post-Gazette on Sunday why he chose now to return to Pittsburgh to hold his farewell event.

JuJu Smith-Schuster is back in town at a going-away event in the Strip. He told me everything happened so fast leaving the Steelers and signing with KC that he never got the chance to really say goodbye. So he’s signing everything, taking photos and even making TikToks with fans. pic.twitter.com/7eUVEkAIsj

“As soon as I signed [with the Chiefs] I had to move out, went to KC, moved in, but at the same time I never really had a going-away — I would say story, I guess? I thought this was the time to do it,” Smith-Schuster said, according to Batko. “I have so many Steelers fans I did not expect to see today.”

Smith-Schuster, who missed most of the 2021 season due to a shoulder injury that required surgery, signed a one year, $3.25 million contract with the Chiefs back in March as an unrestricted free agent. While the base value is low overall and while only $2.49 million of his new contract is guaranteed, Smith-Schuster can earn another $7.5 million in incentives in 2022.

“I could see myself back here [in Pittsburgh],” Smith-Schuster said, according to Batko.

So, what are the real chances of Smith-Schuster returning to the team that drafted him out of USC? First, it probably depends on how he plays with the Chiefs in 2022. If he has a season similar to, or better than, the one he had with the Steelers in 2018, that included him catching 111 passes for 1,426 yards and seven touchdowns, his market value will likely jump way out of Pittsburgh’s budget. If, however, Smith-Schuster has just an average 2022 season, and one that includes him catching less than 50 passes, a return to Pittsburgh next offseason might be plausible.

A return to Pittsburgh next offseason for Smith-Schuster might also mainly depend on what ultimately happens with Steelers wide receiver Diontae Johnson this summer. Should Johnson wind up signing a lucrative contract extension prior to Week 1 of the 2022 regular season, such a transaction would likely severely diminish the chances of Smith-Schuster returning to the Steelers for more than the league minimum next offseason. Speaking of Johnson, Smith-Schuster is hoping to see his former teammate land a lucrative deal from the Steelers this summer.

“I hope so, man,” Smith-Schuster said Sunday, according to Batko. “I hope one receiver gets paid out of the Steelers. I think the past five years they’ve drafted a receiver almost every year, but I hope someone gets paid. I hope it’s Diontae.”

The Steelers selected two wide receivers in the first four rounds of the draft this offseason in George Pickens and Calvin Austin III. The team also added former Baltimore Ravens wide receiver Miles Boykin to the fold via a spring waiver claim and former New England Patriots wide receiver Gunner Olszewski via free agency. Those wide receiver moves were necessary, however, due to the team losing Smith-Schuster, James Washington, and Ray-Ray McCloud via free agency.

Should Johnson not sign a contract extension this summer, both he and Boykin might be gone next offseason. Currently the Steelers have just five wide receivers under contract for the 2023 season, and they are Claypool, Pickens, Austin, Olszewski, and Tyler Snead, a rookie undrafted free agent who is not expected to stick past the preseason. With Olszewski being more of a return specialist than he is a wide receiver, you can see that the Steelers could have a need for an experienced wide receiver such as Smith-Schuster next offseason.

Over the years, the Steelers have had a few wide receivers that they had originally drafted return for second stints with the team after leaving to play for other organizations. Plaxico Burress and Antwaan Randle El are two examples of that happening.

Judging by what Smith-Schuster said on Sunday, he would likely be more than open to returning to Pittsburgh next summer as part of him signing back with the team as he seems to miss the very strong following that he built in Pittsburgh over the course of the last five years.

“Even today, this shows a lot, that I still have fans out here coming out to support me,” Smith-Schuster said on Sunday.

Former Pittsburgh Steeler Juju Smith-Schuster is using today’s event to thank his fans and say goodbye to Pittsburgh as his career has taken him to Kansas City. pic.twitter.com/WMdlErNLO6