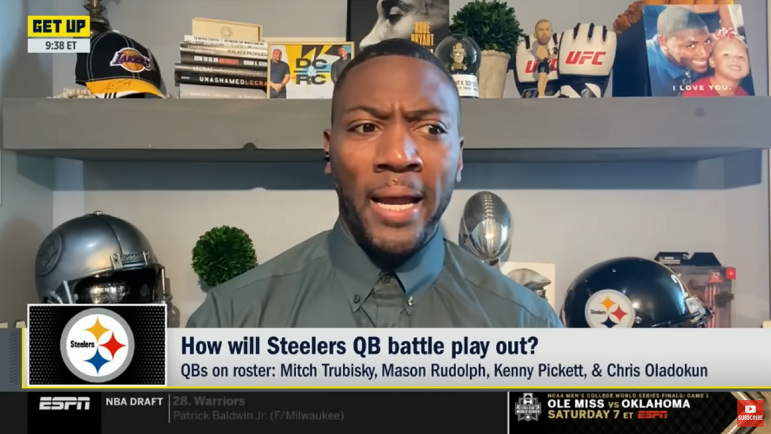 After an offseason full of change from the front office on down to the roster, seeing familiar faces like Kevin Colbert, Ben Roethlisberger and Stephon Tuitt retire, and JuJu Smith-Schuster exit in free agency, the Pittsburgh Steelers are sporting a relatively new look ahead of the 2022 season.

Though future Hall of Fame head coach Mike Tomlin, reigning Defensive Player of the Year T.J. Watt and All-Pros Cam Heyward and Minkah Fitzpatrick remain, there are quite a few questions swirling around the black and gold ahead of the start of the 2022 season, and it largely focuses on the changes under center. After 18 seasons, Roethlisberger hung up his cleats for good, ushering in a new era with free agent signee Mitch Trubisky and first-round draft pick Kenny Pickett.

Those additions might not move the needle much for analysts across the media landscape, which has the Steelers favored to finish last in the AFC North and miss the playoffs under Tomlin. Former Steelers’ safety and current ESPN analyst and The Pivot Podcast host Ryan Clark certainly doesn’t feel that way, especially after having Tomlin on his show last week.

Clark, appearing on ESPN’s Get Up! Wednesday morning, stated that he believes the Steelers are going to be a better team than they were last season, and that he feels much better about that Steelers’ roster now, on paper, than he has in recent weeks and months while reflecting on his interview with Tomlin.

“Well, I think the biggest takeaway is that Mike Tomlin is authentically him. He’s a leader of men that truly means the things that he says when he started talking about his quarterback situation,” Clark said on Get Up!, according to audio via ESPN.com. “He did sound excited. He sounded excited to start that new chapter and not necessarily that you’re not attached to Ben [Roethlisberger] no more, but you’re moving into something else that you have to coach your way through.

“And he said something during the podcast, he said, ‘I don’t run away from coaching,’ where he’s gonna have to coach this team, right?” Clark added, according to audio via ESPN.com. “This team is now gonna be built in a different way. The money is allocated to different places. We got T.J. Watt, Minkah Fitzpatrick, the highest paid at certain positions. You have Najee Harris who’s gonna move into more of a leadership role and you have a quarterback who’s going to be more mobile and be able to push the ball down the field more than you could last year…listening to Mike T talk about what this team can be in 2022 actually got me more excited than I was just looking at the roster on paper. We’re going to see if he’s truly the Hall of Fame coach we all believe he is.”

This version of the Steelers certainly is going to look much different than it has in years past with Roethlisberger at the helm. Late in Roethlisberger’s career as he reached the height of his powers as a passer, the Steelers relied heavily on throwing the football as Roethlisberger had names like Antonio Brown, Martavis Bryant, and JuJu Smith-Schuster to throw the football to. Of course, Le’Veon Bell was an elite-level back during that same time, while James Conner went to the Pro Bowl in 2018.

It was a pass-first team though, but with Roethlisberger now off into retirement it’s clear that the Steelers are building a certainly old-school identity, where they want to pound the rock with Harris and wear teams down, shorten games, and lean heavily on a defensive filled with standouts.

That’s not to say they don’t believe in Trubisky and Pickett at quarterback because they most certainly do. There’s just a clear identity they’re looking to achieve in 2022 and beyond, and it will be up to Tomlin and the rest of his staff to achieve that from a coaching standpoint.

As a former defensive player, Clark stated on Get Up! that though there are questions about the quarterback in general with the Steelers, it won’t matter much unless the Steelers can stop the run defensively. If the Steelers can do that, they will be better offensively just with the pieces added at quarterback and receiver, as well as a rebuilt offensive line. The focus will certainly be on Trubisky and Pickett though, and rightfully so.

“We don’t know how he’s [Pickett] gonna develop or what he’s gonna develop into,” Clark added, according to audio via ESPN.com. “But I do know this: they have a great head coach that’s gonna motivate this group of men to say, ;listen, everyone’s counting us out, but we don’t have to be counted out. We can rise above everybody else and we can make a special season here. If everyone does their part, we come together as a great unit and we all play in all three phases.’ So I think that they could be a very tough team and I think they can compete. It all depends on how they come to come together as a team in training camp.

“I would not count these Steelers out. I personally do not see them sit finishing on the bottom of the division, but we will see how it plays out, because that division is tough.”

The Steelers were counted out in 2019 after losing Roethlisberger just six quarters into the season. That year, Tomlin did his best coaching job yet, leading the Steelers to 8-8 with Mason Rudolph and Duck Hodges taking snaps under center. That team was built around a decent rushing attack and an elite-level defense. The Steelers are much improved offensively compared to that 2019 team, and still have a strong defense.

Count them out at your own risk, especially under Tomlin.