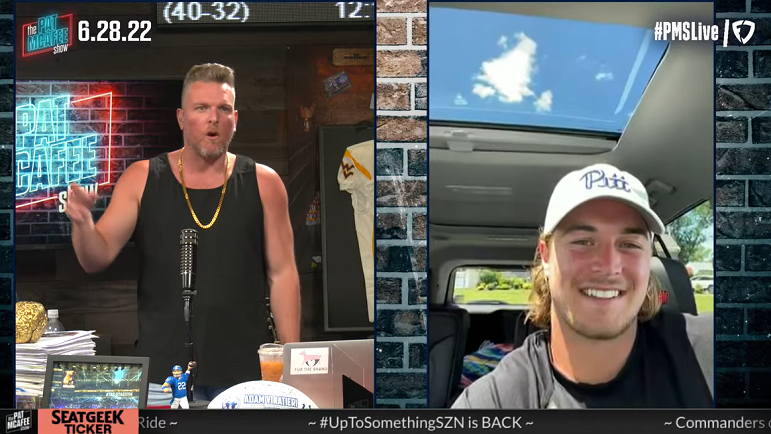 In just under one month, Pittsburgh Steelers rookie quarterback Kenny Pickett will step between the white lines of Chuck Noll Field for his first-ever training camp in the NFL with a chance to win the starting job for the black and gold.

After spending the last few months getting to know his new teammates and the playbook during OTAs and mandatory minicamp, Pickett — who appeared on The Pat McAfee Show Tuesday afternoon — stated that ahead of his first training camp, he’s using the downtime to prepare his body and his mind for the challenging few weeks ahead in Latrobe during Steelers’ training camp.

“I’m using this time really this month off that we have, the month off where you’re just training at home or training wherever you’re at, to get my body right, get ready for, the camp schedule and how many times I’m gonna be throw a ball a day and, and obviously gonna jump on the playbook and study film,” Pickett said, according to video via The Pat McAfee Show’s official YouTube page. “So I was gonna transition [anyway]. It’s been going really well and I’m putting a lot of time in, I think. That’s why it’s going well because of how hard I’m studying and trying to prepare. So I’m excited to get back to camp.”

"I wanna perform at the highest level I can & I'm putting in all the work I possibly can to be ready" ~@kennypickett10#PMSLive #HereWeGo pic.twitter.com/WhQtO0TiTY

That answer and type of mentality has to be music to Steelers’ fans ears. That’s exactly who Pickett was in college at the University of Pittsburgh, preparing like a mad man to ensure he was at his best on the field every time he stepped between the painted white lines. Now, after becoming the 20th overall pick in the 2022 NFL Draft, Pickett remains the same guy overall, working diligently on his craft.

Talk is cheap though, and the real test for Pickett will be throughout camp and in preseason action. He can prepare all he wants, but there’s no real preparing for something you’ve never quite experienced yet, which is an NFL training camp and real, NFL action. He’ll have to be up to speed mentally, because reps are going to be limited for the former Pittsburgh star — at least early — behind Mitch Trubisky and Mason Rudolph — in camp.

So far though, the transition to the pro game seems to be going well for the hometown favorite. Another big test awaits him though, which could make the transition a bit rocky, at least for the time being.