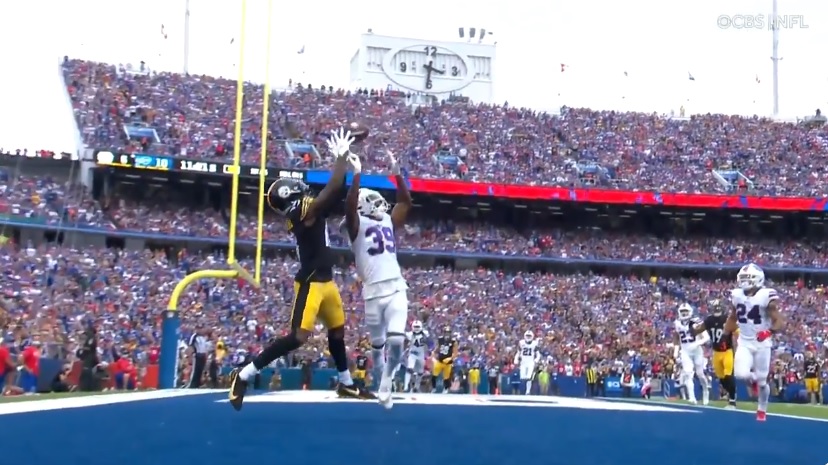 While listening to the PFF Fantasy Football Podcast with Ian Hartitz and Dwain McFarland, the conversation steered off-course of the scheduled Arizona Cardinals Team Preview to involve a specific Pittsburgh Steelers wide receiver heading into a pivotal 2022 season. Starting at the 44:17 mark of the podcast, which is also shown on PFF’s YouTube page, Dwain McFarland steers off-course of talking about Marquise Brown and the Cardinals WRs and goes into his fascinations surrounding Pittsburgh Steelers WR Diontae Johnson.

“Diontae Johnson? Absolutely a better player than Marquise Brown. To be honest, if Diontae Johnson was playing with Tom Brady, we would have him like WR3. I mean, he might be WR2,” McFarland stated on Johnson’s ability as a producer at the wide receiver position in fantasy football. “Dude, we would. I can guarantee you I would have Diontae Johnson in my top five WRs in fantasy.”

Is this a “hot take” statement by McFarland regarding Johnson and his talent level as a wide receiver? According to Fantasy Data, Diontae Johnson finished 2021 as the WR8 in fantasy football in PPR leagues, averaging 17.2 PPR points per game. Given the nature of Pittsburgh’s pass-happy offense. Johnson benefitted from Ben Roethlisberger hyper-targeting him in the short and intermediate quadrants of the field, racking up 169 targets which was tied for the second-most in pro football last season. However, the Buccaneers offense was extremely pass-happy as well with Tom Brady attempting an absurd 719 attempts last season, ranking first in the league. Thus, the argument could be made that Johnson could have been more efficient and just as targeted in Tampa Bay in 2021.

While McFarland wanted to sing Johnson’s praises, Ian Hartitz was quick to point out flaws in Johnson’s profile as a #1 WR, saying that Johnson wouldn’t have started on the 2021 Buccaneers. McFarland in response to Hartitz comes back in a strong way, promoting Johnson as the top 10 WR he is looking to get paid like this offseason after a strong 2021 campaign.

“I would take Diontae Johnson right now over Mike Evans,” McFarland continues when addressing Johnson. “Look, you know I like Mike Evans, but I would take Diontae Johnson as a young, ascending profile over Mike Evans. Absolutely. I mean, Diontae Johnson on any of these elite offenses would be in the top five. You give him any of these other quarterbacks, these up-tempo offenses. We are just worried that his offense is going to slow down. You got to deal with either a rookie QB or mitch Trubisky. Those are the risks with Diontae Johnson. His talent profile screams that he is already a top five, top ten receiver in the league to me. It’s just a matter of his situation.

Just a couple of days after Chase Claypool famously went on the I Am Athlete podcast with Brandon Marshall, LeSean McCoy and Adam Jones and called himself a top-three receiver in the league, McFarland opts to give that praise to Pittsburgh’s most productive wide out the last two seasons in Johnson. Putting Johnson over the likes of mike Evans who has never failed to post under 1,000 receiving yards in a season in his NFL career is some lofty praise, but Johnson figures to be a player on the rise like McFarland suggested. Removing the fantasy football component from the discussion, it would be intriguing to see exactly what Johnson could do in an offense like Tampa Bay, Buffalo, or Kansas City where he would be allowed to be paired with one of the premier QBs in the NFL and see what he could do.

While Ben has certainly fed Johnson plenty of volume during their time together, plenty of those targets are closer to the LOS due to the dink and dunk nature of the passing game that the Steelers have implanted the last few seasons. We have seen Johnson be able to win down the field as a deep threat, and the possibility of unlocking his full route tree with a franchise passer would allow Johnson to be utilized all over the field rather than as a short and intermediate target.

Still, Johnson’s poor metrics due to his usage are what Hartitz point to as the potential downside for Johnson who has benefitted greatly on volume during his time in Pittsburgh rather than efficiency.

“I would just like to see a top five WR talent maybe just average seven yards-per-target,” Hartitz responds to McFarland.

McFarland goes on to discuss how yards-per-target in often a stat that his heavily correlated to the WR’s quarterback and their performance as was discussed earlier with Ben Roethlisberger looking to get the ball out quick in the short passing game. While Johnson only average 6.9 yards per target last season, Ben Roethlisberger only averaged 6.2 yards per attempt which drops to 5.43 adjusted net yards per passing attempt according to Pro Football Reference.

It remains to be seen how Johnson will fare this season without Ben peppering him targets in the passing game like he has traditionally done to the X-receiver position in Pittsburgh’s offense, while the potential decrease in targets could be a concern for Johnson, the likely increase in his average depth of target as well as his usage down the field in the passing game could help boost his efficiency if OC Matt Canada plans to open up the offense more with Trubisky, Kenny Pickett, or Mason Rudolph likely under center as the team’s starting QB this season.

Diontae Johnson has shown us that he is indeed a talented WR in the NFL in his first three seasons. Whether or not he should be considered top ten or even top five is up for debate, but he will get his chance in 2022 to show that he belongs in that discussion due to his talent, not just his volume.

What are your thoughts on Diontae Johnson ahead of the 2022 season? Do you see his play dropping off without Ben Roethlisberger as the starting QB, or do you think that he could improve with a new passer under center for Pittsburgh this season? Where would you put Johnson as a talent as the wide receiver position in the NFL? Please leave your thoughts in the comments section below and thanks again for reading!