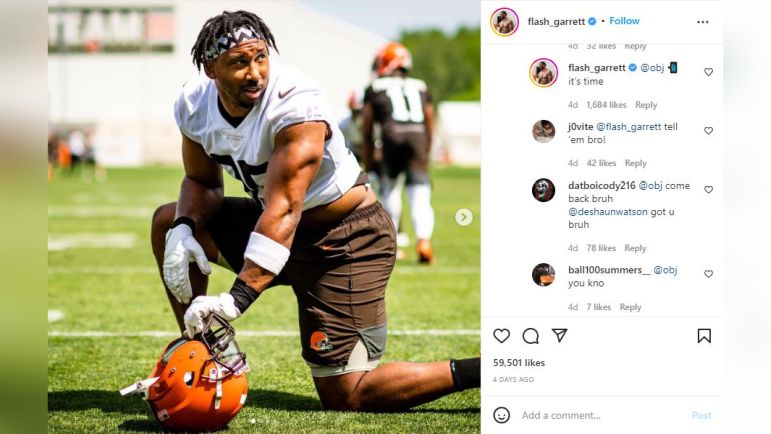 The Cleveland Browns took a step backward last year after making huge strides, reaching the playoffs and even winning. A lot of that had to do with the quality of play—and health—from the quarterback position, so they turned around and made a huge splash this offseason to get Deshaun Watson. Whether or not it drowns them remains to be seen.

Baker Mayfield, of course, is still on the roster. It was widely believed that issues between wide receiver Odell Beckham Jr. and the quarterback led to Beckham ultimately wanting to be traded, which ultimately culminated in his being released. He went on to win the Super Bowl with the Los Angeles Rams.

No matter what happens, Myles Garrett wants Beckham back. In fact, the wide receiver has always had a lot of support within that locker room. Garrett recently made a post on Instagram essentially recruiting him back, now a free agent. The post featured Garrett in the foreground with Beckham on the practice field behind him in the background. “Come Home The Fellas Miss You”, the post says.

In addition to the post being widely liked by many Browns players, including a lot of defenders, Beckham himself also replied to the post, saying “Who u talkin to slimeeee”, followed by a series of laughing with tears emojis. Garrett responded, “it’s time”.

Of course, time is relative as it pertains to Beckham, as he tore his ACL in February playing in the Super Bowl, so it would be a stretch to even assume that he would be ready to play at the start of the regular season for whomever he signs with.

Not only did the Browns release Beckham last season, they parted with Jarvis Landry this offseason as well, going another direction and instead making a big trade for Amari Cooper, who is now clearly their number one wide receiver. They also gave tight end David Njoku a top-five-salary extension.

The rest of the Browns’ wide receiver room most notably consists of players such as Anthony Schwartz and Donovan Peoples-Jones, a couple of their recent draft picks, as well as David Bell, drafted in the third round this year out of Purdue. They doubled down at receiver with Michael Woods II in the sixth round out of Oklahoma.

For me, the real question is, how much more can Watson get out of whatever wide receivers the Browns have than a healthy Mayfield had in the past? Especially this year, with Watson having not played in a year, and it yet to be determined what kind of suspension he might be facing.

Beckham is still 29 years old and he showed during his half of a season with the Rams that he is still capable of making plays. Even while returning from a torn ACL, I don’t suspect that he’s gearing up to take a bargain basement deal.