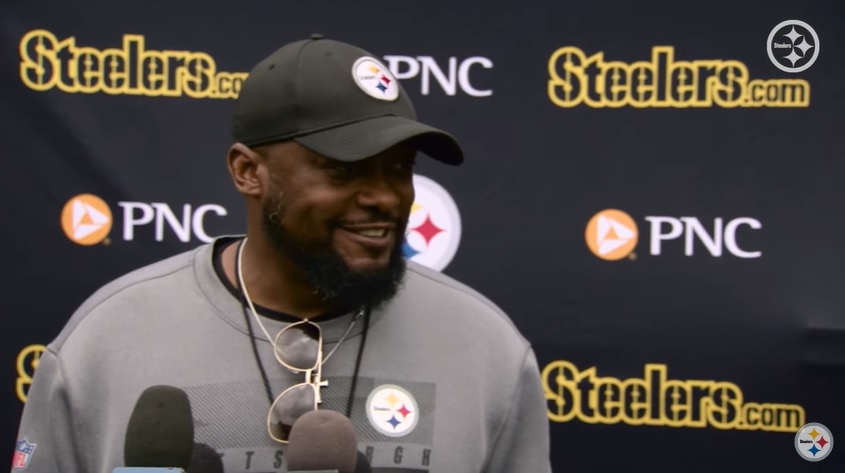 In ways that only Mike Tomlin can frame it, he’s honeymooning with Omar Khan these next few weeks. No word on where they’ll be visiting. Maybe Hawaii. Perhaps Paris. Or just a local bed and breakfast. Speaking with reporters Tuesday, Tomlin described what it’s been like working with Khan, officially hired to replace Kevin Colbert late last month, and other key personnel names like assistant GM Andy Weidl.

“We’re just dating right now,” he said via the team’s YouTube channel. “We went to dinner last night. It was great. We’ll be tested moving forward. There’ll be plenty of opportunities for that. But right now we’re honeymooning.”

Tomlin clarified the dinner included all the Steelers scouts. No word on if it included chicken wings. And a demerit taken away for Tomlin mixing metaphors with dating and honeymooning.

Khan is only the second Steelers’ GM Tomlin’s had to work with since being hired in 2007. He entered an organization with an established GM, then termed Director of Football Operations (Colbert jokes he only got the GM title so colleges would get him better seats at games), in Colbert, a Pittsburgh man hired in 2000. By that point, Colbert had already found the Steelers’ franchise quarterback and won a ring with him. After 40+ years in football, he stepped down after this year’s draft and was replaced internally by Khan, one of the few men who have been in the building longer than Tomlin. Khan was hired in 2001 and the two know each other well.

Weidl is a fresh outside face though like Colbert, he grew up in Pittsburgh, attending Mt. Lebanon High School and getting his first NFL job as a Steelers’ intern in the late 90s. He’s taken more of the traditional scouting route as opposed to Khan, who has a bit of that background but largely has been the Steelers’ “cap guy.” Weidl is a good complement to Khan as the two look to fill Colbert’s big shoes.

With Colbert no longer a key decision-maker, Tomlin’s influence and power has likely grown. The Steelers’ model will remain the same, collective and collaborative decisions, but an old-head like Tomlin certainly has more pull than he did before.

It’s been an unusual offseason for the Steelers, one full of change. A new GM and assistant GM, new other key front office personnel like Sheldon White and (reportedly) Mark Sadowski, a new DC, and of course, a new QB. Tomlin is the constant, the steady and stabilizing force. But his team needs results now in the middle of their longest playoff victory drought since the late 60s, a time when the Steelers were still lovable losers. No one wants to go back to those days. If they continue, Tomlin’s new-found marriage will end in divorce.