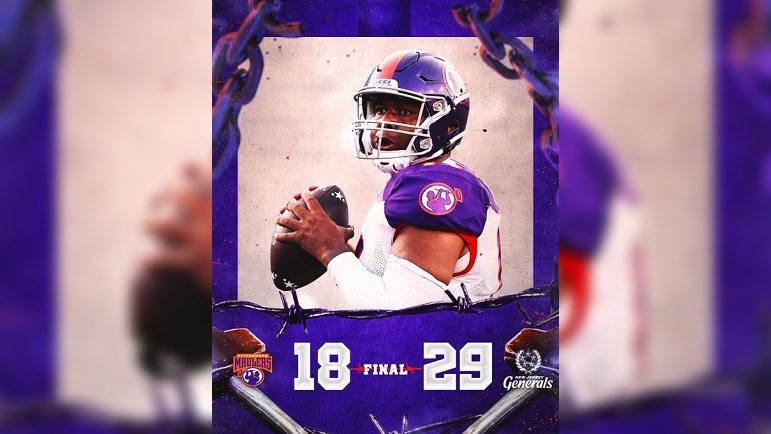 The Generals scored on the opening possession and never looked back. Taking advantage of strong field position following a Maulers’ penalty on the opening kickoff, New Jersey needed just five plays to find the end zone. QB Luis Perez completed his first two passes for 38 yards but the ground game capped things off with RB Darius Victor scoring from two yards out.

To the Maulers’ credit, they responded with a score on their first possession of the game, finding rare offensive traction. New Jersey’s kickoff went out of bounds, putting Pittsburgh at midfield. Former Slippery Rock alum Ronald Rivers (who also had a brief tryout with the Steelers), making his first start, fumbled the first snap of the game but recovered and hit WR Jalen McCleskey for a 21 yard gain.

The two teams traded punts to close out the first quarter.

New Jersey took the lead in the second quarter. Again, it was Victor, who carried the ball twice on the drive for 23 yards, his second tote finding his way into the end zone from seven yards out. With the extra point, the Generals took a 14-7 lead. New Jersey put together their longest touchdown drive on their next possession, going 89 yards on eight plays. Victor opened things up with a 20-yard run and then Perez finished the job, connecting with KaVontae Turpin for a 24 yard score, taking a short drag route down the left sideline.

Rivers threw an interception on the first play of the Maulers’ ensuring drive but the Generals fumbled the ball away and was recovered by Pittsburgh, erasing the mistake. Still, their offense found little life, going six plays before punting the ball back.

New Jersey added a 50-yard field goal before the end of the half, extending their lead to sixteen, 23-7.

Pittsburgh had one of its most impressive moments of the season in the third quarter when strong-legged kicker Ramiz Ahmed drilled one from 61-yards out, the longest make in the USFL this year.

While the Maulers kicked field goals, the Generals hit the end zone. On their ensuing possession, the Generals again strung together a long drive, going ten plays and nearly 70 yards. Victor found the end zone for the third time, this one from one-yard out. The two-point attempt was no good, keeping the score at 29-10.

Pittsburgh then turned the ball over on downs on three straight Rivers’ incompletions, stalling out at the Generals’ seven yard line. But their defense got a stop and the Maulers kept pushing. With six minutes left in the fourth quarter, Rivers hit Isiah Hennie underneath and let him to do the rest, outrunning several Generals’ defenders into the end zone.

Rivers completed the two-point try, making it a 29-18 game.

Pittsburgh kept the ball after converting the “alternative kickoff,” converting on “4th and 12” in a big way with an 18-yard completion from Rivers to McCleskey. McCleskey finished the day with two catches for 39 yards.

From there, the Maulers’ offense slowly moved down the field, including keeping their drive alive with a 4th and 1 conversion by RB Madre London. But the drive didn’t end in points with Ahmed missing from 49 yards out, a critical miss with three minutes left in the game.

The Generals ran out the rest of the clock in part thanks to a Maulers’ running into the punter penalty that allowed Perez to kneel the ball for the game’s final three plays.

With two games to go, the Maulers will take on the Philadelphia Stars next Sunday, June 12th at 7:30 PM. The Stars beat the Maulers in Week 2, 30-23. They’ll close out the year two weeks from now versus the Michigan Panthers.

NOTES: The Maulers are officially eliminated from playoff contention…Rivers went 18/38 for 218 yards in his first start…he also led the team in rushing…Generals’ QB Luis Perez finished 18/24 for 220 yards and a touchdown…New Jersey outgained Pittsburgh 380 to 290 and went a perfect 3/3 in the red zone while the Maulers went 1/2…the Generals move to 7-1 on the season and lead the North division…Pittsburgh’s 18 points tonight are the third-most they’ve scored in a game all season…they’ve yet to eclipse 23 points in a game…defensively, the Maulers were led by Bryce Torneden, who registered 14 total tackles (8 solo)…the Generals were led by their ground game with RB Darius Victor carrying the ball 17 times for 87 yards and three scores.