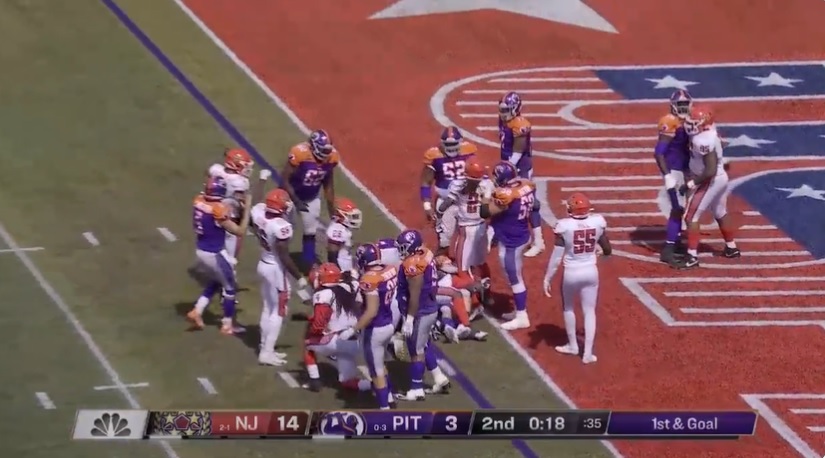 The Pittsburgh Maulers aren’t mauling much of anyone this year. The only streak they’ve been on is a losing one, still searching for their first victory following a 21-13 loss to the New Jersey Generals Sunday afternoon. Thirteen points are the second-most recorded by the team in their first four games of the year, which sums up why this team has been so listless all season.

Both teams traded punts across the first three possessions of the game. But the Generals only needed two plays late in the first quarter for the game’s first points, QB De’Andre Johnson finding WR Alonzo Moore for a 62-yard score. The Maulers’ defense blew a coverage and Moore walked into the end zone.

.@DredaDon14 finds a WIDE OPEN @alonzomoore0765 for his first TD pass of the season!

Pittsburgh’s offense got on the scoreboard thanks in large part to great field position. Starting a second-quarter drive at the Generals’ 45, the Maulers needed seven plays to go 16 yards. But kicker Ramiz Ahmed pushed a 47-yarder through the uprights to make it 7-3.

Both teams found the end zone on their next possession thanks to long touchdown drives. New Jersey responded with a 15-play, 75-yard display, capped off by a seven-yard rushing score by RB KaVontae Turpin. Pittsburgh’s offense sustained a drive for the first time with QB Kyle Lauletta leading the charge with his arm with completions of 12, 12, and 13 yards. Penalties also highlighted the drive, including back-to-back flags on the Generals’ defense, one for unnecessary roughness and another for pass interference, that put the ball on the one yard line. Running back Garrett Groshek took the ball over the goal line from one yard out. Groshek finished the day with just 37 yards, averaging 2.6 per carry.

Lauletta was the only quarterback to play on the day for Pittsburgh, supplanting Josh Love. But Lauletta’s stat line didn’t look pretty, completing fewer than half his passes for just 169 yards and no touchdowns.

New Jersey opened the third quarter with their third touchdown drive. Kick returner Cam Echols-Luper offered a special teams jolt with a return to the Maulers’ 34. The Generals’ offense took it from there, finding the end zone seven plays later on with a Darius Victor three-yard rush, making it a 21-10 game.

Head coach Kirby Wilson attempted a 55-yard field goal with Ahmed on his next drive, but the kick was no good. Ahmed redeemed himself with a 39-yard make in the fourth quarter, but the Maulers’ offense wasn’t able to close the gap any more. Pittsburgh got the ball back with 2:33 to go but Lauletta’s 4th and 3 pass for Branden Mack fell incomplete. New Jersey closed the door from there.

The Maulers will take on the Houston Gamblers next Sunday at 4 PM. Houston is currently 1-2 on the season with their Week 4 game to be played tomorrow. New Jersey has won three in a row to move to 3-1 on the season.

Notes: The Maulers have scored a combined 39 points in four games, an average of 9.8 per game…Pittsburgh WR Tre Walker was the team’s offensive star of the day, catching nine passes for 110 yards on a whopping 17 targets. He also had a 50-yard TD called back due to penalty…neither team recorded a turnover…Kyahva Tezino and E.J. Ejiya tied for the team lead with 11 tackles each…New Jersey dominated the TOP battle, 34:38 to 25:22…the Generals split time at QB between Johnson and Luis Perez, completing a combined 83.3% of their passes (20/24)…the Maulers are the USFL’s lone winless team and have been outscored 92-39 this season…only one other team in the league has scored under 60 points this season, the 2-1 Tampa Bay Bandits.