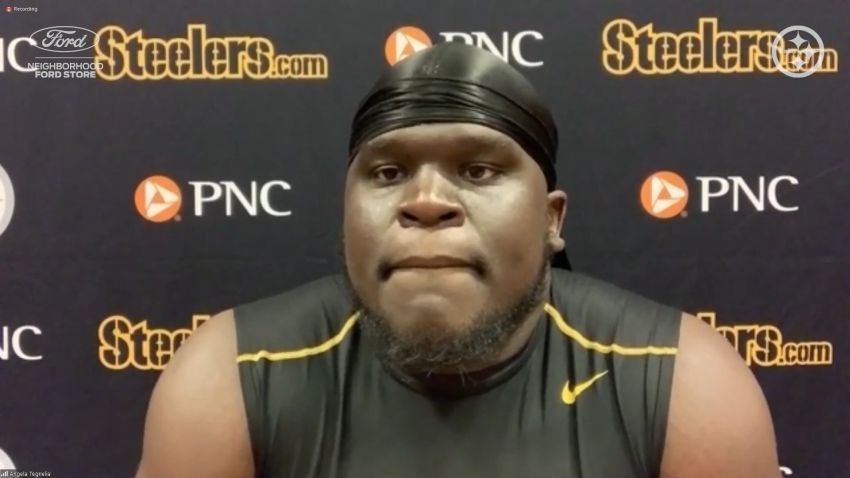 While OG Kevin Dotson may be considered a spring chicken when compared to other grizzled veterans on the roster like Cam Heyward and Tyson Alualu, the physicality of the NFL game can have an impact on even the freshest rookies coming out of college.

Dotson spoke on Steelers Nation Radio Wednesday with Arthur Moats and Wes Uhler on several topics including working with new OL Coach Pat Meyer as well as the new names on the offensive line. When asked about his offseason and if he was doing anything different this year compared to his previous offseason in 2020, Dotson addressed a key aspect all athletes need to focus on that is often neglected: recovery.

“Definitely had way more rehab stuff than I did my first year, and I got hurt this year,” Dotson responded to the question about his focus this offseason. “So, you know, I had to do more rehab, but I definitely added more recovery to my stuff. That’s kind of something that you learn when you get around the old heads, they kind of tell you how they do that stuff.”

As a certified sports performance specialist, having worked with the likes of the Arkansas Razorbacks, Florida Gators, and the Iowa Hawkeyes, I can firmly attest for the need to add recovery work to any holistic athletic training program, regardless of the sport. In the case of a physically demanding sport like professional football, recovery is of the utmost importance in order to keep the body functioning at peak capacity and minimize the potential for injury down the road.

Dotson recognized that he didn’t pay much attention to rehab work in his first NFL offseason in his rookie year and following that up with stating that he got hurt this past season, having suffered an ankle injury that ended up landing him on the Injured Reserve list this past season which caused him to miss the final stretch of the 2021 campaign. After suffering that setback last season, it appears that Dotson has learned that it’s better to approach rehab and recovery from a preventative standpoint rather than deal with hit when an injury occurs.

“I used to be really cheap with it,” Dotson continued. “Like, I don’t want to go here and do this. I would just go home and take a nap. Now I’ll spend some bread on it. I do four or five things throughout the week.”

Maybe Dotson could get away with “just taking a nap” back in high school or early on in college when his body was at its peak in terms of development and recovery from training or playing games, but Father Time has a funny way of catching up with all of us after a while. Thus, it appears that Dotson has taken on that veteran approach of investing more time and money into his body in order to maximize his performance and make it through a brutal 17-game NFL regular season (not factoring in preseason games, practices, and potential playoff appearances) unscathed.

If Dotson needs any real-life examples of the importance of proper rehab and recovery to prolong one’s NFL career, he just needs to look to former Steelers All-Pro OLB James Harrison who took rehab and recovery to another level. According to a report by ESPN’s Jeremy Fowler back in 2017, spending $300,000 annually on specialists that specialize in acupuncture, dry needling, massage therapy, chiropractic, and cupping.

This isn’t a suggestion for Dotson to drop most of his salary on these services but seeing as NFL players rely on their bodies to perform well on the field and earn lucrative contracts to make a living, investing in proper treatment and recovery programs during the season as well as in the offseason can help maximize their ability on the field as well as potentially prolong their NFL careers. It worked for Harrison, who managed to play to the age of 39 and establish himself as one of the best pass rushers in the 2000s despite being an UDFA on of Kent State.

For Dotson who is entering a pivotal third season with Pittsburgh, his best ability may be his availably in terms of holding off any competition to secure the starting LG spot for 2022.