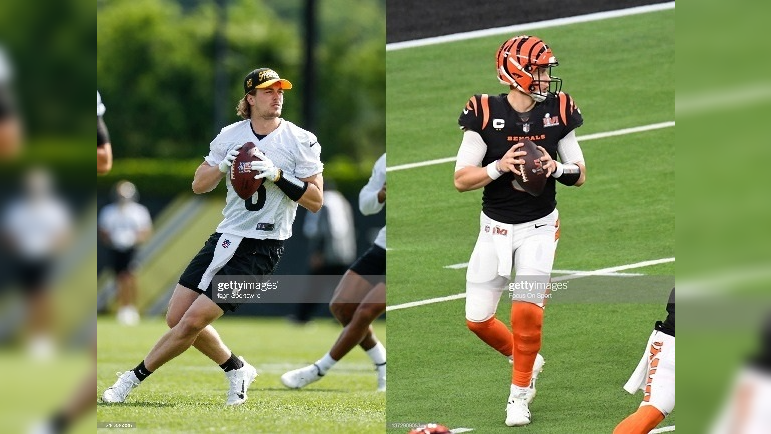 The rise of Cincinnati Bengals’ quarterback Joe Burrow has been a meteoric one, dating back to his second season at LSU.

Burrow, then a transfer from Ohio State, used his second season as the starting QB for the Tigers to rip off a historic season, winning the Heisman Trophy, leading LSU to the national championship, and setting a number of college football passing awards before becoming the No. 1 overall pick in the 2020 NFL Draft.

Two years later, after watching Burrow lead the Bengals to the Super Bowl, the Pittsburgh Steelers are hoping first-round draft pick Kenny Pickett’s meteoric rise continues on the same path as Burrow’s, a player whom Pickett has been compared favorably too since he became a Heisman Finalist for the Pitt Panthers, won the ACC, and became the first quarterback off the board in the 2022 NFL Draft.

Steelers Depot’s own Jonathan Heitritter compared Pickett to Burrow upon his selection by the Steelers at No. 20 overall, as did former NFL running back LeSean McCoy and former Steelers’ GM Kevin Colbert.

Now, Pickett’s personal QB coach in Tony Racioppi has joined in on the Burrow/Pickett comparisons. Appearing on 93.7 The Fan’s Cook and Joe Show Tuesday with hosts Joe Starkey and Ron Cook, Racioppi stated that he sees so many similarities between the two, including their mechanics, mentality and overall leadership styles.

Check out this comp…

“I think the Joe Burrow one [comparison] is legit,” Racioppi said to Cook and Starkey, according to audio via 93.7 The Fan. “So I just think the way they both throw it, they’re both better athletes and people think they’re both accurate. They both process information so well, they’re both ultra competitive dudes. They’re both quick processors.

“Joe was a coach’s kid. Kenny’s Dad didn’t coach him in high school, but Kenny’s Dad coached from growing up and Kenny’s dad was a Hall Famer at Shippensburg. He’s been around that kind of stuff his entire life,” Racioppi added, according to audio via 93.7 The Fan. “So they’re ultra confident without being cocky, kind of how you want your quarterback, right? I would say the magnet in a room, if they walk in a room, everybody kind of gravitates towards them. They’re very similar in that way.”

That seems to check out overall, at least based on the limited exposure Pickett has had as a Steelers since being drafted in late April. While Burrow is certainly flashier off the field with his outfits, they are both calm, cool and collected, and very measured with their words while still projecting that outward confidence in their abilities.

Athletically, they are very similar as they move well, have good overall pocket mobility and throw with great anticipation. Neither has the biggest arm, but the ability to win above the neck has separated Burrow in recent seasons, and that’s what Pickett is aiming for in his NFL career as well.