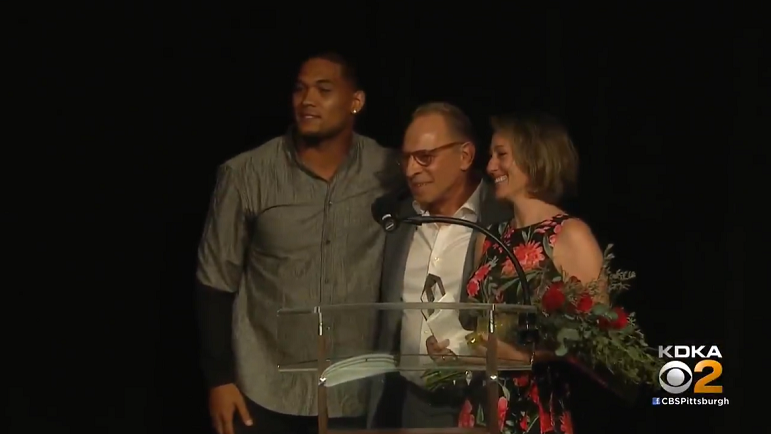 Former Steelers’ RB James Conner was back in Pittsburgh over the weekend to present the James Conner Courage Award at the seventh annual Dr. Stanley Marks Blood Cancer Research Foundation Dinner to his former nurse, Carrie Richards. Richards treated Conner when he was going through treatment for Hodgkins Lymphoma when he played at Pitt, and now Richards is currently going through the same thing after also being diagnosed with Hodgkin’s Lymphoma.

“Everything is just special about tonight,” Conner told KDKA. “It’s good to be back in Pittsburgh, and it’s a big honor for me.”

The Dr. Stanley Marks Blood Cancer Research Foundation Dinner provides an opportunity for people who have gone through the cancer treatment process and beaten it to come together with those who are still undergoing the treatment process. Marks is the chairman of the UPMC Hillman Cancer Center and is also a Clinical Professor of Medicine at the University of Pittsburgh School of Medicine.

Conner was the recipient of the Courage Award back in 2016, after his final season at Pitt when he returned to the field after beating cancer. That season, he ran for 1,092 yards and 16 touchdowns en route to being selected in the third round by the Pittsburgh Steelers in the 2017 NFL Draft.

Richards, who Conner presented the award to, wasn’t aware he was coming back to give her the award. “What you accomplished is absolutely incredible without having cancer and after going through it, I just want you to know that I know how amazing it is that you were still able to accomplish your dreams and that is so inspiring for the rest of us,” Richards told Conner and the rest of the crowd gathered at Heinz Field.

The dinner was Conner’s first time back in Pittsburgh since signing with the Arizona Cardinals last offseason. Conner had an impressive year in Arizona, running for 752 yards and 15 TDs while adding 375 receiving yards and three touchdowns through the air. That performance earned him a three-year contract extension with the Cardinals, and he’s likely to have a bigger role in Arizona with RB Chase Edmonds leaving in free agency.

Conner’s philanthropy and off the field work carried over from his college days to his NFL career, and he’s a player that I’ll always root for to succeed, no matter what team he’s on. He was a model citizen while playing in Pittsburgh, and it’s been great to see him revitalize his career in Arizona. I’ll be hoping he puts up a repeat performance of his 2021 season in 2022.