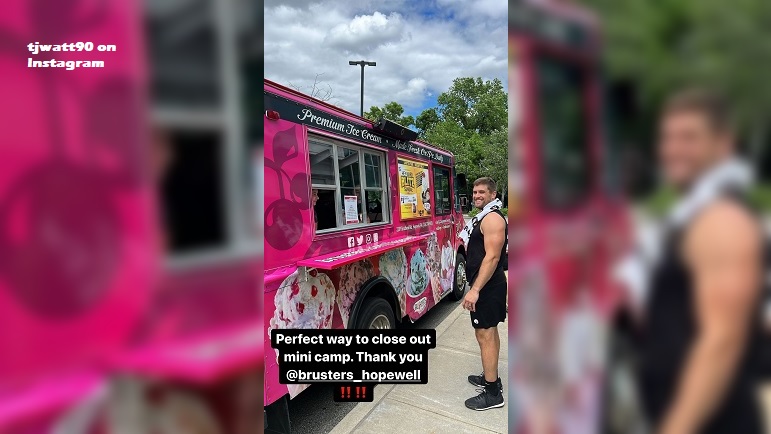 Those Watts are good people. As has apparently become tradition at the Pittsburgh Steelers’ facility, T.J. Watt handed out free ice cream courtesy of Bruster’s to members of the organization and media during the team’s final spring practice before breaking for the next seven weeks, not returning until the team reports for camp in late July.

The PPG’s Brian Batko tweeted the news and offered some sprinkles of details. The tradition has apparently been passed down from Ryan Switzer to Josh Dobbs and now to Watt.

Steelers’ last day of minicamp means free ice cream out front from @hopewellbruster, courtesy of TJ Watt. That was Ryan Switzer’s move originally, then Josh Dobbs carried on tradition, now TJ is hooking it up.

Let’s just hope Watt handling the duties isn’t an omen for him to be gone next year. Switzer and Dobbs stopped not because they wanted to but because they were no longer with the team. I like Watt’s chances of staying.

Watt shared this photo on Instagram of the ice cream truck with brother Derek Watt excited for a free scoop.

T.J. Watt hooked the team up with @hopewellbruster ice cream after mandatory minicamp came to a close on Thursday #Steelers #NFL #HereWeGo pic.twitter.com/m7AyWwj1v3

Watt has emerged as a team leader not only in action but with his words. He’s still more reserved than other players on the roster but has become not only one of the faces of the defense but faces of the franchise. Watt and the Steelers’ defense will be counted on in a big way in 2022, supporting an offense that’s likely to struggle with so much youth and uncertainty.

Watt will look to best his Defensive Player of the Year winning 2021 season, one that saw him tie the NFL record with 22.5 sacks. Barring injury, he’s almost certain to break the Steelers’ record for most career sacks, needing just nine to surpass James Harrison’s 80.5. When that happens, it’ll be worthy of another celebration. Maybe with more ice cream.