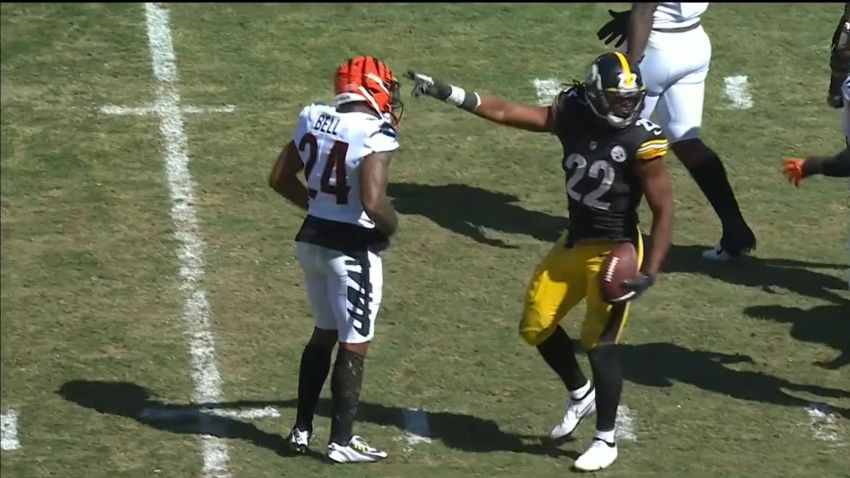 Pittsburgh Steelers’ second-year running back Najee Harris is already a household name in the NFL, especially after coming off of a rookie season in the Steel City filled with highlight-reel plays and franchise-history-making production.

A true bellcow in every sense of the word in the Steelers’ backfield, Harris profiles as the next wave of dual-threat running backs in today’s NFL, one that can single-handedly carry an NFL offense for stretches. That’s largely why the Steelers were interested in him in the 2021 NFL Draft, grabbing him at No. 24 overall out of the University of Alabama.

The sky is the limit for Harris in terms of on-field production and off-field attention (in a good way), for seemingly everyone associated with the NFL, aside from former NFL offensive lineman, radio broadcaster and podcast host Ross Tucker.

Tucker, a rising star in the media landscape, appeared on 93.7 The Fan’s morning show with hosts Colin Dunlap, Chris Mack and producer Adam Crowley and stated that he believes Najee Harris will never be a top 5 running back in the NFL — despite liking him a great deal — citing his lack of explosiveness.

“When I watched him last year, I didn’t really see a special player.”

Tucker is very, very good at his job, but that’s quite the take from him on The Fan.

Statistically, Harris wasn’t as flashy as some other great names at the position in the league, but a lot of that was due to a porous offensive line in front of him that consistently had him taking contact in the backfield, leading to some rough sledding overall.

Quite honestly, Harris is exactly what Bell was for the Steelers, though Bell was on a much better team overall behind a great offensive line and an offense that featured Antonio Brown at receiver at the peak of his powers.

Tucker doubled down on his take, adding that he doesn’t believe that Harris has the explosiveness or the ability to make defenders miss (despite leading the league in forced missed tackles on runs and catches last season) to be a top-flight back.

“I’m just talking about when he had the ball. I didn’t see like rare power. I didn’t think he made many people miss. I didn’t see a whole lot of explosiveness. I thought he was fine,” Tucker added, according to audio via 93.7 The Fan. “I mean, I thought he was a good rookie starting running back, but I don’t think we’re ever gonna be talking about him as the best running back in the NFL. I don’t know that we’ll ever talk about him as one of the five best in the NFL.”

Is not talking about Harris as one of the five best in the NFL, in today’s game, that much of a knock? Personally, I don’t think so. He’s without a doubt a top 10 running back in the NFL for his abilities on the ground and through the air. He makes defenders miss at an elite rate, and has insane power overall for a man his size.

Harris is not a guy that is going to rip off 20+ yard runs. That’s just not his game; it hasn’t been going back to college at Alabama. What he is though is a consistent, productive running back that is a true hammer between the tackles. He will bludgeon defenses over and over again, and will wear teams down. That’s what the Steelers want, top 5 discussion be damned.